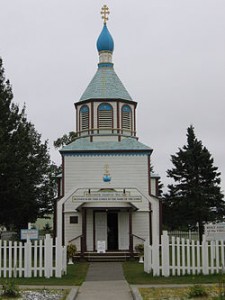 Church of the Holy Ascension (photo from Wikipedia)

In part six of the series of oldest churches in every state, we are finishing in the Great Plains and the Pacific Northwest. Christianity was introduced to much of this area by Roman Catholic missionaries, although many of these churches were also established by settlers coming from the east (often in pursuit of Gold Rushes).  The biggest exception is Alaska, which, while still a Russian territory, was home to the first Eastern Orthodox churches in the in United States.  Here are the sixth ten churches in the series, from Kansas to Alaska.

White Church Christian Church is the oldest standing church in the state of Kansas.  It was originally established as a mission to serve the local Native American tribes.  Originally called White Church, the local community was later named White Church after it.  The current building largely dates from a reconstruction in 1904.  In 1931, after more than a century, the congregation disassociated with the Methodists and in 1856 officially became affiliated with the Disciples of Christ.

The current incarnation of the White Church Christian Church was built from stone to better withstand future disasters. The church is graced with more than twenty stained glass windows dedicated to founders and early members of the congregation.

Renner Lutheran Church, also known as the Renner Lutheran Sanctuary, is the oldest surviving church in South Dakota.  Built by the Scandinavian Lutherans who settled throughout the Great Plains in the 19th century, the church is famous for having overcome destructive storms and several relocations on more than one occasion.  Renner Lutheran Church was added to the National Register of Historic Places in 2009.

Renner Lutheran Church is a larger than normal frontier church considering the time and place it was built. At the time of its reconstruction, the exceptionally tall bell tower was reduced to a less impressive but more manageable sixty feet.  The beautiful hand-crafted altar dates from the 1880s.

The Old Stone Church is possibly the oldest surviving church in North Dakota (another claimant is Glencoe Presbyterian Church).  Completed in 1885, it was only used as a church for about half a century.  Though no longer used for worship, it is in an excellent state of preservation.  In 1985, a century after its completion, the Old Stone Church was turned over to the Buffalo Historical Society which now operates it as the Old Stone Church Heritage Center.  It was listed on the National Register of Historic Places in 1996.

The Old Stone Church is literally a Gothic style stone church that looks as though it were lifted out of late medieval England (an extreme architectural rarity for the American frontier at the time).

The First United Methodist Church of Cheyenne is the oldest church in Wyoming.  It was constructed in the 19th century to serve the early railroad community that became established in the territory following the Civil War.  The current church was completed in 1894 and expanded twice, once in 1928 and again in 1950.  First United Methodist Church was added to the National Register of Historic Places in 1975.

First United Methodist Church is a large, red sandstone Neo-Gothic structure which actually looks as though it were constructed at a much later date (much of the church dates from additional construction in the 20th century).  It is known for its extensive stained glass windows, which were a rarity on the frontier at the turn of the century.

St. Mary’s Mission is the oldest church in Montana, and the first building of the first permanent settlement in the state.  It is also one of the largest surviving 19th century log churches in America, and one of the most important and popular historic sites in Montana.  St. Mary’s Mission was added to the National Register of Historic Places in 1970.

St. Mary’s Mission is a large log-built structure typical of the frontier region. However, the façade was finished to resemble a traditional white New England clapboard structure.  The mission complex consists of several buildings, including the chapel and an adjacent residence, as well as the original pharmacy and other facilities.  A visitor center at the site also houses a museum.

The Cataldo Mission, or Mission of the Sacred Heart, is not only the oldest church in Idaho, but also the oldest standing building in the state.  Although no longer in active use, the well maintained mission church is now part of the Old Mission State Park, which preserves much of the old mission compound.  The Cataldo Mission was designated a National Historic Landmark in 1961 and listed on the National Register of Historic Places in 1966.

The original Cataldo Mission was a structural curiosity, being constructed of wattle and daub and without the use of nails. Unusual materials were used on the completion of both the exterior and interior, including tin cans and newspapers.  Some of these unusual construction elements were carried forward to the current church.  A small upper floor with living quarters is tucked away above the mission church.

The St. Paul Roman Catholic Church is the oldest church in the state of Oregon.  It is also one of the oldest brick structures in north of California.  Among the very last states to receive a Christian community, this parish in Oregon helped to complete the march of the Roman Catholic Church across the United States.  The St. Paul Church was listed on the National Register of Historic Places in 1979.

St. Paul Roman Catholic Church is believed to be the oldest brick built structure in the Pacific Northwest. Much of the current church was rebuilt with steel reinforcement following an earthquake that struck the area in 1993.

The Claquato Church is the oldest surviving church, and building, in the state of Washington.  Abandoned for nearly a century after the county seat moved away, the church survived relatively intact, long enough to be rehabilitated in recent decades.  The small frontier church stood empty for the better part of eighty years before the local community decided to revive it.  Claquato Church was restored in the 1950s, and in 1973 was added to the National Register of Historic Places.

The Claquato Church is a traditional frontier church recalling the architecture of the early churches of Colonial New England. It boasts among its fixtures original handmade pews and pulpit.  Claquato Church is located along the historic Oregon Trail.

CHURCH OF THE HOLY ASCENSION

The Church of the Holy Ascension was the first parish of the Russian Orthodox Church to be established in what is now American territory.  Along with the Holy Assumption of the Virgin Mary Church in Kenai, it was from here that Eastern Orthodox Christianity spread throughout Alaska and later down the Pacific coast towards California.  The Church of the Holy Ascension was designated a National Historic Site and listed on the National Register of Historic Places in 1970.

The Church of the Holy Ascension stands at the foot of rolling green hills a short distance from the oceanfront. It is a large wood frame building of mixed architectural styles dominated by Orthodox elements including a pair of green onion domes.  The church and its graveyard are enclosed with a white picket fence.