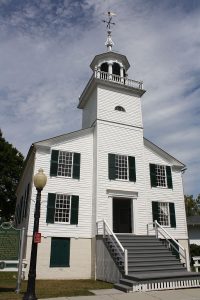 In part three of the series of oldest churches in every state, we will be exploring the Midwest. This region, which was settled in earnest after the American Revolution, enjoys a strong mixed religious heritage.  In addition to the English-descended colonists, many immigrants from France, Germany, Central Europe and Scandinavia made their way here, dotting the landscape with churches as they went.  Here are the third nine churches in the series, from Ohio to Missouri.

The West Union Presbyterian Church is the oldest church building in Ohio that is still in use. It is also home to one of the oldest Presbyterian congregations in the Midwest, and is closely associated with former governors of both Ohio and Kentucky.  Among its founders was then Ohio state senator Thomas Kirker, and who later served as the second governor of Ohio.  Thomas Metcalfe, a future governor of neighboring Kentucky, participated in the church’s construction, which was completed in 1810.

West Union Presbyterian Church looks a lot younger than two centuries in age. Its broad front and relatively low roof gives it a distinctly modern look, though its brickwork and old-fashioned bell tower clearly reflect its much older age.

The Rehoboth Church is a very small, simple log structure in an amazingly good state of preservation. Although it has its original roof, the entire structure is sheltered by a second metal canopy suspended over the church.  A small scattering of very old gravestones, remnants of its original cemetery, surround the building.  There is a small museum on the site.

The Mission Church of Mackinac Island is the oldest surviving church in Michigan and possibly the oldest surviving Congregational church outside of New England.  Built to serve Protestant settlers who worked in the fur trade, it was later used by the tourism industry to serve summer resort guests to the island.  It was added to the National Register of Historic Places in 1971.

The Mission Church is one of the iconic buildings of Mackinac Island. Its architecture hearkens back to the old colonial churches and meetinghouses of the 18th century.  Its most distinguishing and memorable feature is the unusual bell tower which has a small external deck that surrounds the weather-vaned belfry.

The Little Cedar Grove Baptist Church in Brookville is the oldest standing church in Indiana and one of the oldest surviving Primitive Baptist churches in the United States. It is also home to one of the oldest Protestant congregations originally founded in the French Louisiana Territory.  The current church was completed in 1812, and has been in use ever since.  It was listed on the National Register of Historic Places in 1990.

Little Cedar Grove Church doubled as a fortification against attacks and raids when Indiana was still deep into the American frontier. One truly interesting feature of the church are the rifle ports built into the walls to aid in the defense of the building.  The small interior sanctuary still has some of its original wooden fixtures.

CHURCH OF THE HOLY FAMILY

The Church of the Holy Family in Cahokia is the oldest surviving church in Illinois as well as one of the oldest continuously active Catholic parishes in the country. It is also one of only a handful of log-built Catholic churches still standing in America.  It was declared a National Historic Landmark and listed on the National Register of Historic Places in 1970.

The Church of the Holy Family is an extremely rare log-constructed building with the logs arranged vertically. The white sealing material alternates with the brown wood to form a vertical stripe pattern on both the interior and exterior walls.

The St. Joan of Arc Chapel is, by a strange technicality, the oldest church standing on American soil.  Constructed sometime in the 15th century, it actually predates the discovery of America.  However, thanks to the efforts of an eager young architect and the sponsorship of a wealthy American family, it was relocated from its ancient home in France to be part of an estate in New York.  It ultimately ended up in Wisconsin, where it now stands on the campus of Marquette University.  Still in use as a Catholic place of worship, it is now part of the Archdiocese of Milwaukee.

St. Joan of Arc Chapel is one of the few major collegiate chapels that is in fact a true small chapel and not a hulking cathedral quaintly called a chapel. Built perhaps as early as the 1430s, this purely medieval building may in fact have been contemporary with the life of the French heroine.  A stone set in the floor is said to have been knelt on by Joan of Arc herself.  The chapel is home to other treasures as well, including the tomb of a French knight.

St. Peter’s Catholic Church is the oldest church in the state of Minnesota. Originally a mission in one of the state’s first settlements, it is also among the oldest continually active congregations in the northern Great Plains.  It was recognized by the Minnesota Historical Society in 1973.

St. Peter’s Catholic Church is a stone built church that was fairly large for the area in the mid-19th century.  The original is mostly intact, though the steeple has been replaced.  The church’s original cross is now on display inside the church.

St. Anthony’s Church is the oldest surviving church in the state of Iowa, as well as home to that state’s second oldest Christian congregation. It is also one of the oldest churches in the American Great Plains west of the Mississippi River.  St. Anthony’s was a key missionary site that helped the Roman Catholic Church to expand in the region.  Both the church and its school were incorporated into the St. Anthony’s Roman Church Complex in 1984 on the National Register of Historic Places, and on the Davenport Register of Historic Places in 1992.

St. Anthony’s Church (the 1853 building) is known for its artwork, which focuses on Jesus healing the sick and the raising of Lazarus from the dead. The original building from 1839 is also still standing and still in use for other church purposes.

Old McKendree Chapel is a surprisingly well-preserved log structure. To protect it from the elements, it has been raised up several feet on stone pillars and a metal frame supporting an external shelter has been erected over the roof.