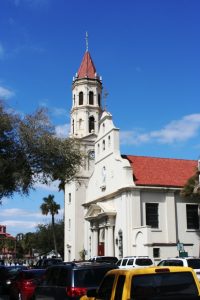 In part two of the series of oldest churches in every state, we will be exploring the Southeast (actually the coastal southeast plus Puerto Rico). Like the Northeast, this area boasts some very old churches, thanks both to the early Spanish settlements in and around the Caribbean Sea as well as some of the earliest English settlements outside of New England.  Here are the second nine churches in the series, from Delaware to Florida (plus Puerto Rico).

The Holy Trinity Church of Wilmington, also known as Old Swedes, is the oldest Lutheran-built church still standing in the United States. It is also among the oldest churches in continuous in America.  Although acquired by an Episcopal congregation in the late 18th century, it is still considered to be of great historic importance for American Lutherans.  Old Swedes was designated a National Historic Landmark in 1961 and was added to the National Register of Historic Places in 1966.

Holy Trinity Church is one of the oldest brick buildings still standing in the United States. The main building is built of hewn stone, with a red-brick bell tower that dates from a later period.  The church interior is noteworthy for its brilliant, vibrantly colored stained glass window featuring the holy family, set amidst an otherwise completely whitewashed interior.  The grounds of the church are also home to the original church burial yard, meditative labyrinth and the Hendrickson House, a 17th century farm that is now run as a museum.

Old Trinity Church, the namesake for Church Creek, Maryland, enjoys the distinction of being the oldest fully intact church in continuous use in the United States, and is among the oldest surviving churches overall.  Founded as a parish of the Church of England in 1675, it remains actively in use by the Episcopal Church.

Old Trinity Church is home to a pulpit oddly placed not at the front of the church, but on the left side amidst the pews. Among the church’s historical treasures is an original 1611 King James Bible.  William McClelland, a 20th century Episcopal bishop, is buried beneath the church.

St. John’s Episcopal Church is the most historic church in Washington DC thanks in large part to its excellent location on Lafayette Square directly across the street from the White House.  As the closest church to the White House, St. John’s has been attended by every sitting president since James Madison, earning it the nickname the “Church of the Presidents” (not to be confused with the similarly nicknamed church in Quincy, Massachusetts).  In particular, it is closely associated with Abraham Lincoln.  St. John’s was named a National Historic Landmark in 1960 and was added to the National Register of Historic Places in 1966.

St. John’s Episcopal Church is home to a small trove of Americana, from the American eagle standing beside the pulpit to the church bell cast by Paul Revere. What everyone comes to see, however, are two pews: the presidential pew (pew 54), and the pew in the back where Abraham Lincoln used to sit, which is marked with a plaque.  One of the church windows was designed as a memorial to the wife of President Chester Arthur.

The Jamestown Church is one of the claimants of America’s oldest church, and it does in fact hold several records.  Jamestown was the site of the first permanent English-speaking Christian parish in North America, not counting the lost Roanoke colony; and the church bell tower is the second oldest Christian structure in the United States after the San Miguel Chapel in Santa Fe.  It was added to the National Register of Historic Places in 1966, and designated a Virginia Landmark in 1983.

The Jamestown Church is a very unusual structure. Both the original surviving tower and the 1907 recreation of the main building are built of red brick, with unfinished red brick interior walls, which is incredibly uncommon in church architecture.  The entrance to the church is through what remains of the tower, possibly the oldest English-built structure still standing in the United States.  The main sanctuary is decorated throughout with commemorative plaques.  The church is surrounded by a small cemetery where most of the early settlers are buried.  Among the memorials here are statues to Captain John Smith and Pocahontas.

St. Thomas Episcopal Church is the oldest standing church in North Carolina, and one of the oldest continually active churches in the South.  It is the parish church of the town of Bath, one of North Carolina’s oldest settlements.  It was added to the National Register of Historic Places in 1970.

St. Thomas Episcopal Church is a small, very simple red-brick colonial structure surrounded by a graveyard. Some of the oldest burials in North Carolina can be found here.

Old St. Andrew’s Parish Church is the oldest church in South Carolina and one of the oldest buildings in the South.  Although technically located in Charleston, it is actually across the Ashley River a few miles from the historic district.  St. Andrew’s location played a small role in the expansion of the original Charles Town settlement.  It was listed on the National Register of Historic Places in 1973.

St. Andrew’s Parish Church is one of the best preserved early Colonial churches in the American South. It has a cruciform floor plan, highly unusual for non-Catholic churches of the era.

Jerusalem Lutheran Church is an elegant brick building in amazingly good condition considering that it was largely abandoned for the better part of a century. An unusual feature of the exterior is the church clock, which is not part of the bell tower, but which is strangely embedded in the brick wall above the main entrance.

The Cathedral Basilica of St. Augustine is the oldest Catholic parish in America as well as the oldest cathedral site in the country. Between the 16th and 18th centuries, Spain tried numerous times to build a permanent cathedral on the site but was unsuccessful until well after the Cathedral of San Fernando was completed in Texas.  By the time it was finished, more than two hundred years had passed since the first attempt was made, making it one of the longest church building projects in American history.  The Cathedral of St. Augustine was named a National Historic Landmark and added to the National Register of Historic Places in 1970.

The Cathedral Basilica of St. Augustine actually had another fire in 1887, and although the original shell survived, most of the cathedral as it exists today dates from restorations in the 19th and 20th centuries.  The current building was constructed with coquina stone, used due to its fire-proof nature.  It is also known for its external bell tower, unusual in Catholic church construction.  This was done so that its historic bells, including one believed to be the oldest in the United States, would be more visible.

The San Jose Church is the oldest church still standing anywhere on American soil, though this is a technicality as Puerto Rico is an American territory and not a state.  Parts of the original church can be dated back to 1532.  Ponce de Leon, of Fountain of Youth fame, was interred here for nearly three centuries.  In 1966, the San Jose Church was added to the San Juan National Historic Site.  It was designated a UNESCO World Heritage Site in 1983.

The San Jose Church is one of the oldest surviving churches in the Western Hemisphere. The church sanctuary is adorned with artwork, some of which was rediscovered during a recent renovation.  Ponce de Leon’s grandson is buried beneath the church, and the family’s coat-of-arms is still on display here.