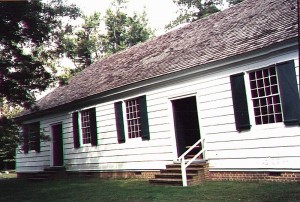 Tucked away among the many denominations that make up the tapestry of Christianity in America is a relatively small and unassuming group called the Religious Society of Friends. Better known as the Quakers, the Religious Society of Friends became known for their unusual religious meetings without leadership rather than traditional Protestant worship services with ministers or pastors as well as their odd practice of dancing and ‘quaking’ to express their joy to God.  The Quakers are a relatively small denomination now, but during the Colonial era were much more prominent and influential, counting such luminaries as Benjamin Franklin among its members.  Some of the oldest surviving religious structures (in this case, meeting houses) in America are the legacy of the Quakers in this period.

The Religious Society of Friends, more commonly known as the Quakers, began to establish communities in New England as early as the mid-17th century.  Not particularly welcome in the less tolerant Congregationalist-Puritan colonies of Massachusetts and New Hampshire, many Quakers settled in Rhode Island.  One of the largest Quaker communities became established in Newport in 1657.  They constructed the Great Friends Meeting House in 1699.

This meetinghouse was one of the largest in the colonies at the time, and only grew bigger with several expansions over the next two centuries. It was here that the Religious Society of Friends had their national meeting every year until 1905, when it was moved to Massachusetts.  The Quaker community of Newport has since dwindled, and its Meetinghouse turned over to the Newport Historic Society as part of that city’s National Historic District and is run as a museum.

Quakers from the Netherlands began settling on Long Island in the 1650s.  Because Long Island was part of the Dutch territory of New Netherland, the Quakers there were often hassled and fined by the colonial government, which was tied to the Dutch Reform Church.  However, persecutions died down by the 1660s, just in time for the British takeover of New Netherland.  Under the British colonial government, the Quakers generally fared much better, and the community was able to build its first meeting house in 1694.

This church has been in continual use by the Quakers ever since, save only a brief interlude when the meetinghouse was seized by the British Army during the American Revolution. The Old Quaker Meetinghouse in Flushing is the oldest Quaker meetinghouse still in use as well as the oldest religious structure still standing within the five boroughs of New York City.

In 1682, the first immigrants from Wales began arriving in the American colonies.  The earliest group included Quakers who were fleeing religious persecution in England, and these settled in what is now Merion, Pennsylvania.  There they established what may be the oldest meeting of the Religious Society of Friends outside of New England and New York.

The Quakers at Merion built the initial meetinghouse sometime around 1695, though the larger expanded meeting house was not completed until over a decade later.  It has hosted the Merion Friends Meeting ever since.  The Merion Friends Meetinghouse is the oldest place of worship in the state of Pennsylvania and the third oldest Quaker meeting house in the United States.

Small groups of immigrants belonging to the Religious Society of Friends began to arrive in what is now Talbot County in Maryland in the 1650s.  While a few very small meetinghouses were established at this time, larger waves of Quakers did not begin to arrive for another few decades.  In 1681, Johan Edmondson, a local merchant and devout Quaker, donated the land for a new meeting house which was the largest yet constructed south of Pennsylvania.  In 1684 the Third Haven Meetinghouse was completed and the first meeting was held here.

William Penn, founder of what would later become the state of Pennsylvania, was a prominent Quaker when he moved to the American colonies in the late 17th century.  Part of his reason for founding the new colony of Pennsylvania was to provide a place of refuge for Quakers fleeing persecution in Europe.  In 1701 her personally donated land in Philadelphia to the local Society of Friends group.

It would be another century before the Arch Street Friends Meeting House was completed in 1805, but due to its association with William Penn is sometimes mistakenly considered to be much older.  It is however one of the oldest surviving brick-built meeting houses in America, as well as the one of the largest Quaker houses of worship in the world.  The Arch Street Friends Meeting House is still in use.