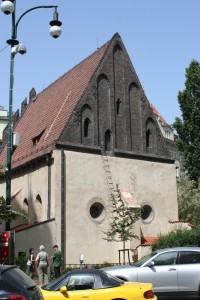 Judaism is one of the oldest religions in the world (among the major active religions it is only predated by Hinduism). Despite this, little if anything remains of Jewish religious sites prior to the Middle Ages.  Thousands of years of wars and persecutions have left little in the way of ancient synagogues.  The world’s last intact Roman-era synagogue was sadly destroyed when a massive fire swept through the Greek city of Thessaloniki in 1917.  Today the world’s oldest synagogues are to be found scattered mostly throughout Europe, but there are some archaeological gems scattered throughout the Middle East that are far older.

In ancient times, synagogues could be found in cities throughout the Roman and Persian empires, and sometimes beyond.  Most of these are now long gone, but not all.  The Delos Synagogue in Delos, Greece is part of a magnificent archaeological site.  The extremely minimal ruins of the synagogue, which is dated to approximately 150 BC, boasts artwork that depicts, among other things, several menorahs.  Some historians who have studied the site believe it may have been a Samaritan synagogue rather than Jewish, an extreme rarity indeed.

The Wadi Qelt Synagogue, located in the ruins of ancient Jericho north of the Dead Sea, is the oldest known synagogue site in modern-day Israel/Palestine.  Built sometime around 70 BC, it was part of a large palace complex used by the Maccabean kings.  Surviving portions of the synagogue include a courtyard, a ritual bath, and what may have been a genizah (a place where sacred documents were stored).

The Ben Ezra Synagogue may be one of the world’s greatest Jewish treasures.  The site of the synagogue was probably acquired around 882 AD from the Coptic church, though it may have been in Jewish hands at a much earlier time.  Whatever original synagogue stood there was demolished in 1012 AD, along with many other synagogues and churches, under the orders of the Fatimid caliph.  Ben Ezra was reconstructed just a few years later and was probably completed around 1040 AD (additions to this original building were added as late as the 19th century).

In the 19th century, a long forgotten room in the synagogue was discovered to be a genizah (a room for storage of documents).  Inside were hundreds of thousands of documents dating back as far as the 9th century.  This amazing collection is now kept at a number of universities around the world, including Cambridge in England.  The synagogue now functions as a museum.

The Erfurt Synagogue is one of Europe’s claimants for the continent’s oldest synagogue.  However, the actual completion date of the synagogue is unknown, and parts of the building date from later periods.  Although in use by the local Jewish community for nearly a thousand years, it has not always been used as a synagogue.

The synagogue is home to a museum, which contains, among other things, an amazing exhibit known as the Erfurt Treasure.  This treasure consisted of a trove of coins and valuables hidden away in a local Jewish residence, most likely around the time of the Black Plague.  The collection included over seven hundred pieces and is one of the largest such finds ever made.

The Ibn Shushan Synagogue is the oldest intact synagogue in Europe.  However, this spectacular Moorish era building was occupied in the early 15th century, when it was converted into a church.  Known as Santa Maria la Blanca, it has been in the possession of the Roman Catholic Church and others for the better part of six centuries.  During this period it was used, among other things, as a monastery.

It is possible that the synagogue-church was used as a place of worship by Conversos (Jews who were forced to convert to Christianity during the age of the Spanish Inquisition).  In later years, the synagogue was used as an armory for the production of bullfighting swords.  A formal request to the Catholic Church to return possession of the synagogue to the local Jewish community is currently outstanding.

The question of what is the world’s oldest synagogue is usually answered by this, the Old New Synagogue of Prague.  This is because, even though it only dates to 1270 AD, it is the oldest intact synagogue in the world still in use as a synagogue.  It achieved this title when the city’s previous record-holder, the Old Synagogue, was demolished to make way for the 19th century Spanish synagogue.

The synagogue is a medieval gothic masterpiece, designed almost like a fortress.  Two legends are closely associated with the building.  One is that some of its construction stones came from the Temple Mount in Jerusalem.  The second is that the fabled Golem of Prague, a legendary creature constructed to protect the Jews, is kept in the synagogue attic.  The synagogue was spared destruction during the Nazi era as a future ‘memorial to a fallen race’.