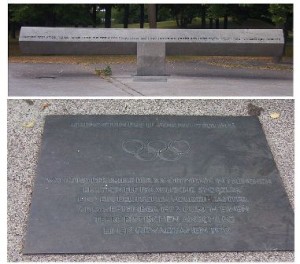 Twenty-seven years after the downfall of Adolf Hitler and the end of the Holocaust, the Jews of Israel made a symbolic return to Germany in the form of the Israeli Olympic team.  This act not only represented the courage and resilience of the Jewish spirit, it also represented the first tentative moments of reconciliation between the Jews and Germans.  Unfortunately, it was also a symbolic moment for anti-Zionist activists, who chose it as the perfect time and place to strike at Israeli nationalism.  On September 5, 1972, Palestinian terrorists broke into the apartments of the Israeli atheletes.  Five athletes, four coaches and two officials were killed.  This event, infinitely more tragic because of Germany’s history, has been commemorated by several memorials in Munich.

Israel’s Olympic history began in 1933 when an Israeli National Olympic Committee was formed in Palestine.  Ironically, this was the same year the Adolf Hitler came to power in Germany.  They had little to do until 1948 when Israel gained independence.  The first Israeli athletes participated in the 1952 Summer Olympics, and were an important and highly controversial addition to the games.  From the outset the Jewish atheletes drew criticism from anti-Semitic groups around the world.

The decision to participate in the 1972 Olympic games in Munich was a particularly poignant moment in Israel’s history.  West Germany was awarded the games by an Olympic committee eager to help the Germans reintigrate themselves into a skeptical world.  In an effort to distance itself from its terrible past, they presented to the world the ‘Happy Games’, going all out to put on the friendliest and most welcoming attitude possible.  Unfortunately, this open attitude also meant lax security.  On the night of September 4-5, terrorists of the Black September group struck.

The terrorists launched their operation at 4:30 am on September 5, breaking into the Israeli athlete’s apartments as they slept.  Not taken completely by surprise, some of the athletes, most of whom were wrestlers and weight lifters, fought back, allowing others time to escape.  But within a few minutes, two were dead and nine others hostages.  Most of the rest of the day was spent in a standoff between the terrorists, who desired the release of hundreds of Palestinian prisoners, and the German authorities, who were poorly trained in dealing with hostage situations.  Despite the offer of a large ransom from the German government and the efforts of an Egyptian mediator, the standoff continued.

Eventually, the German authorities came up with a plan to rescue the hostages.  Unfortunately, due to terrible execution, the operation was horribly botched.  In the end, all of the hostages were killed, along with five of the terrorists and one German police officer.  Over eighty thousand spectators and athletes attended a memorial service the next day.  Although many members of Black September were subsequently hunted down and killed by Israeli agents, it did little to assuage the grief of the international Jewish community.  Moreover, the terrorist act only strengthened Jewish patriotism in Israel and around the world.

There are two memorials in Munich that commemorate the tragic events of 1972.  The first is a stone marker embedded in the pavement of a path which once connected the stadium to the Olympic Village to the Munich Olympic Stadium.  It is a general remembrance of the terrorist attack.  Both the stadium and the house where the atheletes were housed are still standing.

A more personal memorial plaque can be found mounted on the fence in front of the house on Connallystrasse where the attack occurred.  The names of all of the victims are engraved on the plaque in German and Hebrew.

The Jewish Museum of Munich is a showcase of local Jewish history and culture.  The Dachau Concentration Camp, located just a few miles away from the Olympic site, was visited by the Israeli athletes a few days before the massacre.