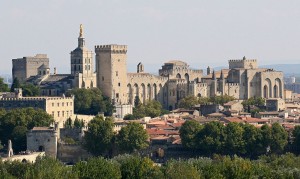 In 1309 AD, Pope Clement V moved the Papal residence from Rome in Italy to Avignon in France, initiating what many Catholics refer to as the Babylonian Captivity, a sixty-eight year period when the Bishop of Rome did not reside in Rome.  Although the Papacy was in Avignon for barely seven decades, its presence transformed the tiny town into a major metropolis.  When the Popes departed, they left behind a wealth of architectural treasures, from fortifications to secular public buildings to magnificent churches.  Their greatest legacy, however, was the Palais des Papes, or Palace of the Popes.  At the time of its construction, it was the largest Papal residence yet built, and one of the largest and most heavily fortified palaces in Europe.  It still stands in the heart of the city, a glorious reminder of Avignon’s brief stint as the spiritual heart of the Christian world.  The Palace of the Popes is part of the Historic Center of Avignon UNESCO World Heritage Site.

The 14th century was a period of tremendous change for the Roman Catholic Church.  Since the beginning of the Crusades, the religious authority, secular influence and material wealth of the Church had grown at a dizzying pace, especially in France and Italy.  This growth in the economic might and political dominance of the Church inevitably led to jealousies, infighting and power struggles among its leading members.  Rome itself had become a battleground, a warzone between feudal factions who sought control of the Papacy as the ultimate political prize.  The situation was further excacerbated by the increasing importance and influence of the clergy in France. They sought to detach Papal control from Italy altogether, a goal that was strongly supported by the powerful French monarchy.

The situation came to a head in 1304.  After the death of Pope Benedict XI, the Italian cardinals came under great pressure to elect a French Pope.  However, they did not wish to turn power over to the French cardinals.  As a compromise they elected Clement V, a French churchman who had formerly served as Archbishop of Bordeaux, but not as a cardinal.  However, the new Pope was anything but conciliatory.  Strongly attached to his French heritage, and the French monarchy, he was crowned in Lyon in 1305 and swiftly moved the Papacy to Poitiers in France.  Thus began the period known as the ‘Babylonian Captivity’ of the Papacy.

The reign of Clement V is one of the best known, and infamous, in history.  His biases towards the policies of the French monarchy were obvious almost from the start.  Among his first acts was the appointment of a number of new French cardinals to solidify their voting power in the selection of future popes.  Soon afterwards he gave the King of France, Philip IV, his blessing in the violent destruction of the Order of the Templars in France.  He also oversaw the brutal suppression of the revival of the Cathar Heresy.  Most famously, he gave the Papacy a new permanent home in Avignon beginning in 1309.  Clement was the first of a succession os Popes who became ever more closely entangled with the politics of the French court.

There were seven popes of the Avignon period, which lasted from 1309 to 1377.  During the reign of Benedict XII, the third Avignon pope, construction was begun on a palace-fortress of magnificent proportions.  The work took nearly thirty years and lasted through the end of the reign of the fifth pope, Innocent VI.  The construction of the Papal Palace of Avignon was the most expensive building project in Europe in the 14th century, virtually emptying the Church coffers and foreshadowing the even bigger building projects that would bankrupt the Vatican a century later.  In 1376, the seventh and last Avignon pope, Gregory XI, moved the Papacy back to Rome, and the palace in Avignon was occupied for twenty-five more years by the French anti-Popes during the Western Schism.  Four centuries later it was taken over by the state during the French Revolution, and has been a government property ever since.

The Palace of the Popes in Avignon is an immense structure which towers over the comparatively tiny houses and buildings in the center of the city.  At the time of its construction it was one of the largest complexes ever erected in Europe, and it is certainly one of the biggest structures of the Middle Ages to survive more-or-less intact to the present day.  From the outside it appears to be a massive fortress, but with odd cathedral-like features.  With wars raging all over the region, the daunting fortifications were a necessity of the era.  If the exterior size and proportions of the palace are impressive, its design and aesthetic appearance are less so.  Critics have noted the palace exterior is overly imposing and grim, even by Gothic standards.

The interior of the palace is a different story.  The giant complex contains within its walls the Papal residence and cloister garden, a grand chapel, and numerous other buildings.  After the departure of the Popes, the palace was badly neglected for centuries, and then was further mistreated during the French Revolution and Napoleanic periods.  Much of the current state of the interior is the result of contemporary restorations which have been ongoing for decades.  The artistic highlights of the palace are its numerous chapels, notably the St.Martin Chapel, which features paintings and frescoes by Matteo Giovanetti.  The palace now also houses a museum and a convention center.

The Palace of the Popes is located in the center of Avignon and is unquestionably the architectural focal point of the city.  The palace has long passed from the control of the papacy to the local municipal authorities.  It is open every day of the year at 9:00am (closing times vary widely depending on the time of year, but on most days is open until at least 6pm).  Admission is E10.50.  Web: www.palais-des-papes.com (official website)

The city of Avignon was little more than a small town when the Popes arrived.  During their relatively short residency, the Popes adorned Avignon with numerous other Christian edifices.  The oldest and largest is the Notre Dame des Dome Cathedral, the official seat of the diocese, not too far from the palace.  Another interesting Christian site is the Chapel of St. Benezet, located on what is left of the Pont d’Avignon Bridge.