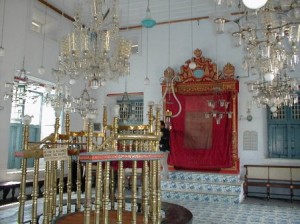 Of all of the places in the world that Jews settled in pre-Roman times, no location is so unlikely or improbable as distant India.  And yet, a Jewish community in India did exist as early as the 6th century BC, as surely as there were Jews in Mesopotamia, Persia, Central Asia, Yemen, Ethiopia and North Africa.  While the exact time and means of their arrival there are a matter of conjecture, there is no doubt that the Jews inhabiting the Cochin region of southern India are among the oldest continual Jewish populations in the world.  The community’s greatest legacy is the 16th century Paradesi Synagogue, the oldest east of Persia, and home to Asian Jewish artifacts of great antiquity.  The Paradesi Synagogue is the most visited Jewish site in India.

The history of the Jews in India may date as far back as the days of the Assyrian Captivity.  According to local tradition, descendants of the Lost Tribes of Ephraim and Manessah found their way to northeastern India following a migratory trek across Afghanistan and China that may have taken as long as a thousand years.  At first glance this may seem like just another unfounded Lost Tribes legend.  But the historical and cultural clues which back this claim are not without merit.  The Bnei Menashe, the Indian tribe that claims to be descended from Manessah, has many traditions clearly linked to ancient Israelite history, and have practiced a form of monotheism since before the arrival of Europeans in the area.  The claim that the Menashe are Jews has been officially recognized by Israel, who have extended to them the right of return.

The first verifiable wave of Jewish immigrants to India arrived in the 6th century BC.  These were the Cochin Jews.  According to their own history, they arrived at the port of Cranganore in southern India in 562 BC, approximately twenty-five years after the fall of Jerusalem.  These settlers obviously came by sea, though whether directly from Judah via the Red Sea or as refugees from Babylon via the Persian Gulf is uncertain.  A few hundred years later, another group of Jews, the Bene Israel, settled further north in the region of Maharastra.

The Cochin Jews spent the better part of two-thousand years living a quiet existence in the south of India.  Because of the area’s isolation from both Christian and Muslim dominant regions, as well as the community’s relatively good relations with its Hindu neighbors, India’s Jews were among the least persecuted in history.  Until the 16th century, there is no record of any deliberate acts of anti-Semitic violence perpetrated in Southern India.  Then the Muslims invaded from the north, and Christian merchant ships began arriving in the south, and all of the usual problems for the Jews followed in their wake.

Muslim persecutions of the Jews of Cranganore began in 1524, forcing them to move south to safety in Cochin.  The Paradesi Synagogue was constructed a few years after this influx.  However, the Portuguese arrived in Cochin soon afterward, established a settlement, and proceeded to oppress the Jews there until the Dutch arrived in 1660.  By that time the community had dwindled significantly.  A final wave of Jewish immigrants from Mesopotamia arrived along the west coast of India in the 18th century.  All of these enjoyed the protection of the government during the British occupation of India.  However, most of India’s Jews relocated to Israel in the second half of the 20th century.  The legacy of the few that remain is embodied in the community’s magnificent synagogue.

The current Paradesi Synagogue was built in 1568 to replace an earlier synagogue destroyed by the Portuguese.  Constructed on land donated by the Raja of Kochi and with funds donated by Dutch merchant interests, the Paradesi Synagogue stands adjacent to the Mattancherry Palace with which it shares a wall.  It is possibly the only synagogue in the world that is part of a royal compound.  A blend of Indian and Colonial architecture, the exterior of the synagogue is interesting if a bit drab from age.  The most striking exterior feature is the clock tower with four clocks which feature Hebrew, Arabic, Indian and Roman numerals.  An engraved stone from the original 14th century synagogue is part of the walls.

The interior of the synagogue is much more interesting than the exterior.  Its appointments include hand-painted floor tiles, brass fixtures and glass chandeliers.  A series of paintings depict Jewish life in Cochin.  The synagogue’s treasures include an ancient pair of copper plates and an oriental rug.  The former was a gift to the Jewish community in the 10th century by the local Raja.  The latter was a gift to the synagogue by Haile Selassie of Ethiopia.

The town of Ernakulam is a suburb of Kochi, about a hundred and twenty miles west of Madurai and approximately eight hundred miles south of Bombay.  The Paradesi Synagogue is open to the public every day except on holidays.  There is no coast of admission.  Web: www.keralatourism.org (official tourism website of Kerala)

There are few other related Jewish sites of interest in India.