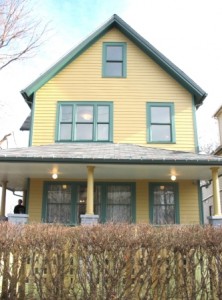 A small house in the Tremont area of Cleveland is the pilgrimage mecca for fans of all things related to the holiday movie classic, A Christmas Story.  This house, which was used for the exterior shots of the Parker home in the movie, was acquired by San Diego businessman Brian Jones in 2004.  He subsequently remodeled the interior into a near-perfect replica of the Parker house as it appeared in the film.  It is now open to the public as the Christmas Story House, one of the greatest movie homage attractions in America.  The house is open year round for Christmas Story maniacs to come and dream of Red Rider BB guns while ogling major awards.

When the movie A Christmas Story was first released in 1983, it was a box office flop.  It has since grown into one of the holiday season’s most popular movies, and it is considered by many to be the first great Christmas classic of the post-Golden Age of Hollywood.  The city of Cleveland was chosen for the filming of exterior shots because of the presence of the now closed Higbees Depatrment Store.  The nearby Tremont neighborhood and the house on West 11th Street caught the director’s eye, and the rest is history.  In December 2004, Brian Jones, founder of the Red Rider Leg Lamp Company and film enthusiast, purchased the house.  Two years later, the Christmas Story House was open for business. 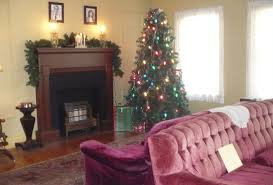 The Christmas Story House has been restored to nearly-pristine movie condition.  It appears, as best as possible, exactly as it did in the film, down to the last detail: Randy’s kitchen-cabinet hideout; the furnace damper switch; the bar of Life Boy soap in the bathroom; and of course, the famous leg-lamp gleaming in the front window.  In addition to the Parker residence, one of the neighboring houses is home to the Christmas Story Museum.  The museum displays a large collection of memorabilia from the movie, including many props and pictures from the set.  Of course, no visit to the house is complete without a visit to the gift shop, where fans can procure their very own Red Rider BB Gun with a compass in the stock and this thing which tells time.  And of course, leg lamps.  And pink bunny pajamas.

The Parker House and Christmas Story Museum are located in the Tremont District, about ten miles south of downtown Cleveland.  They are open Thursdays-Saturdays 10:00am-5:00pm and Sundays Noon-5:00pm (additional hours on Wednesdays from Thanksgiving through New Year 10:0am-5:00pm).  Admission is $7.50.  Web: www.achristmasstoryhouse.com (official website of the Parker House and Museum)