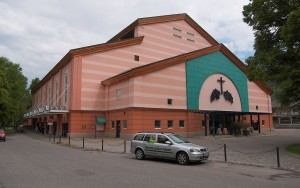 In the year 1634, the residents of the small town of Oberammergau in Germany made a collective pledge to God that if he would spare them from the plague which was then ravaging Central Europe, they would reciprocate by reenacting the Passion of Jesus Christ every ten years.  The town was largely spared, and the villagers’ vow has since been fulfilled as the world’s longest-running performance: the Passion Play of Oberammergau.  From its humble beginnings in the 17th century, this passion play has grown to epic proportions.  Because of its immense popularity, several performances are now enacted at the beginning of each decade.  It is by far one of the most popular spectacles in Europe, and a half a million people on average have come to see it during each of its runs during the 20th century.  The next show is scheduled for 2020.  Don’t be late.

The Bubonic Plague was the great scourge of Europe for the better part of the later Middle Ages.  From the 14th century until the 17th century, the disease had wiped out hundreds of millions of people.  During one of the larger outbreaks in Cental Europe in the early 1630s, the residents of the small town of Oberammergau prayed desperately to be spared the horror of the epidemic.  At one point, the people of Oberammergau became so fearful that they decided only a major act of penitence would save them.

Someone, it is not known exactly who, suggested that they make an oath to God, promising to perform a reenactment of the last hours of the life of Christ if they were spared.  So taken were the good folk of the village with the idea that they decided to go a step further and promise a performance every decade.  God apparently took them up on the offer.  As the plague swept through the region in 1633, only a few residents of Oberammergau perished.  The grateful townsfolk kept their word, and a year later the first performance of the Passion Play of Oberammergau was staged.

The first production of the Passion Play was probably relatively simple, with a small cast and a focus on the trial and crucifixion of Jesus of Nazareth.  By the 18th century it was moved from years ending in ‘4’ to years ending in ‘0’, a tradition which it has maintained more or less ever since.  In the subsequent four centuries since its inception, the play has grown to massive proportions, and now boasts a cast of thousands.  The original short performance of the Crucifiction has expanded to a mammoth seven-hour production featuring scenes from both the Old and New Testaments.

As popular as it has been, the Passion Play of Oberammergau has not been without its controversies.  In the late 18th century, the Catholic Church cracked down on the performance of Passion Plays across Europe, with the performance of 1770 being skipped.  One of the bigger issues with the Oberammergau production was its long history of Anti-Semitism.  From 1634 until 1960, the production of the Passion Play greatly exaggerated the role of the Jews, and did so to such an extent that even Adolf Hitler praised it.  Many of these elements were eliminated in the post-war period at the insistence of the Vatican.  The Passion Play of Oberammergau continues to be wildly successful with modern-day audiences, and approximately a half a million people come from all over the world to watch it every ten years.  The next performance is scheduled for 2010.

Although the Passion Play of Oberammergau occurs only once each decade, it seems as though the entire town is geared towards this great event most of the time.  This is especially true in the years immediately leading up to each performance.  According to some sources, the next production will feature over two-thousand actors and stagehands, all of whom must be residents of Oberammergau.  Subsequently, the sheer amount of time and money put into presenting the spectacle is beyond immense.

The results are typically nothing short of spectacular.  In 2000, the production ran seven hours with a short intermission for lunch.  It follows the final hours of the life of Christ, from his arrest to the Crucifixion, in great detail.  There are also scenes of the Old Testament, featuring snippets of the stories of Moses, Joseph and Esther.

The Passion Play of Obergammerau is staged in a giant open-air performance hall that stands on the site of the graves of those who local citizens who did die of the plague in the area, about fifty miles southwest of Munich.  Despite the fact that there are now multiple performances each decade, tickets are extremely hard to come by and expensive.  Ticket prices for the play range from E49.50 to E165.00, with most priced at around E137.50.  They should be booked as far ahead in advance as possible.  Web: www.passionplay-oberammergau.com (official website)

As far as Christian sites are concerned, Oberammergau is all about the Passion Play.  However, most visitors to Oberammergau pass through the Romantic Road region which is full of beautiful old churches.  The most famous perhaps is the Michaelskapelle, part of the convent located in Fraueninsel near the Chiemsee.  The chapel houses the Cross of Bischofhofen, an 8th century artifact.