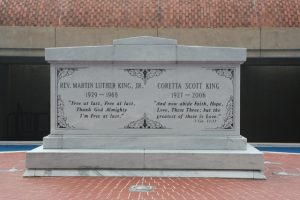 This week marks the 50th anniversary of the assassination of Dr. Martin Luther King, Jr.  Dr. King, one of the outstanding religious figures of American (and world) history, was a champion for both the Civil Rights movement as well as for downtrodden people everywhere.  During the relatively short tenure of his ministry, Martin Luther King turned the world upside down.  In doing so he proved to be one of the greatest paragons of the Christian faith of the 20th century.  This Wednesday, people around the world will gather to mourn once more his untimely death, celebrate his life and honor his achievements.  Here are some of the most meaningful churches and sites in the United States to commemorate his legacy.

There is perhaps no better place to begin than in the Sweet Auburn neighborhood of Atlanta.  This district, home to an historic African-American community, preserves many century-old buildings.  These include, among other things, the home where Martin Luther King Jr. grew up and Ebenezer Baptist Church where he served as a pastor later in life.

The Sweet Auburn Historic District is now part of the Martin Luther King Jr. National Historic Park.  In addition to the historic buildings, the park is home to a large visitor with an extensive museum on the life of King, as well as the King Center for Nonviolent Social Change.  The heart of both the district and the park is the tomb where Martin Luther King Jr. and his wife Coretta Scott King are laid to rest.

Boston, once the heart of the Abolitionist movement, was home to Martin Luther King Jr. when he pursued his doctoral studies at Boston University.  King received his PhD here in 1955 following his dissertation on A Comparison of God in the Thinking of Paul Tillich and Henry Wieman.  A memorial to King on the Boston University campus is currently being considered.

During his studies, Martin Luther King Jr. served as an assistant minister at Twelfth Baptist Church.  This historic congregation, founded in 1840, was very active in the anti-slavery movement that led up to the American Civil War.  Many of its earliest members were fugitive slaves, and many of its members and leaders in the 1950s and 1960s were active in the Civil Rights movement.

Montgomery was the city where Martin Luther King, Jr. spent most of the earlier years of his ministry.  It was also ground zero for some of the most dramatic and memorable events of the Civil Rights movement.  It was here in 1955 that Rosa Parks famously refused to give up her bus seat to a white passenger, launching the city’s famous bus boycott, which King was instrumental in organizing.

Martin Luther King Jr. served as the pastor of Dexter Avenue Baptist Church (now the King Memorial Baptist Church) from 1954 to 1960.  Next door is a large granite monument commemorating martyrs of the Civil Rights movement.  Montgomery is also the terminus of the Selma to Montgomery National Historic Trail, which retraces the route that protesters took when they marched on the state capital in 1965.

On April 3, 1968, Martin Luther King Jr. spoke at the Mason Temple in Memphis, Tennessee.  There he delivered his last and one of his greatest sermons, I’ve Been To The Mountaintop.  The Mason Temple, one of the most historic African churches in the United States, was the largest African denomination church in the United States at the time of King’s speck.  An historic marker commemorates his visit.

The next day, April 4, King was assassinated at the Lorraine Motel where he was staying.  Almost overnight the motel became a place of pilgrimage both the African American community and civil rights activists of all backgrounds.  The entire hotel is now home to the National Civil Rights Museum.

Martin Luther King Jr. spent much of his time in Washington, DC, promoting the Civil Rights agenda to presidents, legislators and many other leaders.  In August, 1963 he was part of the March on Washington, a massive demonstration on the National Mall advocating for freedom, jobs and civil rights.  On the 28th, he delivered one of the great speeches in American history (in fact considered by many to be one of the greatest speeches of all time): I Have A Dream.

As one of the defining American figures of the 20th century, it was perhaps inevitable that Martin Luther King Jr. would inevitably be honored in the nation’s capital with a monument.  However, it too more than four decades for work to begin.  The King Memorial was finally dedicated on August 28, 2011.