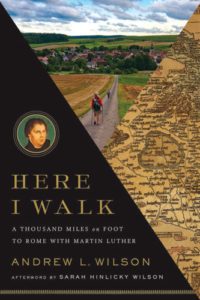 “Here I Walk” by Andrew Wilson

I just finished reading “Here I Walk: A Thousand Miles on Foot to Rome with Martin Luther” by Andrew Wilson (www.hereiwalk.org). This compelling travelogue recounts Wilson’s journey (along with his wife and occasional other fellow travelers) as he walks from Germany to Rome, recreating, to the best of his ability, the now famous 16th century pilgrimage of Martin Luther.

How I came by this book was almost completely an accident, but a worthwhile one. While attending the 500th anniversary of the publication of Luther’s 95 Theses in Wittenberg last year, I wound up staying in the same guest residence as Mr. Wilson.  To be specific, we were seated at the same common table at breakfast at the residence following the 8am service in English at the Castle Church.  We talked, I told him about my website, and he told me about his book.  A few weeks later I received a copy in the mail.

Delayed by the busy holidays, it took me about a month to get to reading it; but being drawn in it took me less than a week to get through its 200+ jam-packed pages. So first, a quick review.

“Here I Walk” (a twist on Martin Luther’s famous quote of defiance, “Here I stand”), is a welcome and as far as I am aware unique addition to the religious travelogue genre. The pages meander through six countries in ten chapters, alternating between historical anecdotes and the author’s personal experiences and tribulations, with the occasional bit of theology thrown in for good measure.

Overall it was both an interesting and insightful read, offering fascinating if vague glimpses into the life of Martin Luther. Because so little is known about Luther’s actual journey, Wilson’s writing evokes more of a general sense of what it was like to be monk traveling as a pilgrim in 16th century Europe.  As a history wonk, I really enjoyed how Wilson put the geography of the journey into historical perspective; personally I would have liked even more historical background than was offered.

If there was one thing I would critique (and to be fair this is me probably being overly nitpicky), is that the author spent more effort detailing the day-to-day hike than was probably necessary. There are definitely some places where the narrative bogs down a bit.  But then again, “Here I Walk” is a travelogue.

But the important question is, does “Here I Walk” inspire the reader to want to travel and experience European pilgrimage for themselves? The answer is an unequivocal ‘yes’.  With that in mind, here are some of the places that I am personally inspired to see on my next visit to Germany and Italy:

St. Augustine’s Monastery, the starting point of Andrew Wilson’s journey, was home to Martin Luther for about ten years during his time as a monk in the early 16th century.  Founded in the 1200s, only parts of the abbey are original as fires in the 19th century and air raids in the 20th century have taken their toll.  The abbey’s historic highlight, the cell where Martin Luther lived during his time here, is actually a reconstruction.  Despite this St. Augustine’s Monastery remains a popular place of pilgrimage for Protestants.

This cathedral, dedicated to the Fourteen Holy Helpers of the Roman Catholic Church, stands along a possible pilgrim route Luther took on his journey. Completed in the 18th century, it stands on the site of an earlier church built by Cistercian monks that was standing during Luther’s time.  It is dedicated to the Fourteen Holy Helpers (which include such luminaries as St. Barbara, St. Christopher and St. George) who were popular in Germany in the years after the Black Death.

This small church, located in the tiny picture-perfect village of Alvaschein amidst the picture-perfect forest covered Alps, was probably constructed at some time around the 13th century.  It stands on the site of an earlier church that may have been built as early as the 9th century.  The interior is decorated with spectacular frescoes and is home to a rare bone ossuary.

Milan is home to scores of historic churches, and can be easily overlooked, especially with hordes of tourists and pilgrims flocking to the Milan Duomo and the Church of Santa Maria delle Grazie (where DaVinci’s Last Supper is located).  However, this church, one of the world’s oldest and almost certainly visited by Luther, is an historic treasure.  Originally completed in the 4th century, it is the site of the tomb of St. Ambrose, who was a mentor for St. Augustine and a Doctor of the Church.

BASILICA OF ST. PETER IN THE GOLDEN SKY, Pavia, Italy

This magnificent 12th century structure is one of the most historic churches in Italy outside of Rome.  Although not completed until the Middle Ages, it is the site of the tomb of St. Augustine, among the greatest and most cherished Catholic theologians of all time.  Augustine had actually died and was buried in North Africa in the 5th century, but his corpse was recovered and moved to Italy after the area was annexed by the Islamic Caliphate. The church is named for the absolutely stunning golden artwork in the church’s apse.

Okay, this is not a religious site per se, but I find myself completely intrigued by the author’s descriptions of the walled city and its historic towers. Wilson himself suggests that the city is best seen from a distance, but I think I definitely have to add it to my bucket list.