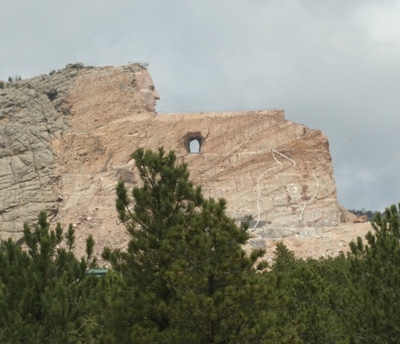 The period that lasted from the early 17th century to the early 20th century was one of nearly constant warfare between white settlers and Native Americans.  There were approximately one hundred named conflicts, or roughly one every three years.  These wars ranged in scale from small scale skirmishing that ended in days to massive uprisings that lasted for decades.  But they all had the same thing in common: it never ended well for the Native Americans.  While there were a handful of actual large-scale battles, most of the major engagements were in fact little more than massacres, and are now recognized as such.  Here are four parks where massacres should be remembered instead of battles being celebrated:

The Great Swamp Fight Monument commemorates the battle, or massacre, that took place in 1675 at a fort that once stood here.  The Great Swamp Fight was the largest and one of the most important engagements of the conflict known as King Philip’s War, an uprising of Native American tribes throughout New England against the ever growing number of English colonists.  The war raged for three years, and was the first and arguably the greatest effort ever made by Native Americans to dislodge European settlers from the continent.

The largest and decisive battle of the conflict was the Great Swamp Fight.  During this engagement, colonial militia assaulted the main Native American fort, which had been constructed in a swamp as a defensive measure.  However, during the winter, the swamp froze over, making it easy for the militia to attack over the ice.  The ensuing battle was fierce, with over two hundred militia killed or wounded.  However, Metacomet’s force of about a hundred warriors was killed, with perhaps as many as a thousand non-combatants killed or captured.

The Great Swamp Fight Monument consists of a rough-hewn obelisk and several stone markers which stand on what is believed to have been the site of the battle.  While it primarily commemorates the colonial victory and the militia who fought and died here, the marker also specifically acknowledges the valiant stand of the local tribes.  The monument is now regarded by many as a reminder of the massacre of the native peoples of New England and the beginning of a futile, two-century struggle by Native Americans to defend their lands.

The Battle of Horseshoe Bend was the decisive military engagement of the Creek War, which in turn was part of the greater conflict between the United States and Great Britain in the War of 1812.  It was also one of the most significant Native American attempts to halt settler expansion in the South.  While it was a victory over the British, it also represented another sad chapter for the Native Americans desperately fighting to hold on to their territory and culture.

During the War of 1812 many tribes living on the American frontier saw an opportunity to stop the inexorable march of American settlers into the west.  Early in 1814 future president Andrew Jackson led an army into Alabama to suppress the uprising.  The two armies met at Horseshoe Bend, where the Native Americans had entrenched themselves in a strong position on a hill.  However, they were significantly outnumbered, and despite all their efforts, the position was overrun by Jackson’s army.  The result was a massacre.  At the time it was hailed as a great victory for Jackson.  Today this is seen in a different light as part of the tragedy of the Native American people.

Horseshoe Bend National Military Park serves a dual purpose: to remember this battle, and to commemorate the nearly one thousand Creek Indians who died here trying to protect their territory.  Most of the battlefield site is preserved and there are markers noting where events of the engagement took place.  There are monuments and memorials on site commemorating both sides.

The Battle of Washita River, also known as the Washita Massacre, was an attack by federal troops led by George Custer on a Cheyenne encampment in the Oklahoma Territory.  Hailed at the time as an important American victory against aggressive tribes along the frontier, it is recognized in hindsight as being better described as a massacre that involved the killing of many innocent non-combatants.  The battlefield is now commemorated as such.

In 1868, after having received an order requiring Native Americans in Kansas and Colorado to relocate to Oklahoma, a number of tribes, notably the Cheyenne, began to organize and push back.  A large cavalry force was sent out to deal with the uprising.  Despite warnings from scouts the tribal leaders were caught unprepared when the United States army showed.  The result was a horrific defeat for the Cheyenne.  Though estimates differ, most of the warriors were killed, as well as an unknown number of women and children.

Washita Battlefield National Historic Site, like many of the other battle sites of the western frontier, is now more about educating visitors about the mistreatment of Native Americans than it is about the battle.  The site incorporates part of the encampment areas along the Washita River.  A lone teepee rather than a stone monument stands in front of the visitor center, commemorating what the battle was truly about.

The Battle of Sand Creek was a battle in name only.  There was no fighting to speak of, as there were few, if any, Native American warriors present at the time seven hundred federal soldiers attacked and wiped out an encampment of Cheyenne and Arapaho.  Although the Sand Creek Massacre was just one of many such incidents along the frontier in the 19th century, there is little doubt that this was among the greatest of the atrocities and one of the darkest stains on the record of the United States Army.

During the Civil War federal troops were dispatched to Colorado to secure the territory.  John Chivington, one of the Union commanders stationed in Colorado, had an undying hatred of Native Americans, and took advantage of his authority to persecute the local tribes.  Native Americans deemed friendly were offered the protection of the government, and part of the tribe of a local chief named Black Kettle accepted the offer.  Most of the tribe’s warriors did not and departed the encampment, leaving behind almost entirely non-combatants.  These flew both the American flag and a white flag demonstrating their non-hostility, but this did not avail them when Chivington’s men rode in and killed or mutilated almost everyone present.

The Sand Creek Massacre National Historic Site is one of the saddest in the National Park system.  It incorporates the site of the encampment and a large area beyond.  The monuments are minimal, and almost exclusively commemorate the victims of the massacre, though one stone monument on site still refers to the massacre as a battle.