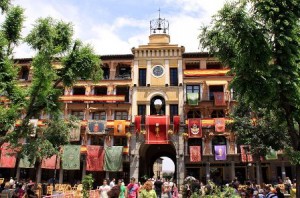 During the latter years of the 15th century, the Plaza de Zocodover in Toledo, Spain was ground zero for the most infamous, if not the worst, persecution of the Jewish people in European history prior to the Holocaust: the Autos de Fe of the Spanish Inquisition.  From 1485 to 1492, Toledo was the headquarters of Tomas de Torquemada, the Grand Inquisitor of Spain, and it was here that he personally presided over one of the darkest chapters in Spanish history.  Over the course of six years, hundreds of Jews and other ‘heretics’ were publicly burned at the stake in this square, and thousands more were tried and tortured in various places around the city.  Today, pleasant outdoor cafes and farmer’s markets conceal the infamous plaza’s chequered, bloody past.  The Historic Center of Toledo is a UNESCO World Heritage Site.

The institution known as the Inquisition did not exist until the 13th century, when it was created to address the Albigensian Heresy in France in 1233.  Originally designed to reconcile heretics with the Catholic Church in a reasonable and non-violent manner, within a decade it had degenerated into what ultimately became the greatest instrument of terror ever devised by a Christian institution.  In 1242, under the orders of the Inquisition, thousands of copies of the Talmud were destroyed throughout Western Europe.  In 1288, the first Jews were burned at the stake in France.

In its earliest days in Carcassone in France, the Papacy commissioned the Dominican order of monks to oversee and carry out the Inquisition’s activities.  The Dominicans remained in charge of the Inquisition for the better part of the next five centuries.  While the Inquisition was active in almost all Catholic lands, it was prevelant in those places where large Dominican abbeys could be found.  The main Inquisitions took place in France, Italy, Spain and Portugal.  Of all of these, it was in Spain in the 15th and 16th centuries where the Inquisition reached its greatest depths of infamy and depravity under the auspices of Tomas de Torquemada.

The persecution of Jews in Spain began long before the formal advent of the Inquisition.  As the Moorish cities of Spain fell one-by-one to the Christians during the Reconquista, the native population of Jews and Muslims faced ever-increasing persecution.  Under extreme pressure from the Spanish monarchy and the Catholic Church, tens of thousands of Jews were forced to convert to Christianity, the alternative being deportation, imprisonment or death.  These Christians came to be known as Conversos.  However, the vast majority of Conversos continued to practice Judaism in secret, and these Jewish Christians became known as Marranos.  Eventually the monarchy and the church learned of this secret practice, and by the late 15th century the problem of backsliding had become so pervasive that they decided to take drastic action.

In 1481, the Inquisition was formally established in Spain in order to deal with the heretical Marranos.  Torquemada, who was himself partly Jewish, took it over in 1483, and things quickly turned ugly.  The Inquisition’s early centers were at Seville and Ciudad Real where nearly a thousand Marranos were burned at the stake.  In 1485 the Inquisition’s headquarters was moved to Toledo, where twenty five Autos de Fe, or Acts of Faith, were held.  At these public events, every Converso was required to confirm their Christian faith or face burning at the stake.  Nearly five hundred were subjected to the latter.  The end of the first Spanish Inquisition came in 1492, when all Jews and suspected Marranos were simply evicted from the country, marking the end of the greatest Sephardic Jewish community of the Diaspora.

The Plaza de Zocodover is Toledo’s main square and a major tourism hub, replete with scenic buildings, outdoor cafes, street vendors and farmers’ markets.  The plaza is dominated by the walls of the Alcazar fortress directly to its south.  Over the centuries, Zocodover has seen its share of blood and violence, from the Autos de Fe to bullfights to several battles during the Spanish Civil War.  A few small memorials commemorate some of these events.

The Alcazar Fortress next to the Plaza is one of the oldest castles in Europe.  Parts of it date back to Roman times, and it has been strengthened and embellished by every conqueror since.  It was often used as a royal residence, both by Muslims and Christians.  During the Inquisition, many Jews and other heretics were imprisoned in the Alcazar fortress where they awaited their public trials, and where they were frequently subjected to torture.  The Alcazar is currently home to a military museum.

The Plaza de Zocodover is located close to the center of Toledo, approximately forty miles southwest of Madrid.  The plaza is an open site.  As of this writing, the Alcazar fortress and museum were currently closed to the public.  No further visitor information was available at this time.  Web: www.go-Toledo.com (unofficial tourism website of Toledo)