When most westerners think of major religious sites in Europe, they tend to think of pilgrimage powerhouses like Italy, France and Spain, and to a lesser extent Germany and England. While it is true that Eastern Europe was among the last places in the Old World where Christianity was introduced, there are still areas that have enjoyed nearly a millennium of religious tradition.  No place is this more true in Eastern Europe than in Poland, which is bursting with centuries of Catholic and Jewish history, and they have the pilgrimage sites to prove it: 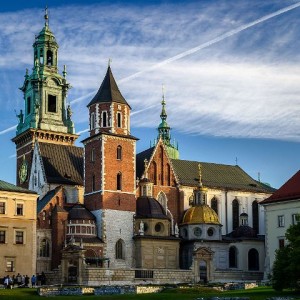 Wawel Cathedral is the great national Catholic shrine of Poland and one of the most important and historic Catholic churches in Northeastern Europe.  During the years of the Kingdom of Poland it was the country’s royal cathedral, with most of Poland’s kings coronated here and a large number buried here.  Its most famous burial is Stanislaus the Martyr, Poland’s first saint.  The cathedral also achieved fame in the 20th century as the home church of Karol Jozef Wojtyla, also known as Pope John Paul II, who gave his first mass here in 1946.

The cathedral is a beautiful building, despite its strange combination of styles.  The main building is a simple, white gothic structure dating from the 14th century. Two belltowers flank one end (one built of white brick half-way up and crowned with red brick; the other crowned with a towering, baroque belfry). The domes which crown the chapels along the side vary in size, shape, decoration and color (copper-green on some, gold-leaf on others). The interior is more harmonious.  The impressive white nave is flanked by chapels which house the remains of sixteen Polish kings.  The relic of Stanislaus is kept in a great silver sarcophagus beneath the church’s black marble altar. 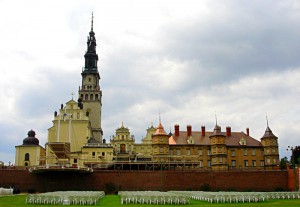 The Jasna Gora Monastery is the largest and most popular Catholic Marian shrine in Eastern Europe. For most of the last six centuries, it has been the most accessible major Catholic shrine in an area largely isolated from the rest of Catholic Europe by Protestant Northern Germany and Orthodox Russia and Ukraine. Because of this, a pilgrimage to see the monastery’s famous icon of the Black Madonna was an especially popular alternative during the Cold War. The arrival of the icon at Jasna Gora in the 14th century also makes it one of the oldest Marian shrines in the world.

The monastery here is one of the largest and most beautiful in Eastern Europe. Laid out on a hill behind daunting 17th century fortifications, the complex includes the original Chapel of Our Lady, a 15th century basilica and cloisters. The signature bell tower is the tallest in Poland. The Icon of the Black Madonna is kept in the Chapel of Our Lady. At least a thousand years old, it features the Virgin Mary in a black hooded robe holding the infant Jesus and clutching at a Bible. 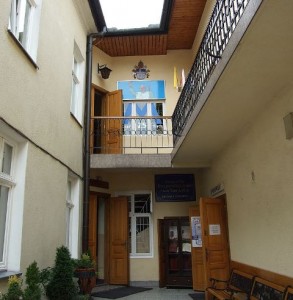 Pope John Paul II, born Karol Jozef Wojtyla, was the first Eastern European in history to achieve the highest office in the Roman Catholic Church. Arguably the best known and most beloved native of Poland in the modern era, John Paul II has also become that country’s enduring religious figure. Many places associated with his life, notably his birthplace, have become popular places of pilgrimage.

The family home of Karol Wojtyla in the city of Wadowice outside of Krakow is now maintained as an historic house museum. He was born here in 1920, and lived here until 1938. Much of the house and its furnishings have been preserved/restored to its condition in the 1930s. Also on site is an exhibit on the life and papacy of John Paul II. 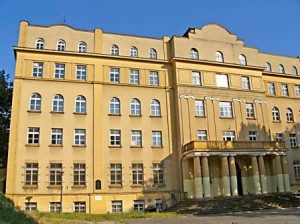 Lublin, once dubbed the Jewish Oxford, was the academic center of Ashenazi Judaism for the better part of four centuries. Jewish scholars came from all over Eastern Europe to study in Lublin at one of the continent’s only state-sanctioned Talmudic academies. The current building, completed in 1930 and gutted by the Nazis barely a decade later, is currently being renovated. In addition to the restoration of the school and synagogue, the yeshiva will be home to a Museum of Hasidism.

The earliest incarnation of the Yeshiva of Lublin existed as far back as the early 16th century, possibly earlier. However, the current building is less than a century old, Despite serious damage to the interior in the 1940s, this important symbol of Jewish academia miraculously survived World War II and the Holocaust. As of this writing, the repairs on the synagogue, which sticks as closely as possible to the original plans, have been completed. 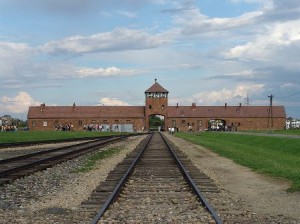 The Auschwitz-Birkenau Death Camp has the dubious distinction of being the blackest of all of concentration camps constructed by the Nazis in order to carry out their Final Solution. More than one and a half million innocent people, mostly Jews, were slaughtered here over a five year period. This bleak place resounds with the eternal voices of its victims screaming from beyond the grave, ‘Never Again’.

Most of the Auschwitz-Birkenau Camp is now one vast museum exhibit.  Numerous buildings have been restored to appear as they would have in 1944 at the height of the Holocaust.  The iron gate on the front still bears the mocking inscription of work and freedom.  The most soul-stirring sites are the restored gas chamber and crematorium.  Few other places in the world can inspire such deep emotion as staring at the terrifying ovens. There are also other exhibits, including rooms full of the former inmates’ personal effects, a film taken by the Soviets at the camp’s liberation and an exhibit on Jewish life in Oswiecim before the Holocaust and a resource center.