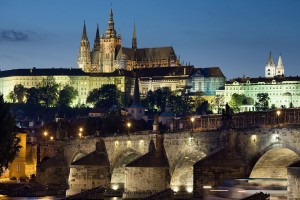 Like Wittenberg, Prague was a city of destiny for the Protestant movement. When the Catholic Church attempted to reassert its influence in Central Europe, it was in Prague that the Protestants made their first historic stand.  The Second Defenestration of Prague kicked off the Thirty Years War, the most violent inter-Christian conflict in history.  By the time the Thirty Years War had ended, the political influence of the Roman Catholic Church was all but destroyed in most of Northern Europe.  Prague’s multicultural heritage has left it with a wealth of important religious sites from across the Judeo-Christian spectrum, and it is now venerated by Protestants, Catholics and Jews alike.  Prague Castle is part of the Historic Center of Prague UNESCO World Heritage Site.

The history of Christian Prague began in the 10th century with the conversion of the Bohemian King Wenceslaus of Christmas Carol fame, though he was, in fact, a Duke.  At the time, Prague stood at the crossroads of Europe, between the Germanic north, Latin south and Slavic east.  The cultural mix of the city included many peoples, as well as one of Europe’s largest Jewish communities.  It is perhaps due to this cultural diversity that Prague has always been one of Christian Europe’s more progressive and forward-thinking cities, at least from a religious standpoint.  This progressive thinking first manifested itself in the 15th century, when the city was stirred by early rumblings of the Reformation.

In the early 1400s, local religious activist Jan Hus began to speak openly in Prague against several doctrines of the Church.  His following grew quickly in the relatively open-minded city.  Naturally, the Church deemed him too dangerous to live, and after arresting and trying him, Jan Hus was burned at the stake in 1415.  This led to the First Defenestration of Prague, wherein Jan Hus’ followers seized the Catholic leaders of the city and tossed them out of a window to their deaths.  The ensuing Hussite War, a precursor to the Thirty Years War, resulted in a surprising victory for the Hussites, an early Protestant sect, and Prague became the first city in Europe to nominally permit freedom of worship.

During the next two centuries, Prague and Bohemia witnessed an uneasy peace between the Catholic House of Hapsburg and the increasingly non-Catholic populace of the region.  However, as the Reformation took hold of Central Europe at the beginning of the 16th century, confrontation between the Catholics and Protestants of Bohemia became increasingly inevitable.  The dam burst on May 23, 1618 at Prague Castle, when a Protestant tribunal found several Catholic officials guilty of violating Protestant rights and tossed them out of a window of the castle into a pile of manure.  In historical terms, this was on par with the assassination of Archduke Ferdinand three centuries later.  This Second Defenestration of Prague sparked off the Thirty Years War, the greatest intra-Christian conflict since the sacking of Constantinople and the bloodiest war in European history to that point.

Prague spent much of the next thirty years annexed by foreign powers, including the vengeful Catholic Hapsburgs.  After the Peace of Westphalia was signed in 1648, Prague, battered and bruised, remained in Austrian hands, but quietly returned to its policies of religious tolerance.  Prague and Bohemia spent the next three and a half centuries controlled by a succession of foreign empires including the Austrians, the French, Nazi Germany and the Soviet Union.  However, even during the darkest of these periods, Prague has remained a beacon of religious and cultural freedom in Europe.  It now preserves many important monuments of Bohemia’s Catholic, Protestant and Jewish past, and is one of Central Europe’s most popular tourist cities.

The sprawling Prague Castle covers almost fifteen acres and is one of the largest intact medieval castles in the world.  It is actually more like a small city, with an architectural trove of palaces, churches and houses.  Originally constructed in the 9th century, it has been heavily damaged on several occasions.  Much of the current structure dates from the 16th century and this in turn was largely restored in the 18th century.  All told the walls contain five palaces, two cathedrals, the imperial stables, numerous other buildings and seven gardens.  The site of the famous manure pile which ignited the Thirty Years War is just outside the Vladislav Hall of the Old Royal Palace.

St. Vitus’ Cathedral, the royal cathedral of Prague, is a massive Gothic structure which took nearly six centuries to complete.  It was built in the traditional cross-style with a pair of massive bell-tower steeples over the entrance.  The interior of the Cathedral, where many of the Bohemian kings were coronated, is an artistic masterpiece as well as a vast mausoleum.  Most of Bohemia’s monarchs are buried here in the royal crypt.  The chief attraction is the St. Wenceslas Chapel, the earliest part of the Cathedral, built over the site of the saint’s tomb.  The Bohemian Crown Jewels are kept in a room next door.

Prague Castle crowns a large hilltop overlooking the Mala Strana district of western Prague.  It is easily reached on foot or by public transportation from the Old Town and city center.  The castle is open November through March from 6:00am-11:00pm, and April through October from 5:00am-midnight.  However, most of the attractions inside, including the palaces and the cathedral, are generally open from 9am-6pm.  The cost of admission to full access to the castle is CZK350.  Web: http://old.hrad.cz (official website)

Prague’s multicultural history has left it with a diverse collection of interesting religious sites.  In addition to the St. Vitus Cathedral, Prague Castle also houses the Basilica of St. George.  The city’s two great Christian martyrs are honored in Prague with statues: Wenceslaus in Wenceslaus Square and Jan Hus in the Old Town Square.  During the period of his excommunication, Jan Hus preached in Prague’s Bethlehem Chapel.  The Tyn Church is home to the tomb of one of science’s great heroes, Tycho Brahe.  The Brevnov Monastery is the oldest abbey in Bohemia.