For most Christians and Jews, as well as many Muslims, a visit to the Holy City of Jerusalem is the dream trip of a lifetime. Dreams of sacred places swim in the heads of millions of pilgrims who make their way to Israel every year.  They come from all corners of the Earth, seeking answers, seeking miracles, seeking validation of faith, or simply seeking to walk through ancient places where history has been made time and again.  Some find fulfillment here, some do not.

But for those who come to the Holy Land seeking a sense of deep spiritual serenity, be warned: The holy places of Israel, especially Jerusalem, are not for the faint of heart.  The crowds are everywhere, from dawn until dusk, with thousands of pilgrims and tourists jostling for a brief look at or contact with the places and relics of three ancient faiths.  Looking for a quiet moment of solitude by the Church of the Holy Sepulcher or the Western Wall?  How about a stroll along the Via Dolorosa without merchants yelling for your attention from every direction?  Well good luck with that.

But all is not lost. Just off the beaten the path, there are truly important and sacred places in and around Jerusalem which are virtually devoid of crowds.  Want a truly inspirational and contemplative place to seek spiritual enlightenment in the Holy City?  Try one of these: 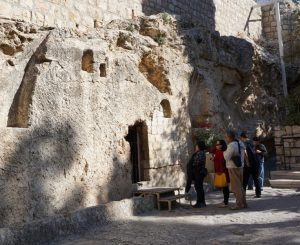 The Garden Tomb is a site just outside of the walls of the Old City, about a hundred yards north of the Damascus Gate.  This worthwhile destination is recognized (especially by Protestant Christians) as an alternative site of the Crucifixion of Jesus.  This is due to the immense skull-like rock formation near the site that has tentatively been identified as the Biblical site of Golgotha (which means the ‘Place of the Skull’).

Compared to the claustrophobic Church of the Holy Sepulcher, which is not only jammed with visitors and pilgrims throughout the day but is also a much less likely candidate for the site of the Crucifixion, the Garden Tomb is in a beautifully landscaped outdoor location, with many quiet niches and far fewer visitors.  As a bonus, the garden is home to an actual 1st century Jewish tomb carved into the hillside.  While the caretakers of the site make absolutely no claim that this is where Jesus was buried, it is an amazingly intact example of the type of tomb where Jesus was likely interred.

The Pool of Siloam 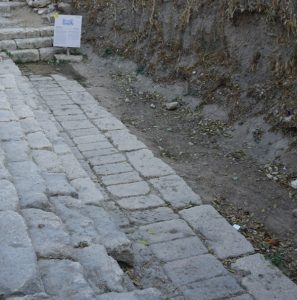 The Pool of Siloam is one of the oldest surviving structures of ancient Jerusalem.  Located in the City of David archaeological site just outside of the Old City wall near the Dung Gate, this cistern for the city’s water supply dates back to the First Temple period.  Its construction is attributed to King Hezekiah, who also constructed the famous tunnel that connected to the pool to the Gihon Spring.

Although the pool itself is not a particular important religious site, its waters were once used for sacred purposes at the Temple.  Today there are few places in Jerusalem which bear the weight of many ages like the Pool of Siloam.  Thanks to the fact that access to the pool requires effort, either by walking up and down hills or snaking through narrow tunnels, this amazing place is much less visited than it should be.  As an added bonus, for those with the fortitude, one way to get to the pool is through Hezekiah’s original tunnel, which is still filled knee-deep with water to the present day.

The Chapel of the Ascension 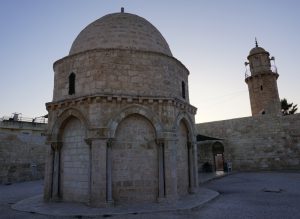 Chapel of the Ascension, Mount of Olives

The Chapel of the Ascension is (chronologically) the last place on Earth to be directly linked to the life of Jesus, at least by tradition.  Located close to the top of the Mount of Olives, about a 45 minute walk up a steep hill from Jerusalem’s Lions Gate, it is believed by both Christians and Muslims to be the site where Jesus ascended to Heaven.  Part of its construction is attributed to one of the greatest Muslim leaders in history, Saladin.

While most of the sacred sites on the Mount of Olives are an easy walk from the Lions Gate, the Chapel of the Ascension is not.  Most tours of the mountain do not go to the chapel, and in fact it does not even appear on many tourism maps of the city.  Because of this, what is arguably a top five Christian holy site is almost completely devoid of visitors.  For the price of a few shekels, pilgrims here can practically have this sacred site to themselves.  As an added bonus, a short walk from the chapel is an overlook with a magnificent view of the Old City from the east.

The Tomb of Samuel 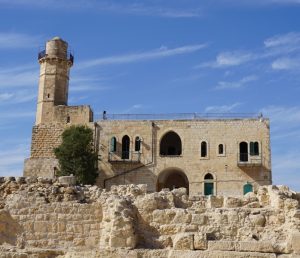 The Tomb of Samuel is one of Jerusalem’s best kept secrets.  Technically located in the Jerusalem suburb of Nabi Samwil, about ten miles from the Old City, this is one of the oldest recognized Biblical tombs.  Located beneath an old crusader church that has been converted into a synagogue, it is the centerpiece of an archaeological park that may be the ruins of the city of Mizpah, where Saul was chosen as king.

Thanks to the fact that Nabi Samwel is not easily accessible either on foot or by public transportation, and the fact that it is located in a heavily Orthodox suburb, very few pilgrims or tourists get here or even know about this shrine.  The few tours that come here are generally groups of Orthodox Jews.  The synagogue stands on the top of a hill which affords a magnificent view of almost the entire ancient territory of the tribe of Benjamin. 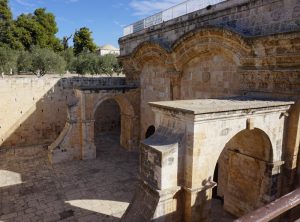 The Temple Mount was the site of the ancient Jewish temples Bible and is currently home to the third holiest mosque in Islam.  Founded by King Solomon, expanded by Herod the Great, destroyed and rebuilt many times until taking its current form under the Umayyads in the 7th and 8th centuries, the Temple Mount is among the most sacred places on the planet.  Its primary point of interest, the gleaming, golden-domed mosque known as the Dome of the Rock, is the Old City’s defining landmark.

Including this iconic location as a quiet, contemplative place may seem unlikely.  But the Temple Mount is huge.  Large numbers of pilgrims and tourists can be present without getting in each other’s way.  There are plenty of quiet corners to wander into, even for Jews and Christians who are not allowed to enter the two mosques here.  It is a good place to reflect how many Biblical figures once walked here, from Solomon to Jesus.  Of particular interest is the Golden Gate, which has been sealed off for centuries, where members of all three faiths can contemplate the final coming of the Messiah.