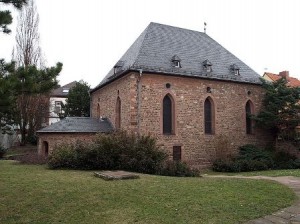 The cities of Mainz and Worms in Germany were the first major centers of Judaism in Central Europe, and together are considered to be the birthplace of Ashkenazi Jewry.  While Mainz was the older, larger and more important of these two Jewish communities, more of medieval Jewish Worms has survived the ravages of time.  Some of the oldest Jewish sites in Central Europe can be found in these two cities, including cemeteries of great antiquity.  The Rashi Shul Synagogue of Worms dates in part to the 11th century, though it had to be completely rebuilt after World War II.  In memory of the tragedy that wracked Germany during the Nazi era, both Mainz and Worms are extremely hospitable and respectful of pilgrims visiting these venerable Jewish sites.

The earliest known documented Jews in Germany arrived in the area of Cologne in the early 4th century AD.  These migrants from the Jewish communities of the Rhone Valley in France were probably early precursors of the Radhanite traders who came to initiate trade relations with the German tribes on the far side of the Rhine River.  Although Jewish merchants penetrated much of the Rhineland over the next six hundred years, little is known of the Jews in Germany during the dark age that followed the downfall of the Roman Empire in the west.

Jewish settlement in Germany probably began in earnest around the time of Charlemagne in the 9th century.  Jewish immigrants from Cologne in the north and Metz in the west began making their way down the Rhine River valley at that time, settling in the major trading centers of Mainz, Worms, Speyer and Frankfurt.  These cities formed the Jewish heartland of Germany in the Middle Ages.  It was in this region that Jews began speaking the German-Hebrew hybrid language that would later come to be known as Yiddish, and where Sephardism gave way to a new Ashkenazi identity.

The Golden Age of the German Jews lasted no more than a few centuries.  In earlier times, the Jews lived in relative peace when their German neighbors still followed their pagan deities, and even later when they converted to Arian Christianity.  This goodwill continued into the early days of the Holy Roman Empire, when, despite the increasing influence of the Church, the Jews were financially integral to the rule of the Carolingians.  But Jewish security and liberty along the Rhine came to a screeching halt at the outset of the Crusades.

In 1096 and 1097, Christian mobs in France and Germany, stirred up by the Church’s call for a crusade in the Holy Land, turned their religious fervor against their longtime Jewish neighbors.  Persecutions broke out all over western and central Europe.  One knight, Count Emicho, organized an army that marched down the Rhine Valley systematically assaulting and pillaging every Jewish community in his path.  Approximately twelve thousand Jews were slaughtered in the summer of 1096 alone.  By the time it was over, most of the Jewish communities along the Rhine were in ruins.  The survivors emigrated to the east, where a new center of Judaism grew up in Bohemia and Poland.

The Rashi Shul Synagogue dominated the ancient Jewish district in Worms for nearly a thousand years, before it finally met its fate at the hands of the Nazis.  Built in 1034 and rebuilt in 1175, it was the oldest synagogue in Europe until it was completely destroyed during the Kristallnacht in 1938.  Its loss was one of the great architectural tragedies of the period.  However, it was carefully reconstructed in the 1950s and 1960s, using as much of the original stonework as possible.  It now houses a small museum.

The Jewish Cemetery at Worms survived the Nazi period better than the synagogue.  With gravesites dating to the 11th century, it is the oldest Jewish cemetery in northern or central Europe still in existence.

The synagogue and cemetery are both located in the old Jewish district of Worms in western Germany, about forty miles southwest of Frankfurt.  The Rashi Shul Synagogue Museum is open Tuesdays through Sundays from 10:00am-5:00pm (closed for an hour at lunch time).  The cost of admission is Eu1.50.  The Jewish Cemetery is an open site.  Web: www.worms.de (official tourism website of Worms)

Other early Jewish sites can be found in the cities along the Rhine.  While there is little in Mainz that survived the Nazis, there is a small reconstituted Jewish Cemetery with gravestones which date back to the 12th century.  There are also memorials to several of the city’s lost synagogues, destroyed by Nazis and by Allied bombing during the war.  Also in Mainz are the stained glass windows in the Cathedral of Mainz which were designed by famed Jewish artist Marc Chagall.  The nearby city of Speyer also boasts some very ancient Jewish sites, including the ruins of the Speyer Synagogue, and a nearly intact Jewish Ritual Bath which still has running water, both of which date to the 12th century.