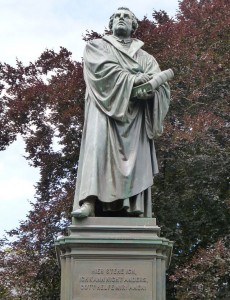 While Wittenberg was the place where Martin Luther inadvertently set the stage for the Reformation movement, Worms is where he formally threw down the gauntlet to the religious authorities of the day.  Two years after first professing his views in writing on the door of the Castle Church, Luther formally challenged the Papacy outright at the Diet of Worms.  His defiance and refusal to recognize the supreme authority of the Pope and the Church officially marked the beginning of Protestant Christianity.  It is because of this quiet but monumental event that Worms is now honored by Protestants around the world.  Unfortunately, the palace where the Diet of Worms actually took place is long gone.  However, Worms has made commemoration of the history-changing event a cottage industry, honoring Luther and the reformation with memorials, museums and the like.

The City of Worms was one of the first cities of the Rhineland to be exposed to Christianity.  Located in the heartlands of ancient Frankish territory, it became one of the most prominent cities of Charlemagne’s Empire in the 9th century.  The first Cathedral of Worms was designated a Kaiserdome, or Imperial Cathedral.  During the early days of the Holy Roman Empire, Worms grew prosperous, and was eventually declared a crown city directly under the authority of the emperor.  As such, Worms was eligible to host the periodic Diets (assemblies of the Reichtag), which it did on a half-dozen occasions between the 9th and 16th centuries.  Two of these meetings would have profound religious repercussions for the Church.

In 1122 AD the Concordant of Worms was issued in which the Church relinquished the right to select its own bishops and abbots within most of the imperial territories.  This ended the Investiture Controversy, which had threatened a major religious-political schism between the Pope and the Emperor.  The second and more famous meeting took place in 1521, and is often referred to as the Diet of Worms.  Here, from January to May, the great showdown between Martin Luther and the Roman Catholic Church took place.  After Luther’s issuance of the Ninety-Five Theses and Pope Leo Xs counter-issuance of the Exsurge Domine, Luther was summoned to the questionably neutral arena of the Diet of Worms to make his case.  There, under the auspices of the Holy Roman Emperor, Martin Luther defended and reaffirmed his beliefs.

His trial, which lasted for four months, was only one issue of business of the Diet, but it is without doubt the best remembered.  In the end, Luther refused to amend or recant his beliefs and accusations.  He left Worms while his accusers remained in secret deliberation.  On his way home he detoured to Eisenach where he remained in hiding at Warzburg Castle for the next three years.  In his absence the Diet of Worms found Martin Luther guilty of heresy.  The Edict of Worms, issued in May 1521, affirmed this decision, declaring Luther a criminal and ordered him retrieved dead or alive.  However, thanks to his benefactor Prince Frederick, Luther remained safely out of harms way.

The extreme terms of the Edict of Worms had the opposite effect of their original intent.  Instead of scaring people into returning to the Roman Catholic Church, the Diet of Worms seems to have actually accelerated the Protestant Reformation by lifting Martin Luther’s profile to that of a quasi-martyr.  Eventually the sentence on Luther was unofficially lifted by the Holy Roman Empire due to Luther’s growing popularity and other more pressing foreign affairs.  Despite the immediate loss of the debate, the Diet of Worms was an undeniable victory for the Protestant cause, a victory which would shake Europe to its foundations for the next three centuries.

Luther’s hearings largely took place in the Bishop’s Palace, but over the course of his four months of testimony he may have spoken or given testimony at other places around the city.  According to tradition, the city’s Trinity Church was built on the site of the Old Town Hall where Luther first spoke in Worms.  Whether or not this was a public speech or simply a related deposition is uncertain.  The early 18th century baroque church features a series of stained-glass windows showing scenes from Luther’s trial.

The Bishop’s Palace where the Diet took place is unfortunately long gone.  There is now a garden on the site of the hall where Luther’s deposition and subsequent debates took place.  A plaque marks the spot where it is believed that he stood when he officially rejected Papal authority.  Nearby is the Luther Monument, an enormous outdoor series of statues and commemorative markers depicting the history of the Reformation.

The various Luther and Reformation sites of the city are scattered throughout the Old Town of Worms, about two-hundred miles west of Munich and three hunred miles southwest of Berlin.  All of the monuments are open sites and are within walking distance of each other.  Web: www.germany.travel/…worms (official tourism website of Worms)

Worms has an ancient Christian history that dates back at least to the 7th century.  St. Peter’s Cathedral, one of Central Europe’s oldest churches, was built in the 10th century and contains elements that are even older.  The Magnus Church also dates back to early German Christian times and was appropriated for use by the Lutherans shortly after the Diet of Worms.  It is now one of the world’s oldest Protestant churches still in use.