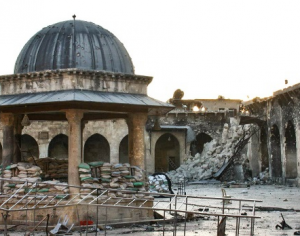 Ruins of the Minaret of the Great Mosque of Aleppo (Wikipedia.com)

As 2016 draws to a close, The Complete Pilgrim reflects on yet another year of tragic loss of religious sites around the world. The good news is that 2016 was not quite so destructive a year as 2015 was.  Undoubtedly that is small comfort to those who have lost a beloved place of worship, or the archaeologists and academics who treasure the history of such places.

Since this article was written in early December, it has sadly had to be updated twice.  In the most recent tragedy, a suicide bomber, allegedly tied to Islamic State, detonated a bomb just outside of the Saint Peter and Saint Paul Coptic Church in Cairo, killing several dozen.  While the historic church sustained serious damage, it appears at this time that the building can be renovated.  Other sacred places were not so lucky.

Wars in Syria and Iraq, ISIS activity, leave many religious sites in ruins

Once again, this year saw the destruction of more historic religious sites in Syria and Iraq than anywhere else in the world.  While the overall carnage seems to be down from 2015, Christian churches, Muslim mosques, Jewish synagogues and Pagan temples have all been among the collateral damage of both the ongoing civil war in Syria and the fanaticism of the Islamic State.

In Aleppo, ground zero for the civil war in Syria has largely been laid waste.  This includes its historic center, which is (or was) home to structures dating back to antiquity.  As rebels are slowly being forced out, the extent of damage to the old city is now becoming clear.  The Great Mosque of Aleppo, parts of which dated back to the 11th century, saw its minaret destroyed in 2013.  As of 2016, even more of the venerable building has been reduced to rubble.  A few blocks away, the Central Synagogue of Aleppo was damaged in the fighting back in February.  The good news is that, provided fighting soon moves out of the city, both buildings may be salvageable.

Sadly, that is probably not the case in neighboring Iraq, where the destruction wrought by ISIS has been more thorough.  As their enemies begin to retake territory, fighters of the Islamic State appear to be redoubling their efforts to destroy what they can.  After laying waste to the Temple of Bel in Palmyra in 2015, ISIS has continued its rampage among the area’s pagan sites.  Among the worst losses were the destruction of the Temple of Nabu in the city of Nimrod in June, and the Ziggurat of Nimrud outside of Mosul in November.  Damage among other sites, once ISIS falls, will undoubtedly be found to be extensive.

Other conflicts in the Middle East compound the destruction

Beyond Syria and ISIS, many other countries throughout the Middle East have witnessed the wanton destruction of religious places.  Conflicts between Muslims and those of other faiths, as well as with other Muslims, continue with depressing regularity.  This is especially true where the centuries old deadly rivalry between Sunnis and Shi’ites are concerned.  For example, in central Iraq, no sooner had the city of Falljuah been liberated from the forces of ISIS in June than several mosques were destroyed, ostensibly by Shi’ite militiamen.

The situation is particularly bad in Yemen, where a civil war, partly along Sunni-Shi’ite lines, has left the country devastated.  In August, Islamist partisans destroyed a 16th century Sufi shrine, the Mosque of Sheikh Abdulhadi al-Sudi in the city of Taiz.  Later in the month, an airstrike carried out by Saudi fighters on the city of Sana’a left the 9th century Mosque of the Prophet Shuaibi in ruins (the mosque was part of a UNESCO World Heritage Site).

Further east, strife between Muslims, Hindus and Buddhists in Southeast Asia has left a trail of destruction.  In June, a Buddhist mob ran amok in a village in Bago province, destroying a local mosque and other Muslim buildings.  In October, across the border in Bangladesh, a Muslim mob rampaged through the city of Brahmanbaria, destroying several Hindu temples (the regionally famous Kal Bhairab Temple appears to have been spared).

Unfortunately, some of the most tragic losses this year were, proverbially speaking, acts of God.  Everything from earthquakes in Australasia to wildfires in the America have left sacred sites in various states of disrepair.  Just last month, a fire ravaging Great Smoky Mountain National Park (idiotically set by some teenagers) spread to the popular resort town of Gatlinburg.  Several of the city’s churches were destroyed, including the regionally famous Cupid’s Chapel of Love, a very popular wedding destination.

On a more historical note, a series of moderate and strong earthquakes across Southeast Asia damaged large numbers of much older and more historic religious sites.  In August, a magnitude 6.8 quake struck the city of Bagan in Myanmar (Burma), doing extensive damage to the immense Bagan Temple Complex there.  In December, a 6.5 magnitude quake struck the city of Aceh on the island of Sumatra, the first place that Islam spread into Indonesia.  Over a dozen mosques were destroyed.  Among those damaged were the city’s spectacular Baiturrahman Grand Mosque.

On the other end of Asia, wildfires have been damaging both wilderness and urban areas of Israel.  Just last week a fire threatened parts of the coastal city of Haifa, largely destroying the synagogue of Congregation Kehilat Moriah, the only conservative Jewish congregation in the city.  Local Muslims have vowed to help in the synagogue’s reconstruction.

The growth of ultra right-wing and anti-foreigner sentiment across the western world has led to an increase in vandalism and arson, especially against mosques and synagogues.  Attacks have been reported from America to Europe to Australia.  Arson has claimed several mosques in the United States, including one in Florida and one in Texas (though the latter was inexplicably set by one of the mosque’s own worshippers).  Since the presidential election, there has been a spike in vandalism targeting synagogues, mosques and African-American churches.

One of the worst-hit modern cities, at least in terms of arson, was actually in Australia.  The city of Geelong in Victoria has seen the destruction of both Christian and Muslim places of worship, including the 19th century Geelong Presbyterian Church in April and the Geelong Mosque in May.  As of this writing it is unclear if there is a connection among these incidents, or if they are tied to hate groups.

Here are some of the other religious sites around the world that were lost or badly damaged in 2016: