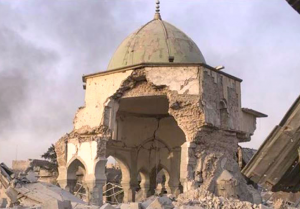 As we start a new year, The Complete Pilgrim commemorates some of the historic religious sites lost around the world in 2017. Like 2016, last year was not quite as tragic as the preceeding years, when it seems like a major religious site was destroyed on an almost monthly basis. For the first time in several years, the damage done by ISIS has been minimal. But other conflicts, mother nature and the simple ravages of time have all taken their toll. Here are some of the most notable losses from 2017:

ISIS is still flattening religious sites as they retreat

While ISIS has lost most of its territory, and the number of historic places it has destroyed was significantly reduced from previous years, they are still responsible for the biggest loss of 2017: the Great Mosque of Al-Nuri in Mosul. Completed in the 12th century, the Al-Nuri Mosque was actually the location where ISIS proclaimed its caliphate in 2014. Its destruction was out of pure spite as ISIS forces retreated from the city over the summer.

However, there was a tiny silver lining was found in ISIS’ path of destruction this year when ruins of an historic 7th century BC palace were discovered under another mosque destroyed by ISIS in 2014. While still mourning Mosul’s loss, it may be an opportunity for archaeologists and historians to make new discoveries about ancient Assyria.

Natural disasters lay waste to hundreds of churches in the Americas

Outside of politics, few news stories loomed as large as the catastrophic storms that swept across the Caribbean region in the autumn of last year. Hurricanes Harvey, Irma and Maria left a trail of immense destruction, with recovery efforts barely begun five months later. A major earthquake in Mexico in September added to the carnage.

Hundreds of houses of worship, by some counts thousands, were damaged or destroyed. Among these were some of Mexico City’s most iconic churches, including the Church of Our Lady of Angels, which, while still partially standing, saw its centuries-old dome crumble to ruins. The First United Methodist Church in Dickinson, Texas was destroyed by flooding from hurricane Harvey, giving it the unfortunate distinction of now having been destroyed by hurricanes twice (the first time in 1900).

Among other natural disasters: A major earthquake centered in Batangas in the Philippines badly damaged some of the oldest and largest churches in the Far East, including the Basilica of the Immaculate Conception and the Basilica of Saint Martin of Tours in Taal. And in a moment captured dramatically on video, a major flood completely destroyed and washed away an historic Buddhist Temple in Central Myanmar.

Fires, both by accident and by arson, take their toll on many religious sites every year. However, 2017 seems to have been a particularly bad year for fires, especially those set that were set deliberately. Among those places destroyed by arson (or suspected arson) are the Shangpa Karma Ling Institute Buddhist Center in Savoie, France; and the 19th century Beth Hamedrash Hagadol Synagogue on the Lower East Side of Manhattan. The latter, a New York City landmark, was recently deemed to be unsalvageable.

Mosques bore the brunt of fires around Europe, with prominent mosques destroyed in several countries. The most tragic of these was arguably the 15th century Ottoman Bayezid Mosque in Northern Greece. There has also been a rash of arson fires (and at least one explosion) at American mosques, largely tied to the rise of politically motivated anti-Muslim sentiment. The most prominent of these was the Victoria Islamic Center Mosque in Texas.

Not all fires were deliberate. 2017 also witnessed some very unfortunate accidental blazes. Arguably the most memorable of these was the centuries old Lingguan Pagoda at the Nine Dragons Monastery in Mianzhu City, China. The flames from the 16-story tower, the tallest in China, could be seen from miles around. In Tucson, Arizona, the Sun Chapel, with murals by famed artist Ted DeGrazia, was largely gutted, with much of the artwork damaged or destroyed.

As usual, sectarian violence and vandalism are once again among the most prominent culprits in the destruction of the world’s sacred places. Religions around the world shared in the tragic loss, both as victims and perpetrators.

Some of the worst violence took place across Southeast Asia, affecting churches, mosques and temples. In India, Muslim vandals damaged or destroyed numerous Hindu temples in the north of country in Kashmir. Across the border in Myanmar, Buddhist mobs destroyed a number of Muslim mosques, including two historic buildings in the city of Yangon. Even worse destruction was seen in the Philippines, where sectarian violence left St. Mary’s Cathedral in Marawi City and the Catholic Chapel of Malagkit almost completely in ruins.

Even with ISIS on the decline, violence and vandalism once again plagued religious sites across the Middle East. Many of the worst atrocities were perpetrated by Muslims against other Muslims. Houthi rebels have attacked and destroyed mosques across Yemen, while Sufi shrines were targeted in Syria. An American airstrike has been blamed for the destruction of a mosque outside of Aleppo in Syria, but this has been vigorously denied.

In Israel, the Beit Jimal Monastery, home to an historic church dedicated to St. Stephen, has been vandalized for the third time in four years. And for some reason, the Israeli government has provided funding to create an app which depicts the destruction of the Al-Aqsa Mosque in Jerusalem and what the Third Temple might look like in its place. Foreshadowing?

Ancient shrines torn down in the name of progress

Not all destruction is caused by accidents and vandals. There are some places which have simply been removed in order to make room for new development. Among these is Tel Es-Sakan in Gaza, where archaeologists are now scrambling to save ancient artifacts, including some that may be of Biblical interest.

In Belize, the two-thousand year old Noh Mul Pyramid is being torn down to make way for a new road. Adding insult to injury, the rubble from the pyramid is being used to pave the road. Urban sprawl in Lima, Peru has led to the construction of apartments at the Huantinamarca archeological site, which includes remains of sacred Incan religious buildings.

In Kashmir, the demolition of the Jammu Madrassa has raised tensions between Muslims and Hindus in Northern India. Dozens of temples in India’s southern province of Tamil Nadu, some more than a thousand years old, are being demolished in order to clear space for new buildings. In Cambodia, an ancient historic Buddhist Temple is being torn down in order to make way for a new Buddhist Temple.

And on a final note…

As if everything else wasn’t enough, treasure hunting at the world’s ancient religious sites appears to be on the rise. While not exactly vandalism, inexperienced treasure hunters damaged numerous religious sites last year, ranging from a monastery in Armenia to temples in India’s Nallamala Forest.