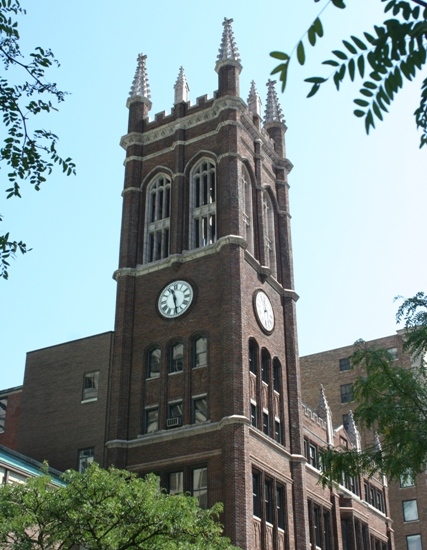 The city of Cincinnati, an important center of trade along the Ohio River even before the American Revolution, was a major draw for both settlers from the Eastern Seaboard and German immigrants throughout the 19th century.  These early settlers left their mark on the city in the form of some of the earliest major churches in the Midwest.  Cincinnati was also the site of the oldest Jewish congregation west of the Appalachians.  Over the course of decades Cincinnati was endowed with an exceptional collection of beautiful and historic religious buildings which are still enjoyed by citizens and visitors today.

Among the first major churches to be established in Cincinnati was the Episcopal Christ Church in 1817.  Among its founders was William Henry Harrison, future president of the United States.  It was later moved and redesignated as Christ Church Cathedral.  Rebuilt several times, the current cathedral largely dates from the 1950s.  The adjoining red brick parish house with its iconic clock tower dominates the city skyline.  Christ Church Cathedral comes alive during the holiday season when it hosts is famous Boar’s Head Festival, one of the largest traditional Christmas parties in the Midwest.

In the early 19th century, the first German immigrants to the area established a Catholic presence in Cincinnati almost as early as the Episcopal Church.  By the 1840s the community was large enough to merit a full-fledged archdiocese.  The Saint Peter in Chains Cathedral, among the first major cathedrals to be constructed in the Midwest, was completed in 1845.  A tremendous Greek Revival structure in striking white limestone, the cathedral became locally known for its interior decoration which includes mosaics of the Stations of the Cross.  The cathedral was famously visited in 1977 by the future Pope John Paul II.

Just across the street from St. Peter’s is the spectacular Isaac M. Wise Temple.  More popularly known as the Plum Street Temple, this historic congregation can trace its roots back to the arrival of German Jews in Cincinnati in the 1840s.  Arguably the most historic synagogue in America between the East Coast and San Francisco, it is also one of the oldest still in use.  Its Moorish architecture, with twin minaret-like towers over the entrance, contributes to the strange architectural mix of the neighborhood.  It is an integral part of the church district which surrounds Cincinnati’s city hall.

A number of other historic churches are clustered within a block of St. Peter’s.  Among these there are several of particular interest, including the Union Baptist Church.  While the current church was built in the 20th century, this historic African Baptist congregation was founded in the 1830s.  Also a block away from Plum Street is the stunningly beautiful First Presbyterian Church of Cincinnati.  This building overlooks Piatt Park with its promenades and presidential statues, the whole scene looking as if it had been lifted straight out of 19th century London.

On the north side of Cincinnati’s historic center is Washington Park, graced by several stately churches, including First Lutheran Church and Nast Trinity Methodist Church.  Among the city’s Roman Catholic architectural legacies are Old St. Mary’s Church and the St. Francis Xavier Church.  The latter institution was later responsible for the founding of Xavier University in 1831.  Also in Cincinnati is Hebrew Union College, founded by Rabbi Wise, and is the oldest Jewish seminary in the United States.