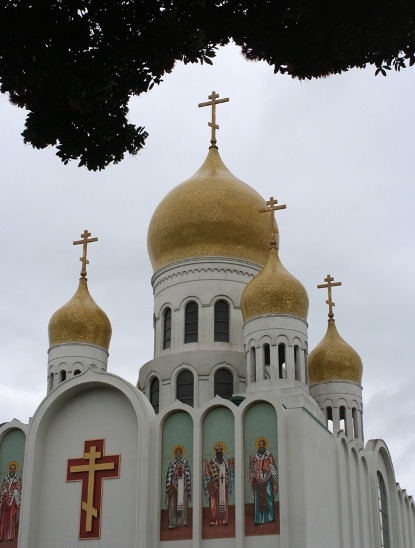 The city of San Francisco, one of the most historic American cities west of the Rocky Mountains, is home to some of the oldest, largest and most magnificent religious buildings on the Pacific Coast.  Site of one of the original Spanish missions from which Christianity spread throughout California, San Francisco was a convergence point for Spanish Catholics from the south, Russian Orthodox Christians from the north, and Protestants from the East.  This dynamic contributed significantly to the rich cultural, religious and architectural heritage that the city enjoys today.

San Francisco’s history literally begins at a church, the Mission San Francisco de Asis.  Also known as the Mission Dolores, it was the sixth mission to be founded in California, and is one of the oldest standing buildings in the state.  The surrounding neighborhood is called the Mission District in its honor.  One of the city’s most popular historic sites, the mission complex incorporates the original adobe chapel as well as a magnificent 20th century basilica.  The chapel interior is representative of the era and style, with a small but worthwhile collection of artwork and icons to see.

As the city expanded northwards, a larger, more centralized church was needed.  The Cathedral of St. Mary of the Assumption was established in the 1890s on what is now known as Cathedral Hill.  While the original church is long gone, the current cathedral, completed in 1971, has become a cornerstone of the city’s modern architecture.  Built of concrete, glass and steel, it’s strange dome/tower dominates the surrounding neighborhood.  Viewed from above it appears as a cross.  Due to its resemblance to a washing machine agitator, St. Mary’s has been nicknamed “Our Lady of Maytag”.

Just a few blocks northwest of the cathedral is the synagogue of Congregation Sherith Israel.  Many Jews began to immigrate to California during the 1850s, during which time two congregations emerged in San Francisco: Sherith Israel and Emanu-El.  These two groups, long friendly rivals, were the foundation of the first major Jewish community west of the Rockies.  The huge, domed Sherith Israel is the oldest purpose-built synagogue still standing in the city and is famous for its stunningly painted ceiling.

To the west in Presidio Heights is the synagogue of Congregation Emanu-El.  Architecturally similar to Sherith Israel, Emanu-El is larger and arguably even more impressive than its rival.  This synagogue complex, which incorporates several buildings and courtyards, is entered through massive gatehouses that evoke an almost Biblical feeling of awe.  It is also crowned with a stunning dome.

Further westward along Geary Boulevard is the towering Holy Virgin Cathedral.  An institution of the Russian Orthodox Church, it is one of only a handful of full-fledged cathedrals of that denomination outside of Russia.  The Orthodox Church was established in San Francisco in the 19th century by Russian traders coming down from Alaska.  The current building, constructed in the 1960s, is a neighborhood landmark, with icons of the saints painted on the façade and a quintet of gold-colored onion domes reaching up to the sky.  St. John of Shanghai and San Francisco, a locally revered Orthodox saint, is buried within the cathedral.

Back towards the city center is one of America’s most politically unusual religious institutions: Glide Memorial Methodist Church.  Famous for being a left-leaning church in a nation where churches predominantly lean right, Glide has hosted speakers ranging from Bill Clinton to Warren Buffet to Oprah Winfrey.  Even its architecture is unusual, from its odd Moorish-esque towers to the street level windows with awnings resembling those of an urban department store.

San Francisco is home to many other wonderful religious institutions besides these pilgrimage mainstays.  Just outside of the city are several more of the historic missions, including the nearby Mission San Jose.  The famous Fisherman’s Wharf is home to the Fisherman’s Memorial Chapel, where blessings are invoked every October for the city’s maritime fleet.  Congregation B’nai Israel, the only Karaite Synagogue in the United States, is just south of San Francisco in Daly City.