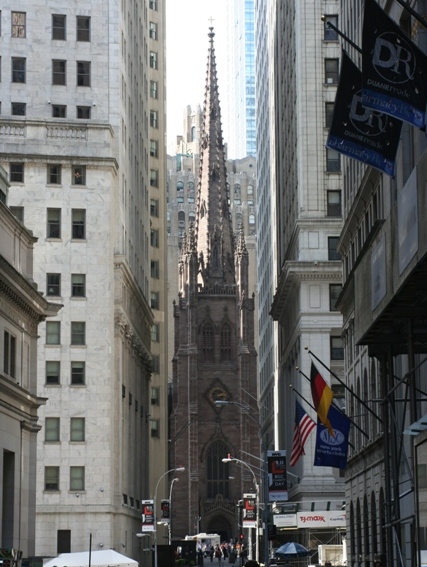 When it comes to historic religious sites, few places in the United States can rival New York City.  Packed into the city’s five boroughs is one of the largest and most diverse collection of churches, synagogues, temples and other religious sites to be found just about anywhere in the Western Hemisphere.  And no place showcases these architectural masterpieces like Manhattan.  From its small neighborhood churches to the titanic megaliths of Midtown and the Upper West Side, New York has everything.  But for the truly historic sites, there’s no place like downtown.

The oldest churches in New York City date from the British colonial era, as none of the earlier Dutch churches have survived.  St. Paul’s Chapel (209 Broadway), an Episcopal building completed in 1764, is the oldest church still standing in the city.  It was here in 1789 that George Washington worshipped on the day of his inauguration, and it was here in 2001 that rescue workers gathered in the aftermath of the World Trade Center bombings.  St. Paul’s is an extremely popular stop for those paying their respects at nearby Ground Zero.  Inside the church is an exhibit of police and firefighter badges from around the world, sent to commemorate the lives of rescue workers lost on September 11.

A block north of St. Paul’s is St. Peter’s Church (22 Barclay Street), the oldest Roman Catholic parish church in New York.  In 1805, in one of St. Peter’s most memorable early moments, Elizabeth Ann Seton, the first native-born American canonized as a saint, converted to Catholicism here.  Like neighboring St. Paul’s Chapel, St. Peter’s was an important staging ground for rescue workers in the aftermath of September 11, 2001.  St. Peter’s currently hosts the Catholic Memorial at Ground Zero, which features an exhibit of religious themed artwork.

At the extreme southern tip of Manhattan, facing the water front, is one of America’s most important Catholic shrines: Our Lady of the Rosary Parish Church (7 State Street).  This church stands on the site of the former home of Elizabeth Ann Seton, and serves as one of two official shrines to her (the other being located in Emmitsburg, Maryland).

About half way between the Seton Shrine and the churches of St. Peter and St. Paul is New York City’s famous Wall Street district, home to three more historic churches.  By far the best know of these is Trinity Church (75 Broadway).  Trinity is another Episcopal institution which for many years had the distinction of being the tallest building in the city.  The home church of several prominent colonial-era figures, Trinity achieved Hollywood fame as the site of the climactic scenes in the hit film National Treasure.  Known for its iconic bell tower and steeple, which can be glimpsed down narrow Wall Street, the church also houses a small museum.  Alexander Hamilton, the first secretary of the treasury, is buried in the churchyard.

A few blocks east of Trinity Church is the John Street Methodist Church (44 John Street), home to one of the oldest Methodist congregations in the United States.  A much more modest affair than its more famous neighbors along Broadway, it nevertheless enjoys an excellent museum which features exhibits on the history of the Methodist church in America.  Among its artifacts is a clock gifted to the church by the father of Methodism, John Wesley.  Our Lady of Victory Church (60 William Street) is another Wall Street area church built towards the end of World War II and dedicated to the coming triumph of the Allies over the Axis powers.

Between the historic district and Houston Street, Old New York, especially that part which constitutes the city’s famous Lower East Side, are nearly two dozen more churches, cathedrals and synagogues.  These are largely the legacy of the many immigrant groups, especially Catholics and Jews, who settled in the neighborhood between the early 19th and early 20th centuries.

St. James Roman Catholic Church (James Street) is the city’s second oldest Catholic Church.  Unfortunately, it is both run down and was damaged in a fire in 2011, and may be taken down in the near future.  The Most Precious Blood Church (109 Mulberry Street), made famous by the Godfather movies, is home to the city’s famous Feast of San Gennaro.  St. Patrick’s Old Cathedral (263 Mulberry Street) is the original seat of the Archdiocese of New York, and one of the oldest surviving Catholic cathedrals in the United States.

Some of the most historic synagogues in America are clustered on the Lower East Side, including Congregation Chasam Sopher (10 Clinton Street) and the Anshe Chesed Synagogue (172 Norfolk Street) which are the two oldest synagogues in New York.  The former is still home to an active congregation, while the latter is now home to the Angel Orensanz Center, which is now used as an art gallery.  Also of great interest is the First Shearith Israel Cemetery (55 St. James Place) which was opened in 1682 and is the oldest surviving site of any sort in New York City.