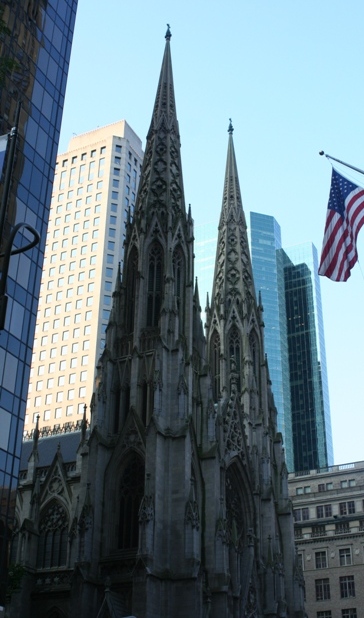 New York City has what is arguably the greatest collection of must-see churches and religious sites in the United States.  And ground zero for church hopping here is the island of Manhattan.  Many of the most historic churches, such as Trinity Church, are packed into the downtown area, which we looked at in Part One.  However, for New York’s most famous and visited churches, the best place to go is Midtown.  From the ‘Easter Parade’ churches that line Fifth Avenue to the massive and stately houses of worship that dot the Upper East Side, here are a dozen places where some of the most influential people in the world go to church:

The tour begins at Marble Collegiate Church (1 West 29th Street).  While located along Fifth Avenue, it is kind of a southerly outlier to the Midtown churches.  Built in 1851, it is a descendent of the original Dutch Reform churches that were established in Lower Manhattan in the 17th century.  For many years Marble Collegiate was the home church of famous radio minister Norman Vincent Peale.  The church clock tower has been a landmark of the neighborhood since the 19th century.

A block west and then twenty-two blocks north along Broadway is the Times Square Church (237 West 51st Street).  This Non-Denominational church in the heart of the Theater District is housed in the former Mark Hellinger Theater.  Built in 1930, classic Broadway shows once played here.  Doubling back three blocks south and two east to Fifth Avenue is the Church of Sweden (5 East 48th Street).  Built in 1921 to serve Swedish sailors, it nominally marks the southern end of the “Easter Parade” segment of Fifth Avenue.

Three blocks north along Fifth Avenue is New York City’s most famous church, St. Patrick’s Cathedral (611 Fifth Avenue).  Built in 1878, this absolute behemoth, seat of the Roman Catholic Archdiocese of New York, is one of the largest churches in the United States.  Thanks to its location directly across the street from Rockefeller Center, it receives five million curious visitors annually.  The cathedral also hosts the city’s annual St. Patrick’s Day Parade, a massive event that takes over Fifth Avenue every March 17th.

Another three blocks north is St. Thomas Church (1 West 53rd Street).  Although not the seat of the diocese, it is the major Episcopal church of Midtown Manhattan.  Completed in 1914, it is one of the largest Protestant Gothic buildings in the city, and is famous for its choir.  Yet another two blocks further north is Fifth Avenue Presbyterian Church (7 West 55th Street).  Built in 1875, it is one of the largest traditional Presbyterian churches in the United States.  It nominally marks the northern end of the “Easter Parade” segment of Fifth Avenue.

Three long blocks due east along 55th Street is Central Synagogue (652 Lexington Avenue).  Although not as famous some of Manhattan’s other major synagogues, this Moorish Revival masterpiece completed in 1872 is the oldest and arguably the most stunning.  It is architecturally famous for the immense towers crowned with Faberge-like domes that flank the main entrance.

Next the journey continues out of Midtown and into the Upper East Side.  Five blocks north and one block west along 60th street is Christ Church NYC (524 Park Avenue), one of the city’s major United Methodist churches.  Largely completed in 1933, work continued until after World War II due to funding issues.  The stunningly ornate Romanesque-Byzantine building is highly unusual for a mainstream Protestant church, and much more resembles a Greek Orthodox house of worship.

Two blocks west back to Fifth Avenue and five blocks north is Temple Emanu-El (1 East 65th Street).  This Romanesque masterpiece, completed in 1929, is absolutely enormous.  It is the largest synagogue in the United States, and up until a few decades ago the largest in the world.  There is a small museum on site, housing a collection of Judaica that dates back several centuries.

The next stage is the final stretch along Fifth Avenue.  Six blocks north and one block east goes to the St. James Church (865 Madison Avenue).  Built in 1810, this Episcopal church served the Manhattan suburbs before the city stretched this far north.  Five more blocks north and two more east leads to the St. Jean Baptiste Church (184 E. 76th Street).  This sizeable church was completed in 1912 and serves the Roman Catholic parish of the Upper East Side.  It is notable for its dome, one of only a handful in the New York cityscape.

Last but not least, a short walk two blocks south and three blocks east ends at the Holy Trinity Cathedral (337 East 74th Street).  This is actually one of the most important churches in the city, as it serves as the seat of the Greek Orthodox Church in the United States.  Located in the middle of a side street, it appears smaller than it actually is.  But it is a large building, and features some of the finest iconic artwork to be found in New York City.