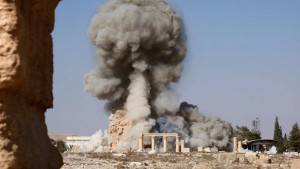 Destruction of the Temple of Baalshamin (wikipedia.com)

The world is full of magnificent and historic religious sites. New ones are built every year; sadly, many old ones are destroyed every year, falling prey to the ravages of time, nature and unfortunately the destructive impulses of man.  Probably the most prominent religious site in the news this year was the Masjid al-Haram, the great mosque in Mecca and holiest place in the Islam, which was badly damaged by a falling construction crane which killed over one hundred people.  Despite the sad loss of life, the mosque itself survived and is already on the way to being fully repaired.  Many other places have not been so lucky.

Forces of the Islamic State in Iraq and Syria (ISIS) continued their rampage across Mesopotamia in 2015, laying waste to ancient pagan temples, Christian churches, and even Sunni and Shi’ite mosques.  Dozens of religious sites have been destroyed regardless of faith or denomination, making ISIS the most feared and detested of the world’s defiler of sacred places.  Among their victim sites in 2015:

The Temple of Baalshamin in Palmyra, part of which dated back to the 2nd century BC; the 19th century Ottoman-era Maryam Khatoon Mosque in Mosul; an 1800 year-old Assyrian church in Mosul; and the Saint Elian Monastery in Qaryatain, which may have dated as far back as the 5th century.

Across the Sahara and Sahel regions of Africa, friction between Christians and Muslims has underpinned more than half a dozen major conflicts.  Some of the worst destruction came at the hands of Christian partisans in the Central African Republic, who systematically destroying almost every single mosque in the country.  At last count, this included an estimated 417 of the 436 mosques in the country.

Muslim Militants destroy hundreds of churches in Nigeria and Niger

Not to be outdone, Muslim militant groups operating in the Sahara region, notably Boka Haram working in northern Nigeria, have been eradicating churches located in the Muslim territories at breakneck pace.  So far, the worst damage seems to have taken place in the nations of Nigeria and Niger, where a significant but unknown number of churches have been destroyed.

Senseless destruction of religious sites is not just a Middle Eastern problem.  In the United States, White Supremacist groups have been targeting churches with black congregations with increasing frequency in 2015.  Attacks have taken place at dozens of African churches over the last year, with arson being the culprit in most cases.  A number of these attacks have led to total destruction of the buildings.

Here are some of the other religious sites around the world that were lost or badly damaged in 2015: