Manhattan, the heart of New York City, is one of the most popular travel destinations in the world, receiving well over fifty million visitors annually.  Tourists in New York swarm to its countless amazing sites and attractions, including dozens of America’s best known churches. 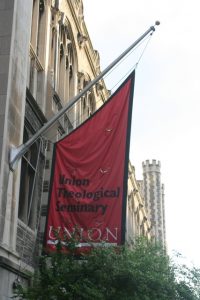 From historic Trinity Church and St. Paul’s Chapel in Lower Manhattan to the immense edifices of Riverside Church and the Cathedral of St. John the Divine in Morningside Heights, few serious sightseers escape the city without popping in to at least one breathtaking church. If all else fails, many tourists will at least take a break from window shopping on Fifth Avenue to peek inside St. Patrick’s Cathedral, possibly America’s most visited church.

But beyond New York’s breathtaking churches is a treasure trove of seminaries, libraries and museums that together boast some of the greatest collections of religious writings and artifacts in the world.  Sadly, one of the finest, the Museum of Biblical Art at the American Bible Society, recently closed its doors.  But it is survived by many other institutions, most of which lack the maddening crowds that plague New York City’s better known destinations.

Manhattan is home to over a dozen religious seminaries, including five clustered around Columbia University north of Central Park where few tourists venture.  First and foremost among these is Union Theological Seminary, a Presbyterian-founded institution affiliated with Columbia.  Among the oldest seminaries in the United States, it is home to the Burke Library, one of the largest seminary libraries in the world.  It contains everything from medieval manuscripts to modern day prayer books and hymnals.  Of particular interest is its collection of early imprint books on the Protestant Reformation and Martin Luther.

A short walk from Union is the Jewish Theological Seminary of America, also affiliated with Columbia University.  In 1966, the library of the JTS was badly damaged in a fire that destroyed an estimated seventy thousand writings.  Fortunately, the library’s special collection was stored elsewhere and was spared.  Among its works are thousands of booklets, scrolls and fragments of the Cairo Genizah collection.  This collection, discovered in Egypt in the 19th century, held a treasure trove of Jewish documents dating as far back as the 9th century. 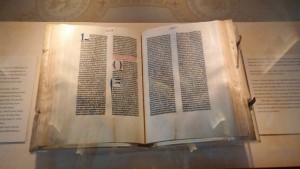 More on the beaten tourist path, Midtown Manhattan is home to a pair of libraries overflowing with rare religious books.  The first, not surprisingly, is the massive New York Public Library.  The second largest library in the United States (after the Library of Congress), boasts everything from a breathtaking collection of medieval illuminated manuscripts to important religious pieces of the modern day.  Highlights include a beautifully illustrated 17th century scroll containing the Book of Esther, a first edition copy of the Hamisha Humshe Torah, the first printed Hebrew Torah and, best of all, a Gutenberg Bible.

Amazingly, there is an even better religious collection just a few blocks away at the Morgan Library & Museum.  The personal collection of J.P. Morgan, it contains not one but three Gutenberg Bibles, one of which is complete (the only complete copy in New York).  However, perhaps of more historical importance is the Codex Glazier, a Greek manuscript dated to the 4th century that contains roughly the first half of the Book of Acts. 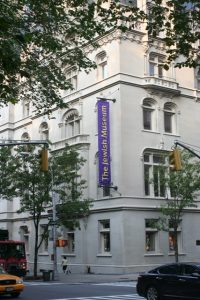 New York City is famous for its numerous museums of Jewish interest.  First and foremost among these is the Jewish Museum.  Located along Manhattan’s famous Museum Mile, it is one of the oldest and largest such museums in the world, with one of the largest collections of Jewish artifacts and art to be found anywhere.  It includes pieces that range from as far back as Israel’s kingdoms period in the 8th century BC to the paintings of Marc Chagall in the 20th century.

Towards the southern end of Manhattan is the Yeshiva University Museum, a smaller institution but with some really worthwhile items in its collection.  Among these is a Torah scroll that is believed to have once been owned by Baal Shem Tov, founder of Hasidic Judaism in the 18th century,  Also here is a letter from Thomas Jefferson dated 1818 that reaffirmed the idea of religious liberty in America.

These are just some of the best must-see places of religious interest in New York City, though there are many more: from many more fascinating Jewish museums in Brooklyn to the Cloisters in Northern Manhattan (a collection of European monasteries relocated to New York and now used as a medieval art museum).  There are even great religious exhibits to be found in the more mainstream museums from the Metropolitan Museum of Art to the American Museum of Natural History and beyond.