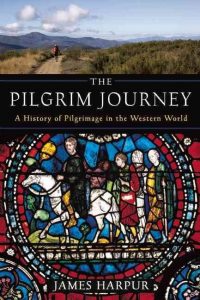 “The Pilgrim Journey” by James harpur

I never thought it likely that I would stumble upon another writer who was as fascinated by the history and trivia of religious pilgrimage as I am. But alas, friends, I have met my match and in fact been bested by one James Harpur in his new book, “The Pilgrim Journey: A History of Pilgrimage in the Western World.”

Mr. Harpur, whose previous published works span a variety of historical, religious, and mythical topics, tackles the history of pilgrimage in the Christian tradition from its earliest days to the modern era, with some pre-Christian pilgrimage history thrown in for good measure. In addition to offering an extensive and even-handed look at religious pilgrimage through the ages, “The Pilgrim Journey” also explores the importance of pilgrimage to the human condition, and its place in the development of the eternal soul.

Philosophically it tackles the fascinating question of what constitutes a successful pilgrimage. Is it merely a visit to a shrine, where supplications are made in exchange for some benefit?  Do pilgrims need to travel for months or years, or is a journey of a few days sufficient?  Does one need to physically journey at all, or can a pilgrimage be a thing of meditation, prayer and self-discovery?

On a more practical note, and to me perhaps more fascinating, are the historical tidbits Mr. Harpur provides on the undertaking of pilgrimages, especially in the Middle Ages: of the great destinations and massive churches; of the now mostly forgotten waystations for pilgrims that once criss-crossed Europe and the Holy Land; of the difficult if not terrifying travel conditions that resulted in many pilgrims never returning home.

For me, one of the most fascinating parts of the narrative is the account of how religious shrines and pilgrimage soared to fantastic heights in the Middle Ages, became an unabashed money-making scheme during the Renaissance, collapsed during the years of the Protestant Reformation, and began to enjoy a rebirth in the 20th century.  All of these James Harpur brings to vivid life in his account, which I found to be well written and thoroughly detailed.

As a history and travel wonk, I personally enjoyed delving into the details (among other things, I am now inspired to travel through the Great St. Bernard Pass and visit the famous hospice of St Bernard). At times the book does dive deep into minutia, but not so much that it causes distraction for the reader.

There are two things I think I would have liked more of. First, some more information on pilgrimage in the modern era.  Second, perhaps some discussion on the Jewish roots of Christian pilgrimage, such as the ancient mandatory visits to the Great Temple in Jerusalem and the importance of the tombs of the patriarchs in Hebron.  But hey, maybe that’s being saved for another book.

Overall I really enjoyed this book. For anyone who enjoys visiting Christian sites in Europe, “The Pilgrim Journey” is a highly recommended read before your next trip.