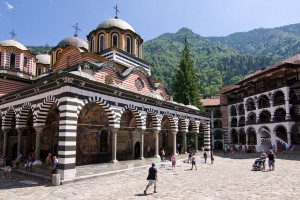 Bulgaria and the Rila Monastery enjoy a special distinction in the Eastern Orthodox Church.  Bulgaria was the first Slavic nation to convert to Chrisitanity, and was home to the first autocephalous Church that was in communion with Eastern Orthodoxy.  John of Rila was Bulgaria’s first aescetic, and by extension the first true monk in Slavic Eastern Europe.  The monastery which he founded was the first in Eastern Europe, and it is now the holiest orthodox site in Bulgaria, if not the entire Balkans.  It is revered by many Eastern European Christians as one of the mother churches of the Slavic lands, and is probably the most popular Orthodox pilgrimage site in Eastern Europe outside of Russia.  The Rila Monastery is a UNESCO World Heritage Site.

In the early centuries of Christianity, the lands of Eastern Europe had long been neglected by Christian missionary efforts, who instead preferred to stick to the familiar old confines of the Roman Empire and to a lesser extent the German lands.  This was especially true after Slavic tribes conquered most of Eastern Europe in the 6th century.  However, as the Middle Ages progressed, the Catholic and Orthodox Churches became increasingly competitive for influence, and by the 9th century the race to evangelize in the Slavic lands was on.

Bulgaria was the first and, to some extent, strategically the most important of the theological battlegrounds.  In 863 AD, missionaries from Constantinople succeeded in converting Boris I, the King of Bulgaria.  However, the astute king did not neccesarily embrace the Orthodox Church, and instead played Rome and Constaninople off against each other in order to get the best deal.  Less then a decade later he had one.  The Church of Bulgaria would become a part of the Eastern Orthodox Church, in communion with the Patriarch of Constantinople, but otherwise politically independent.

The Bulgarian Church grew quickly, and within a generation most of the country was converted.  Among the young men born to the first generation of Bulgaria’s Christians was one John of Rila.  He began life as a shepherd, then later became one of Bulgaria’s first native-born priests.  He later went on to become a hermit, and soon led a small group of devout followers with whom he founded a monstery.  During his later years, John of Rila was Bulgaria’s most celebrated holy man, visited by peasants and kings who sought his wisdom and blessing.  Many miraculous healings were attributed to him.

By the time of his death, John of Rila had become the first truly popular Christian monk of Slavic origin, beloved in Bulgaria and to a lesser extent throughout the rest of southeastern Europe.  Although he never technically lived in the monastery which was founded by his followers as he resided in a cave nearby, it quickly became Bulgaria’s most sacred shrine.  Vast sums of wealth poured in to make the monastery the jewel of the Bulgarian Church.  After a fire in the 19th century, the monastery was quickly rebuilt, even more lavishly than before.  With the fall of communism the Rila Monastery has once again regained its prominence as Bulgaria’s most sacred Christian site, and is one of the most popular tourist destinations in Bulgaria.

The original Rila Monastery, built in stages between the 9th and 18th centuries, was largely destroyed in the 1833 fire.  Most of the current structure dates from the mid-19th century, but is no less impressive than its predeccesor.  The monastery grounds are extensive, and the wall and outbuildings enclose an area several acres in size.  Large, two-story residential buildings line the outer walls and include chapels and library facilities.  The tall Hrelyu Tower dominates the compound.

The centerpiece of the monastery is the Church, an architectural hybrid of Slavic and Turkish styles that give it an almost mosque-like appearance.  It features a large main dome over the central chapel, and a number of smaller domes towards the back.  The church interior is a wealth of decoration and artwork.  The entire interior is covered in beautiful frescoes and icons.  The tomb of John of Rila lies beneath the Church.  The monastery is also home to a museum which contains numerous artifacts including the Rafail Cross, which is covered in finely carved Biblical figures.

The Rila Monastery is located in the mountains of western Bulgaria approximately twenty-five miles south of Sofia, and makes an easy daytrip.  A sizeable tourist industry supports pilgrimages to the site.  The monastery is open daily with varying hours (overnight accommodations are available so it is technically open all the time).  There is no charge for admission, though there is a charge for overnight stays.  Web: www.rilamonastery.pmg-blg.com (official website)

Bulgaria boasts a relatively small but rich collection of beautiful churches and Christian sites that span the last thousand years of history in the Balkans.  Among the most popular sites is the Cathedral of Alexander Nevsky in Sofia, one of the largest and most beautiful Eastern Orthodox churches in the world.  Another revered site is the Bachkovo Monastery outside of Plovdiv, home to the country’s most famous Marian Shrine.