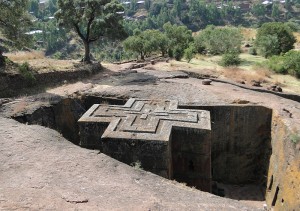 While the Church of St. Mary of Zion in Axum may be Ethiopia’s holiest site, the Rock-Hewn Churches of Lalibela are by far the more amazing and interesting.  This collection of eleven churches was carved from the living rock near the city of Lalibela by the orders of the Ethiopian King of the same name.  While these spectacular shrines are not unique to Christendom, they are the world’s best example of rock-carved churches, Petra in Jordan notwithstanding.  Along with Axum, this is the most visited Christian pilgrimage site in Ethiopia.  The Rock Hewn Churches of Lalibela are a UNESCO World Heritage Site.

As the might of Islam grew in the 8th and 9th centuries, Muslim encroachments on the coastal lands of the Horn of Africa slowly forced the Christian kingdom of Axum to withdraw into the Ethiopian highlands.  By the 10th century most of the coast was under the control of Muslim traders, including parts of the modern-day nations of Djibouti, Eritrea and Somalia.  Even the capital city of Axum eventually became isolated on the periphery, and the Ethiopian kings moved inland to the city of Roha.

Around the time that the Christian Ethiopians relocated to the highlands, the Menelik dynasty was briefly interrupted for several generations, though the Menelik line remained unbroken and was restored eleven kings later.  It was during this period that a great Zagwe ruler, Lalibela, decided to establish his own legacy by constructing the rock hewn churches.  According to tradition, he was divinely inspired and assisted in this endeavor.  The city of Roha was renamed Lalibela in his honor, but he referred to his collection of churches simply as New Jerusalem.  Amazingly, the carved churches were mostly completed in his lifetime.  However, the Zagwe dynasty fell apart soon afterwards.  In the ensuing centuries, most of what had been built in Lalibela became abandoned or neglected, with the exception of the churches.  Collectively these became a major Ethiopian Christian holy site.

Over the years the small collection of churches became the repository of an ever-increasing collection of icons, treasures and relics.  It is possible that during the Muslim occupation of Axum, the Ark of the Covenant was moved here for safekeeping.  Lalibela’s subsequent history was relatively peaceful.  Muslims never reached the inner highlands of Ethiopia in force, so Lalibela remained a Christian stronghold, and the eleven churches were never ransacked or desecrated.  A quasi-monastic priesthood has taken care of the carved shrines and their treasures for centuries.

Unlike the Church of St. Mary of Zion in Axum, the churches of Lalibela and their contents are a lot less mysterious and a lot more accessible to visiting pilgrims.  Today, they are easily the most architecturally interesting churches in Ethiopia, even if Axum is considered to be the more important site.  Because of its central location and religious importance, not to mention its isolation from the Islamic coastlands, Lalibela draws many visitors from throughout Ethiopia.  Lalibela is also home to one of the last surviving remnants of Monophysite Christianity, a heretical movement dating back to the 5th century CE.

The eleven Rock-Hewn Churches date from the 12th and 13th centuries and are unlike anything else in Christian architecture.  Each one is unique in terms of overall structure, size, carving style and decoration.  Some of them are carved directly into large rock-faces, including several that incorporate existing caves.  Others are freestanding structures, literally hewn from the ground in enormous trenches.  Each church also houses its own unique collection of treasures acquired over many uninterrupted centuries.  These include very old Bibles and other illuminated books, precious icons and crucifixes, and even some jewelry of royal or sacred nature.  Some of the churches also boast impressive artwork and wall paintings.

The most famous of the churches is the Bet Giorges, or the Church of St. George.  According to tradition, this was the last one built, ostensibly by request of the saint who appeared to the king in a vision.  This massive monolithic structure stands over eighty feet in height, including the pedestal, and from above takes the form of a perfect cross.  Another of the more popular is the Bet Medhane Alem Church, the world’s largest monolithic religious construction.

The Rock-Hewn Churches of New Jerusalem are located on a hill overlooking the city of Lalibela, about two-hundred and fifty miles north of Addis Ababa.  Although the churches are surrounded by the city on three sides, the site feels somewhat isolated.  The churches are open most of the year, though unscheduled closings can occur during the rainy season which lasts from July through September.  The cost of admission ot the site is US$8.00.  Web: None Available

As in other Oriental Orthodox countries, religious sites and monasteries abound in Central Ethiopia.  This is particularly true by the shores of Lake Tana and the Blue Nile, where Christian places abound.  Among the most important and popular of these is the Tana Kirkos Island Monastery, located on an island in the middle of the lake.