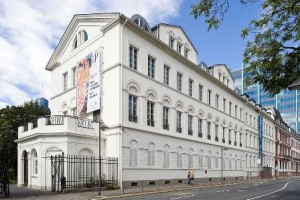 For more than two centuries, the name Rothschild has conjured up visions of fabulous wealth and international prestige.  The Rothschilds, an immensely influential dynasty of Jewish bankers and financiers, was for a time one of the wealthiest familes in the world.  With their ancestral home in Frankfurt, Germany, the Rothschilds later expanded into England, France, Austria and Italy, leaving a collection of palatial homes in their wake that would be the envy of many of Europe’s aritocrats.  The Rothschilds owned a number of enormous residences in Frankfurt.  While the oldest and largest was destroyed during the World War II, one of their other homes now houses the Jewish Museum of Frankfurt.  It is just one of many architectural legacies of this legendary family.

The rise of the Rothschild dynasty was truly one of the great Jewish success stories of the 18th and 19th centuries.  The family’s financial empire was founded by Mayer Amschel Rothschild in the mid- to late-1700s.  A resident of the Jewish ghetto in Frankfurt-am-Main in Germany, Mayer Rothschild began with a small banking and financial concern.  Recognizing early on the growing importance of international financial firms such as those in England and the Netherlands, he envisioned a family-owned company that would eventually spread to all corners of Europe, and by extension, European territories around the world.

Among his innovations was the establishement of new branches in the major financial centers of the day, London, Paris, Vienna and Naples, each of which were run directly by one of his sons.  The entire business remained private and entirely within control of the family, so that it could be run without concern for outside investors.  The first major branch outside of Frankfurt was the one in London, and together these two banks were instrumental in funding the English and Prussian wars against Napolean Bonaparte, a somewhat controversial decision considering the support that Bonaparte showed for the Jews of Europe.

By the end of the Napoleanic wars the Rothschilds were among the richest familes in Europe.  They were certainly the wealthiest Jewish family in the world.  The incredible sums of money at their disposal made them influential throughout Europe, and during the 19th century the Rothschilds of Austria and England had been elevated to the aristocracy.  Throughout that period, the Rothschild banks were involved in some of the world’s most important development projects, such as the financing of the Suez Canal.  They also constructed numerous luxurious homes, palaces and estates across Europe for the enjoyment of their great wealth.

As the age of European empires came to a close and America became the world’s new financial center, the wealth and influence of the Rothschilds waned.  The Naples office closed in 1861 after the unification of Italy; the Frankfurt office closed when that branch of the family came to an end; and the Vienna office closed in 1938 after the Germans occupied Austria.  Most of the Austrian Rothschild’s fortune was turned over to the Nazis in order to buy their escape.  The Rothschild businesses are now run out of London, and while they are a mere shadow of their 19th century incarnations, they are still an important banking concern, and still run completely by the family.

The Rothschilds owned a number of enormous residences in Frankfurt in the 19th century.  The chief of these, and the family’s ancestral home, was laid waste during World War II.  Its location is marked by a small memorial.  The family’s other palatial residence in Frankfurt survived the war, though it was by that time no longer owned by the Rothschilds.  It was later converted to use as the city’s Jewish Museum.

The Jewish Museum of Frankfurt is not so much a Jewish Museum in the traditional sense as it is a collection of artifacts and artwork related to either Judaism or the Rothschilds.  While there are exhibits on Jewish history and culture, there is also an art collection which includes works by giants such as Moritz Oppenheimer.  The museum’s most popular exhibit is a scale model of Frankfurt’s Jewish quarter in the early 18th century.

The Rothschild Palace is located on the southwestern side of Frankfurt’s Old City close to the Untermain Brucke bridge.  The palace and Jewish Museum of Frankfurt are open Tuesdays through Sundays from 10:00am-5:00pm (late hours on Wednesdays, closed on Holidays).  The cost of admission is Eu4.00 for adults.  Web: www.jewishmuseum.de (official website)

The Rothschild dynasty of the 19th century sprawled across most of the major nations of Western Europe.  Among the most famous residences which have survived are the various family homes in Buckinghamshire, England, which include the Halton House, Mentmore Towers and Waddesdon Manor.  There are also three Rothschild Palaces in and around Vienna.