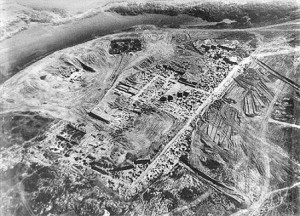 One of the least remembered and arguably one of the oddest side-stories of Jewish history was the existence of an enormous Jewish state in west-central Asia during the Middle Ages.  The Khazar Empire, whose rulers and aristocrats converted to Judaism sometime in the 8th or 9th centuries, may in fact have been the largest Jewish-rulesd realm in history, dwarfing both ancient and modern Israel.  It has been theorized that the Ashkenazi Jews were descended in part from Khazars who had migrated westward into Europe around the 10th or 11th centuries, about the same time as Yiddish-speaking Jews were migrating eastward from Germany.  Archaeologists have only very recently rediscovered the archaeological ruins of Atil, the Khazar capital and possibly the greatest Jewish city of the Middle Ages, and research into the site is currently ongoing.  Few pilgrims have yet visited this pristine Jewish archaeological treasure.

The Khazars were one of a long parade of Turkic peoples who periodically established massive, sprawling empires across the great open plains of Central Asia.  They first appeared in history in the 6th century AD and were probably related to the Huns who invaded Europe two hundred years earlier.  The Khazars filled a unique niche in Jewish history.  During the 7th century the expansion of the Khazars put them into direct contact with the Sassanids to the south and the Byzantines to the west.  As persecution of Jews increased in both the Christian Byzantine and Islamic Sassanid empires, the religiously indifferent Khazar empire became a haven for Jewish refugees.

The Khazars had a long and successful history of playing the various Christian and Muslim states off against each other.  For many years they were allies of the Byzantines against the aggressively expanding Islamic caliphate.  It was likely that Jews fleeing from Byzantium began arriving in Khazaria in large numbers around this time.  Later, when the Khazars established more cordial relations with Islam, Jews began immigrating to Khazaria from Persia and Mesopotamia.  It is even remotely possible that some of the Jews of Khazaria were originally members of the Lost Tribes who had settled in Central Asia more than a thousand years earlier.

The empire of the Khazars became a great cultural bridge across which the Jews of the Middle East stayed in contact with the Jews of Europe.  It was also a major focal-point of the trans-Eurasian trade routes plied by Radhanite Jewish merchants.  At some point in the late 8th century AD, Bulan, the ruler of the Khazars, decided to emulate the rulers of neighboring countries and adopted the God of Abraham.  Since he viewed Judaism as being the older sibling of Christianity and Islam, and therefore superior to both, and since the Jews at that time had no rival monarch, Bulan converted to Judaism and claimed the throne of David for his own.

Amazingly, this worked.  Although the Khazar king was never recognized as David’s successor per se, Khazaria was recognized as a Jewish state, the only one to have existed between 135 and 1948 AD.  The Jewish-Khazar empire lasted for about two hundred years, throughout which time its rulers were in close contact with the important Jewish communities of Mesopotamia and Asia Minor.   Toward the end of the 10th century, the Khazar Empire was destroyed in a series of wars against several of its neighbors, notably the newly Christianized Rus.  They made their last stand in the Crimea in 1016.  While some of the Jews of Khazaria remained in the east, the majority seem to have migrated westward into Europe where they eventually mingled with Jews migrating eastward from Germany.  The Khazar capital of Atil, destroyed in the wars with the Rus, would be forgotten until its reuins were rediscovered in the late 20th century.

The ancient cities of the Khazars, including its capital at Atil, have been ravaged for centuries by wars and the elements.  Anything that might have survived until the 20th century was probably destroyed during the Communist era by the agents of Joseph Stalin, who wished to get rid of any possible evidence of a racial connection between the Jewish and Russian peoples.  It is only in the last decade that serious research into the Khazars has begun again.

The archaeological dig site at Samosdelka outside of Astrakhan is literally just getting underway.  Begun in the 1990s, only a few initial findings have as yet been reported.  There is little else in the way of description available at this time.  However, the ruins of Atil will undoubtedly emerge as one of the most important Jewish archaeological dig sites over the next few decades.

The town of Samosdelka where the ruins are located is fairly isolated, being approximately twenty-five miles southwest of Astrakhan and nearly five hundred miles southeast of Moscow.  Because of the relatively recent nature of the discovery, archaeological work and research is still underway, a situation which is likely to continue for some time.  Thus the Ruins of Atil are likely off the beaten path for all but the most dedicated of tourists.  As of this writing, no visitor information was available.  Web: None available.

Unfortunately, virtually all traces of the Khazar Empire, and especially any associations it had to Judaism, were destroyed long ago.  It is expected that ongoing archaeological work will likely reveal new sites in the near future.