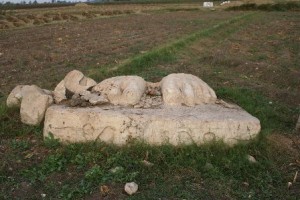 The Land of Goshen in Egypt was home to the Israelite tribes from the arrival of Joseph and his brothers until their departure under Moses sometime around the 15th century BC.  Little remains of their habitation in this empty region east of the Nile River Delta, though the handiwork of their centuries in bondage can be found in the multitude of ruins in the region, notably at Pi-Rameses, the city of Raamses in the Bible.  Despite its proximity to the modern metropolis of Cairo, this ancient desert district west of the city of Al Ismailiyah still remains largely empty of people.  It is thus both fairly accessible and more-or-less pristine for intrepid visitors.

The centuries of the Israelite tribes’ exile in Egypt are bookended by the lives of two of the most famous figures in the Bible: Joseph and Moses.  Both figures are extremely important in Old Testament lore.  Joseph, the eleventh son of Jacob, was kidnapped by his jealous brothers and sold as a slave to Midianite merchants.  But being destined for greater things, after years of servitude he found himself high in the service of the Egyptian pharoh.  Thanks to his foresight and careful planning, Joseph became a hero of the Egyptian people and the pharoh’s court after successfully preparing the nation for a terrible seven-year famine.  When his brothers arrived from Canaan in search of provisions, he enjoyed a bit of revenge before revealing himself at a tearful family reunion.

Joseph then brought his father, brothers and their families to Egypt to live under his protection in peace and plenty.  They were given the land of Goshen on Egypt’s eastern frontier as their own, and their descendents quickly multiplied.  Each of the brothers was the progenitor of a tribe, while Joseph, because of his special status, became the progenitor of two half-tribes, Ephraim and Manessah.  Collectively they were known as the Israelites, after their common ancestor Israel (aka Jacob).  From these humble beginnings, the population of the Israelites grew into the hundreds of thousands over the next four centuries.

At some point in those intervening years, the pharohs of Egypt forgot the origins of the Hebrews, and whether out of fear of their numbers, the desire for cheap labor, or both, the descendents of Jacob were constripted to work against their will.  Goshen went from a welcoming settlement to a vast open slave-labor camp, whose inhabitants toiled to build Egypt’s massive cities and monuments.  Pi-Rameses, the new capital city of Rameses II, was almost certainly constructed by Hebrew slave labor.  But around the same time, a leader arose among the Levites, who through hard work and divine intervention managed to bring the Israelite tribulations to an end.

Around the 15th century BC, Moses and his brother Aaron convinced the Egyptians to let the people of Israel go, and in one of the most exciting stories of the entire Bible, the Hebrews departed the land of Goshen under the aegis of some of God’s greatest miracles.  Their departure left the land of Goshen empty and barren.  Few of the Hebrews if any remained here, and it is unlikely that the Egyptians in Goshen afterwards.  The sudden depopulation of Goshen may have also contributed to the eventual downfall of Pi-Rameses, which was abandoned a few centuries later.

Although there is little uncertainty as to the general location of Biblical Goshen, its full extent and chief centers of population remain something of a mystery.  The cities of Raamses, Pithom and Succoth are mentioned, though there are few details concerning the latter two places.  Raamses is almost universally accepted to be one and the same with Pi-Rameses, the ruins of which are located at what is now known as Tel el-Da’ba.

Whatever his Biblical reputation, the Pharoh Rameses II was a tireless and inspired builder.  Archaeological investigations of the ruins of Pi-Rameses suggest that it was one of the largest cities ever constructed in ancient Egypt.  Recent excavations have found remains of everything from humble homes to grand temples to sprawling palaces.  While the pharohs enjoyed the latter, it is likely that the residents of the former were primarily Hebrew slaves.  Unfortunately, much of the masonry was removed and reused to construct an even newer capital city at Tanis, though the remains of extensive and impressive foundations are scattered throughout the area.

The ruins of Pi-Rameses are located approximately fifty miles northeast of Cairo and can be done as a daytrip via the town of Faqus.  The ruins are in theory an open site but access to some areas may be restricted.  Further details for visitors were not available as of the time of this writing.  Web: www.auaris.at (official website)

In their waning days in bondage, the Hebrew slaves numbered in the hundreds of thousands, and Goshen likely encompassed a wide swath of territory between the easternmost delta of the Nile River and what is now the Suez Canal.  In addition to Pi-Rameses, there are a number of other archaeological sites in the area that may have once been home to the Israelites.  The Ruins of Pithom, as it is called in the Bible, are possibly located at either Tel el-Mashkhuta or Tel el-Rataba, though both might have been Hebrew settlements.  The Ruins of Tanis, located just to the north of Goshen, dates from later years.  However, much of its stonework was pillaged from Pi-Rameses, and may in fact have been carved by Hebrew slaves.  The mummy of Rameses II, the great pharoh of the Bible, can be found in the Cairo Museum.