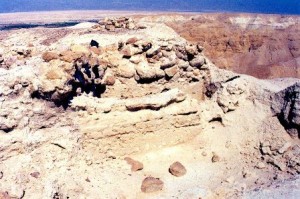 The story of the destruction of the cities of Sodom and Gomorrah has long been considered allegorical, if not outright mythical, even among the most devoted of Bible scholars.  The truth of this strange side story in the patriarchal histories is elusive.  However, there is every reason to believe that Sodom and Gomorah and the other three Cities of the Plains did exist in Abraham’s time.  There are at least two clusters of archaeological sites along the shores of the Dead Sea, one in the north and one in the south, that modern scholars believe might be the remains of this famous Biblical pentapolis.  There is also strong evidence to support both theories, and both sites now attract archaeologists, theologians and the curious in search of hard evidence of God’s divine wrath.

The aptly named Dead Sea is one of the most desolate bodies of water on Earth.  Except for its extreme northern end where it is fed by the Jordan River, the shores and lands around the sea are generally inhospitable to human habitation.  This was not always the case, and the Dead Sea region was home to some of Canaan’s earliest and most famous major settlements.  At the time Abraham and Lot arrived in the region, the mighty city of Jericho stood at the northern end of the sea, while the southern end was dominated by a confederation of five cities known as the Cities of the Plain.  This ancient pentapolis consisted of the cities of Admah, Zoar, Zeboim, and of course, Sodom and Gomorrah.

As the Biblical story goes, after Abraham and Lot had been settled for some time in Canaan, it was becoming increasingly difficult for their extensive flocks to share pasteurage.  In order to avoid a family quarrel, the two men decided to part ways.  Lot took his family, servants and flocks and moved off to the southeast where he resettled in the Valley of Siddim near the Dead Sea.  He was subsequently drawn into the drama of sinful Sodom where four of the five Cities of the Plain were laid waste by earthquakes and fire from the skies.  While Lot and his daughters escaped the devastation, his wife was turned to a pillar of salt for daring to look upon the cataclysm.

While the exact location of the Valley of Siddim has long been a mystery, the geological evidence that points to the Dead Sea region is more-or-less undisputed.  According to the Hebrew Bible, Lot traveled southeast from Abraham’s territory to Siddim.  If the starting point was Shechem, Lot would have ended up at the northern end of the Dead Sea, placing the Cities of the Plain near the metropolis of Jericho.  Furthermore, the Bible states that Siddim was well-watered, which again points to the northern end and of the sea and the Jordan River Valley.

The leading contender for the location of the Valley of Siddim and the ruins of Sodom is the town of Bab Edh-Dhra at the southern end of the Dead Sea.  The region around Bab Edh-Dhra contains extensive mineral deposits, including sulfur and bitumen, which give the area an infernal look and feel.  It has been suggested by scientists that the destruction of the Cities of the Plain was initiated by an earthquake that in turn triggered the release of vast quantities of natural gas which may have ignited Sodom and Gomorrah into raging infernos.

A number of archaeological discoveries in recent years point to Bronze Age settlements in the area around Bab Edh-Dhra, which would have put them in the right time period with the Patriarchs.  These are believed to be the remains of Sodom or perhaps one of its neighbors.  A few miles to the south are more ruins near the village of Numeira.  These bear great similarity to those of Bab Edh-Dhra, making it a candidate for yet another of the other five cities of Siddim.

The ruins at both Bab Edh-Dhra and Numeira are located south of the Dead Sea close to the border with Israel, approximately twenty miles west of the town of Karak and eighty miles southwest of Amman.  They are both open archaeological sites, and are reasonably accessible as a long day-trip from Karak.  As of this writing there were no hours or costs of admission available.  Web: www.visitjordan.com (official tourism website of Jordan)

Many artifacts have been unearthed at Bab Edh-Dhra in recent decades.  Most of these are on display at the Karak Archaeological Museum in nearby Karak, Jordan.  According to Islamic tradition, the Tomb of Lot can be found at Bani Na’im outside of Hebron.