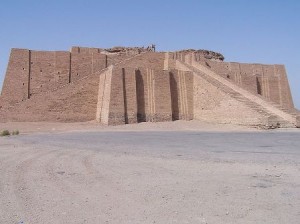 Ziggurat of Ur (wikipedia.com)

Considering the reverence that both Jews and Muslims have for Abraham, it is unusual that so little attention has been given to the place of his birth.  To be fair, it is only in the last two centuries that the site of Ur has been identified with any degree of certainty.  Moreover, the place is nearly ten miles away from the nearest town and virtually devoid of any local population.  Today, Ur of the Chaldees remains as it has for thousands of years, a ruin in the desert, untainted by synagogue, mosque, church or other shrine.  Even the conflicts of recent years seem to have passed it by.  As a result, this archaeological site is nearly virgin territory for religious tourists.

Long before the rise of Islam, or even before the empires of Persia, Babylon or Assyria, the world’s first great city-states arose along the banks of the Tigris and Euphrates Rivers.  Ur was among these, and at its height more than 4,000 years ago it was the capital of Sumeria and possibly the largest city in the world.  But from a Biblical perspective Ur was much more than a great metropolis.  Its importance lay in its mention in the book of Genesis as Ur of the Chaldees.  It was here, approximately thirty-nine centuries ago, that Abraham, progenitor of Judaism, Christianity and Islam, was born.

It is not known exactly when Abraham’s ancestors first arrived in Ur, though some scholars suggest that it was likely during the days of his grandfather.  Whenever it was that the family settled in the area, his father Terah almost certainly resided in Ur at the time of the births of his sons Abraham, Nahor and Haran.  Sometime around the 19th century BC, Terah and his family left Ur for Canaan.  Beyond that there is no further Biblical mention of Ur, except in Nehemiah, but only as a reference back to Genesis.

Around the time of Abraham’s residency, Ur was conquered by the Elamites.  It may have been this event that drove Terah and his family to migrate westward.  Later, Ur was absorbed into a succession of Mesopotamian states, including Assyria and Babylon.  The city’s decline appears to have begun around the time of the arrival of the Persians. Neither they nor their successors put any effort into maintaining the place, and by the Roman era Ur was virtually abandoned, at least until archaeological excavations in the 1800s and 1900s rediscovered Ur and its massive step period.  Dated to the 22nd century BC, it is almost certain that Abraham once gazed upon the great ziggurat.

Despite the Biblical importance of the site, its reasonably easy access at the southern end of the Tigris-Euphrates River Valley and a century of British control over the region during the colonial period, the ruins of Ur have large areas that have never been excavated.  No effort in recent times has made to rebuild or repopulate the area, and neither has any effort been made to construct a shrine or memorial on the site.  As a result, the ruins of Ur may be one of the world’s most pristine pilgrimage sites of universal Abrahamic interest.

Virtually nothing is left of the ancient City of Ur.  The main site, of course, is the remarkably intact Great Ziggurat.  Built in a series of tremendous steps, it served primarily as a temple to the Sumerian god of the moon.  Several precarious stairways still provide access to the top of the Ziggurat.  Based on the pottery remains found scattered on the upper terraces, the Ziggurat probably once featured a fantastic garden, a luxurious retreat from which the city’s kings and priests could keep an eye on Abraham and his fellow citizens.

In addition to the pyramid, an impressive number of tombs have been unearthed at the site, particularly those of Ur’s royalty.  Most date from the same time period as the Ziggurat’s construction, which means that one or more of the tombs may contain the remains of monarchs who were contemporaries of Abraham.  There are also ruins of marketplaces, housing and the like which provide hints of day-to-day life in Ur during the days of the Patriarch.  Much of what was discovered was later has been moved to the British Museum and other locations outside of Mesopotamia.

The ruins of Ur and the Great Ziggurat are located in the south of Iraq about ten miles outside of Nasiriyah, approximately one-hundred miles northwest of Basra and two-hundred miles southeast of Baghdad.  The ruins can be visited as a day trip from Basra.  Theoretically an open site, the area’s relative inaccessibility and the ongoing conflict in Iraq make visiting the site difficult, if not outright impossible, to visit at the current time.  As of this writing no other visitor information was available.  Web: None Available.

Many of the artifacts found at Ur are now kept at the British Museum in London and the University of Pennsylvania’s Museum of Archaeology.  Ur is one of the very few identifiable, extensive archaeological sites remaining from pre-Assyrian Mesopotamia.  Most of the others have long been rebuilt, built over, or simply never rediscovered.  The Ruins of Babylon, the most famous pre-Persian city of the region, lie to the north, closer to Baghdad.