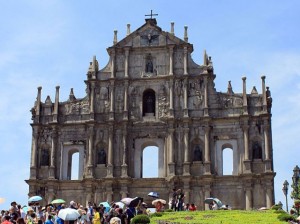 Although the Catholic Church did not penetrate very far into China, or northeast Asia in general, it did gain a strong foothold in the Portuguese territory of Macau, the first and last European colony in China.  Its principal church, the Cathedral of St. Paul, was established by Jesuit Missionaries, and for many years was the largest Christian edifice in the Far East.  Destroyed by fire in the 1800s, its preserved façade has become Macau’s most famous, and photographed, site.  A destination for Catholic pilgrims who come to explore the region’s Christian history, it is also a magnet for other visitors fascinated by the unusual architecture.  The Ruins of St. Paul’s Cathedral are part of the Historic Centre of Macau UNESCO World Heritage Site.

Throughout the 15th and early 16th centuries, Portuguese merchants, explorers and their accompanying missionaries had slowly made their way around Africa, across the Indian Ocean, and around the Indochina Peninsula, establishing trading colonies as they went.  In the 1530s they finally made it to the ultimate Asian goal: China.  The Portuguese were the first Europeans to make it to this nearly mythical land of silks and porcelain, and in 1535 received permission to trade in Macau.

About twenty years later, the Portuguese began building the first permanent colony.  The Roman Catholic Church soon followed.  The famous Jesuit missionary Francis Xavier visited China in 1549, and died there a few years later.  In 1576, the Papacy established a Diocese for the entire Far East, which included all of China, Japan, Vietnam and Malaysia, with the capital at Macau.  After Goa in India, Macau became the most important center of Christianity in Asia.

In the late 16th century, the Jesuit missionaries in Macau built the first major cathedral in China.  Although predated by a few other cathedrals in the Spanish Philippines, St. Paul’s Cathedral was the largest and most important Catholic church in the Far East for many years.  Macau and its church became an important refuge for Japanese Christians in the wake of persecutions which swept Japan in the 1620s and 1630s.  Skilled Japanese craftsman helped to complete the cathedral’s famous façade.

Even after the eclipse of the Portuguese Empire in the 17th century, Macau was steadfastly maintained as a colony for hundreds of years; and throughout this period Macau remained the center of Catholicism in China.  However, in 1835, a fire swept through St. Paul’s Cathedral.  Rather than rebuild, a new cathedral was constructed.  However, nostalgic civic leaders had the façade preserved in memory of Macau’s long and proud Catholic history.

The location of the Cathedral of St. Paul is quite dramatic, and one of the reasons why it is such a popular tourist destination.  Perched on top of a tall hill, the cathedral is not fronted by a typical colonial-style plaza; but rather by a grand staircase consisting of 66 stone carved steps.  These must be climbed in order to reach the perfectly preserved façade, which has been featured on postcards since the 19th century.  What remains of the church is considered to be among the finest examples of colonial architecture in the Far East.  The facade is particularly famous for its blending of Asian and European artistry in the carving details, courtesy of the early Japanese craftsman who worked on it.

Behind the façade virtually nothing remains, although the church floorplan is preserved, as are bits of the outer walls.  Recent excavations discovered early Chinese Christian artifacts, as well as relics of both Jesuit missionaries and the famous Japanese martyrs. These are now preserved at the site as part of a museum.

The Ruins of St. Paul’s Cathedral are on the west side of the old city of Macau, about 25 miles west of Hong Kong and easily accessible by ferry.  It is open daily from 9:00am-6:00pm.  Cost of admission was not available as of this writing.  Web: www.macautouristguide.com (official tourism website of Macau).

Macau has a number of Catholic churches dating from the colonial period.  Perhaps the best known of these, aside from the Ruins of St. Paul’s Cathedral, is St. Dominic’s Church, which is also home to a small museum.