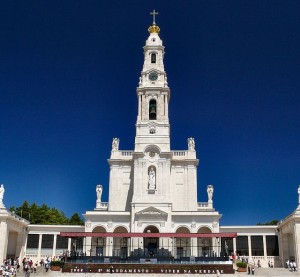 The Sanctuary of Our Lady of Fatima is the most revered Catholic site in Portugal.  It stands on the site where a trio of young children witnessed an apparition of the Virgin Mary in 1917.  Small compared to the much larger Marian Shrines at Lourdes and Aparecida, it is nevertheless one of the finest 20th century cathedrals in Europe.  Although it is perhaps less well known than some of its brethren, the Sanctuary nevertheless attracts comparable crowds.  Several million pilgrims visit the shrine every year to pay their respects to the Virgin Mary.

As in the case with Lourdes, the history of the Marian Shrine of Fatima began with a vision of the Virgin Mary appearing to children.  In this case three, Lucia Santos, Jacinto Marto and Francisco Marto.  As the story goes, the children witnessed the apparition for the first time on May 13, 1917.  It was the first of six visions, each occuring on the 13th day of each month between May and October.  There was one thing that differentiated the visions at Fatima from other Marian events around the world.  During the appearance, the apparation entrusted the children with three secrets, a combination of warnings and prophecies of future events.

Naturally, word of the strange appearances spread like wildfire.  The faithful and the curious began to visit to the region.  There was skepticism as well, in particular from a local governmental leader.  The children were even imprisoned for a short time, but quickly released do to popular outrage.  As proof of the miraculous events, the children announced that a miracle would occur at Fatima on October 13, the day of the final apparition.  Tens of thousands gathered in Fatima.  Lucia Santos instructed the crowd to watch the sun, and before the eyes of the devout pilgrims, the sun began to dance and change colors.

This miracle, known as the Miracle of the Sun, was witnessed for many miles around, and cemented forever Fatima’s reputation as a holy site.  To further strengthen the legend of the miracle, no unusual astronomical or weather phenomenon was scientifically recorded on that day.  Work began on the Sanctuary about a decade later.  The shrine was completed and consecrated in 1953, while Lucia Santos would live until 2005.  All three of the children were later interred within the Sanctuary.  Jacinto Marto, who died from influenza in 1920 at the age of ten, was the youngest person ever beatified by the Catholic Church who did not die as a martyr.

An interesting side story involves the three secret visions imparted to the children in 1917.  The first was a fiery vision of Hell, seemingly designed to encourage penitence.  The second was an admonition that the world would be plunged into an even greater conflict than World War I if people did not repent.  Specifically, it added that Russia must be converted to Catholicism or another war would come to pass.  This has been interpreted as a warning against Russia’s embracing of Communism, which took place soon after the the event.  The third secret vision, only made public a few years ago, was of a city in ruins, and many Christians martyred.  No definitive explanation has been given of the meaning of this final, most controversial secret.

The Sanctuary of Our Lady of Fatima is a stunning structure which dominates a great plaza not too far from the center of Fatima.  Its appearance is somewhat reminiscent of the Basilica of Lourdes, one of its contemporaries, and features modern and baroque elements.  A tall bell and clock tower towers over the front of the church, though this is not its most interesting feature.  On the façade of the basilica, flanking the tower, are enormous pictures of Jacinto and Francisco Marto.  As far as extensive research was able to discern, no other church, cathedral, chapel or shrine in Christianity features such unique and odd exterior elements.

The interior of the main basilica is an impressive white-marble affair that is far more simple and elegant than might be expected of such a shrine.  The tombs of the two younger witnesses are within.  However, it is not the magnificent basilica that is the center of focus at the Sanctuary, but rather the small, highly modernistic Chapel of Apparitions which stands on the site where the visions of the Virgin Mary actually took place.  A small statue of Mary marks the exact location of the apparition’s appearance.

The Sanctuary of Our Lady of Fatima is the heart and soul of the city of Fatima, approximately eighty miles north of Lisbon, from which it can be easily visited as a day trip.  As of this writing, visitor information for the Sanctuary was not available.  Presumably the chapel is open at all times.  There is no charge for admission, though donations are encouraged.  Web: www.santuario-fatima.pt (official website)

Central Portugal is home to a number of interesting Christian sites, in particular monasteries.  The 12th century Convento de Cristo in the city of Tomar was once the headquarters of the Order of the Templars and one of that knighthood’s last major strongholds.  The Mosteiro de Santo Maria da Vitoria in Batalha is one of the largest and most beautiful in Iberia.  There are also a variety of noteworthy churches and Christian sites in the city of Evora, including the gruesome Capela dos Ossos, or Bone Chapel.