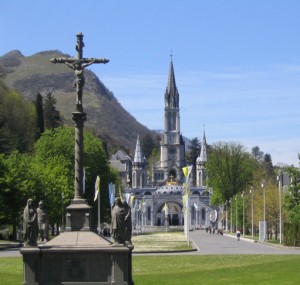 Of the countless Marian shrines around the world, the Massabielle Grotto in Lourdes is the undisputed reigning champion in terms of fame.  Every year, millions of pilgrims visit the place where young Bernadette Soubirous saw eighteen visions of the Virgin Mary in 1858.  Most come here just to venerate Mary, while many come for the waters of the grotto, which are said to contain healing powers.  In fact, several genuine, verified medical miracles have been associated with the shrine, adding to both its history and its popularity.  Lourdes is one of the most visited shrines in Europe, and is probably one of its most popular Christian pilgrimage destinations in Europe not directly tied to the history of the early Church.

Until the middle of the 19th century, Lourdes was just another small French agricultural town.  However, a series of miraculous visions and events in the 1850s and 1860s sent it soaring into the pilgrimage stratosphere.  On February 11, 1858, a young girl named Bernadette was walking near the Gave de Pau River when she received her first vision of a white-robed Virgin Mary.  Initially afraid, Bernadette subsequently received another seventeen visions, during which she was instructed to build a chapel.  To emphasize the point a spring spontaneously arose from the ground during one of her later visions.  This would later fill and become the famous pool associated with the shrine.

The local church did build a chapel per Bernadette’s request, and soon the place was attracting local pilgrims.  The focal point was Bernadette’s spring and a statue of Mary placed where the vision had been seen.  By the mid-1870s, there were reports of miraculous healings, and the small devout following soon became a torrential flood of pilgrims.  A new basilica was erected in 1876 to accommodate the hordes of visitors.  Meanwhile, Bernadette, exhausted from the constant attention, withdrew into a convent, where she died of tuberculosis in 1879.  According to legend, she refused to be treated by the water of the spring, despite the fact that it had successfully healed her of asthma years earlier.  She was later canonized.

As the 19th century came to a close, the Basilica at Lourdes began to receive international acclaim.  Due to the sheer volume of reported miracles at the site, the Church and other organizations began to investigate.  As it turned out, while the total number of actual healings of a miraculous nature was relatively low, it still had the highest success rate of any similar shrine in the world.  To this day there are unexplained cases of miraculous healings at Lourdes.

In 1909, Bernadette’s body was exhumed for examination, and in the presence of reliable witnesses, appeared to have resisted significant decomposition.  This miracle was also attributed to the power of the shrine.  Subsequent exhumations further reinforced the miracle.  Bernadette was canonized by the Roman Catholic Church in 1933.  The Shrine of Lourdes is one of the most popular places of pilgrimage in the world.  No other modern-day Christian shrine has more miracles directly associated with it.  Lourdes is especially busy during the summer months, when nightly candlelit processions illuminate the way to the grotto.

If there were such a thing as a fairy-tale cathedral, the Basilica of Lourdes would be it.  Rebuilt on a grandiose scale in the 1950’s, the basilica exhibits a surprising 19th century charm reminiscent of a Romantic age Bavarian castle.  The white stone of the cathedral stands out amid tree-covered rolling hills.  There are actually several churches and buildings on the site, the main one being the Basilica of the Immaculate Conception.  The main entrance to the shrine consists of a pair of enormous causeway-like ramps which lead to the cathedral above and a great gate between them that leads to the grotto below.  The grotto is also accessible via its original side entrance.

The Massabielle Grotto, the heart of the shrine, is a smallish cave furnished with an altar, seating, and various artifacts associated with Bernadette’s miracle.  A niche marks the place where the eighteen visions of the Virgin Mary were seen.  Inside the niche is a statue of Mary, Our Lady of Lourdes, dressed in white.  A plaque marks the spot where Bernadette stood during her encounters.  The spring is at the back of the grotto.  It is accessible to pilgrims via drinking taps and, for the more devout, full-fledged baths.

The Sanctuary of Lourdes is practically the raison d’etre of the city of Lourdes.  Virtually the entire city is geared towards accommodating pilgrims and visitors to the shrine.  The basilica is just outside the center of the city of Lourdes, approximately five hundred miles south of Paris near the border of Spain.  It is open from Easter to October from 6:00am-7:00pm, and from November to Easter from 8:00am-6:00pm.  The grotto is open daily from 5:00am-midnight.  There is no cost of admission other than voluntary donation.  Web: www.lourdes-france.org (official website)

The area around is a quiet region nestled on the frontier between the Catholic behemoths of France and Spain.  Although the Camino de Santiago passes through here, it was only the advent of the miracles of Lourdes that put the region on the map.  The body of Bernadette Soubirous is preserved in the Chapel of Bernadette in the city of Nevers in Central France.