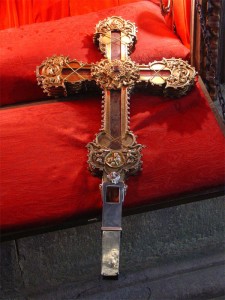 The Santo Toribia De Liebana Monastery, tucked quietly away in a northern corner of Spain, has long harbored one of Christianity’s most coveted artifacts: the largest extent piece of the True Cross that Jesus was crucified upon.  Although critics have expressed pessimism at the authenticity of the True Cross as early as the 4th century AD, there is little doubt that the section located at Santo Toribio Monastery is at least a piece of the cross identified by Helena.  Whatever the truth of it is, the cross was likely used to crucify somebody on Golgotha.  It has been a prized possession of the monastery since the 8th century, which in turn has been a popular pilgrimage destination ever since.  This was especially true in the Middle Ages, when many Christian pilgrims stopped here on their way to visit the Cathedral of Santiago de Compostela.

Of the many artifacts associated with the life of Jesus of Nazareth, none are quite so questionable and yet as prolific as the Lignum Crucis, otherwise known as the True Cross.  In all honesty there is no way of knowing the fate of the cross upon which Jesus Christ was crucified.  In all likelihood it was reused numerous times before being hauled off and chopped up for firewood.  There was certainly no practical reason for the Romans to keep it, and it is highly unlikely that the earliest Christians would have thought to remove it, or have any place to safely store it if they had taken it.

That didn’t stop Helena, the mother of the Emperor Constantine, from finding the True Cross during her tour of the Holy Land in the 4th century.  According to tradition, the Romans had constructed a Temple dedicated to the goddess Venus upon Golgatha in the 2nd century AD in an effort to confound Christian pilgrims who sought to visit their holiest site.  When Helena arrived, she ordered the pagan temple torn down and a church erected in its stead.  During the excavation, a trio of crosses was discovered buried under the temple, along with a number of crucifixion nails.  Helena, her experts, local clergymen and other witnesses declared on the spot that these were the crosses used in the martyrdom of Jesus Christ and the two thieves who died with him.

The story goes on to recount how Jesus’ cross was identified when it miraculously healed a supplicant who touched it.  It immediately became the Church’s greatest artifact, and would not be surpassed in popularity among pilgrims until the rediscovery of the Shroud of Turin centuries later.  The cross Helena discovered was so popular that it was eventually broken apart and dispersed to numerous locations, notably the Holy Sepulchre in Jerusalem and the the Hagia Sofia in Istanbul.  This process went on throughout the ages, and there are now literally hundreds of fragments of the Lignum Crucis scattered across the world.

In the 6th century AD, a Benedictine Monastery was founded in the Cantabria region of Spain.  Sometime in the 8th century, Christians fleeing from Muslim-occupied Palestine arrived in Spain bringing with them a number of religious relics and artifacts, among them a hunk of Helena’s Cross.  They brought the piece of the cross to Cantabria as it was one of the only places in Iberia not then in the control of the Moors.  It was left in the safekeeping of the monks of the Santo Toribio Monastery where it has been ever since.  According to the monastery records, only one small piece of the artifact was subsequently removed.  What is left is the largest surviving fragment of Helena’s Cross anywhere.  It has been one of the world’s most venerated Christian artifacts ever since.

The Santo Toribio De Liebana Monastery is located in the quiet green hills of Cantabria in Northern Spain.  While the monastery was founded in the 6th century, the majority of the compound, including the main gothic cathedral, dates from the 13th century.  The cloister was built even later.  Most of the buildings are constructed of white brick and topped with red-shingle roofs, and even though the construction spans a vast period, the whole is surprisingly harmonious.  The dominant external feature, if there is one, is the low bell tower at the center of the complex.

The highlight of the monastery is the piece of the Lignum Crucis which is kept therein.  It is displayed in a chapel located on the north side of the monastery’s church.  It is the largest surviving piece of the cross identified by Helena in the 4th century.  In 1679 the Santo Toribio fragment of the Lignum Crucis was encased in a silver reliquary shaped like a cross.  This in turn is kept in a large golden display reliquary.

Although the Santo De Liebana Monastery is a major pilgrimage site, it is somewhat isolated along the Spanish coast approximately two hundred miles north of Madrid.  The monastery is open to visitors daily from 10:00am-7:00pm (closed for lunch 1:00pm-4:00pm).  There is no charge for admission, but donations are highly encouraged.  Web: http://santotoribiodeliebana.org (official website)