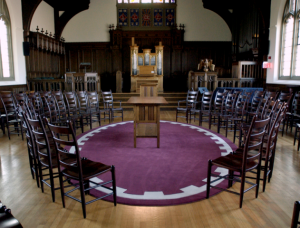 The Boston Theological Institute is possibly the largest religious education institution of its kind in the world. Not itself a school, it is a consortium of ten of the most prestigious and historic theology colleges and departments in the United States.  Some of the oldest divinity schools in the nation are part of the BTI, including the oldest, Andover Newton Theological School.  Its membership spans the western religious spectrum, including various Protestant, Catholic, Orthodox and Jewish schools.  Together they are home to the largest collection of religious libraries books in the world, including numerous special collections worth seeing.  They are, in order of founding:

Andover Newton Theological School traces its roots to the founding of the Andover Theological Seminary in 1807 and the Newton Theological Institution in 1825 (the two merged in 1965). It emerged out of the Reform traditions that dominated New England in the early 19th century.  The Franklin Trask Library special collections include the Bible Collection of the American Board of Commissioners for Foreign Missions, 18th and 19th century sermon pamphlets, and numerous church records for congregations throughout New England.

Harvard Divinity School started as a Harvard College in 1636 and was a training center for Congregationalist ministers during the early Colonial era. The Harvard Divinity School was established as a new entity in 1816, with the mission of training ministers across the Protestant spectrum (now Non-Denominational).  The Andover-Harvard Theological Library, which includes a large part of the original Andover Theological Seminary collection, is home to 485,000 books including the historical archives of the Unitarian Universalist Association as well as nearly two-dozen books that pre-date the Protestant Reformation.  Although not the official library of HDS, Harvard’s Harry Elkins Widener Memorial Library is home to one of the few original copies of the Gutenberg Bible in the United States.

Boston University was founded in 1839 as the first Methodist seminary in the United States. Today the School of Theology is one of the preeminent UMC training centers in the world.  The STH Library is home to collection of materials including spiritual and historical works of Methodist interest, including records of the New England congregations.

Boston College was founded by Jesuits in 1863 to serve the local Catholic community. Although somewhat overshadowed by Harvard, Boston College is one of the most prestigious universities in the United States.  It’s Department of Theology and its School of Theology and Ministry (a graduate school founded in 2008) are both separately members of the Boston Theological Institute.  The college is served by the O’Neill Library (named for former Speaker of the House Tip O’Neill) and the Theology and Ministry Library which together are home to over 2.4 million books.

The Gordon-Conwell Theological Seminary was formed in 1969 as a merger of the Gordon Divinity School (founded in 1888) and the Conwell School of Theology (founded in 1889). The libraries of GCTS, the Goddard Library and the Bruce Jackson Memorial Library, are both individually members of the Boston Theological Institute.

Hebrew College is one of the preeminent Jewish seminaries in the United States and arguably the finest such institution in New England. Established in 1921 as an all-Hebrew speaking school, classes are now largely in English.  Hebrew College is a partner of the Pardes Institute of Jewish Studies in Israel.  The Rae and Joseph Gann Library is home to 125,000 books, with special collections on Hasidic Judaism, the Holocaust, Jewish medicine, Hebrew literature and children’s books.

Holy Cross Greek Orthodox School of Theology is one of the oldest seminaries of Eastern Orthodoxy in the United States. It was founded in Pomfret, Connecticut in 1937 and relocated to Massachusetts in 1946.  The university is served by the Archbishop Iakovos Library and Learning Center, one of the largest Orthodox libraries in the country.