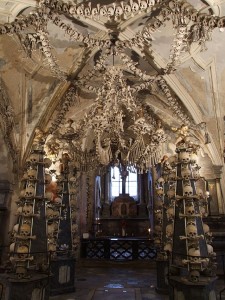 When the Black Plague swept through Bohemia in the 14th century, it left in its wake tens of thousands of dead bodies and a number of innovative Cistercian monks with a lot of time on their hands.  The ensuing six centuries of labor resulted in what is without a doubt one of the most macabre holy shrines in Christendom: the Sedlec Ossuary.  Here, in a chapel that was meant only for burials, the skeletons of untold plague victims were reworked into a fascinating example of hideous yet surprisingly intriguing religious ornamentation.  While not a particularly inviting place of worship (its hard to concentrate while thousands of posed skulls stare at you), the Sedlec Ossuary is nevertheless one of the most popular tourist sites in the Czech Republic.  The Sedlec Ossuary is part of the Historic Town Center of Sedlec UNESCO World Heritage Site.

What should have been an utterly minor and insignificant event in Czech history later turned the cemetery of the Cistercian Abbey near Kutna Hora into one of Central Europe’s most popular places for Christians to go and die in the Middle Ages.  In 1278 AD, the abbot of the church went on a diplomatic mission and pilgrimage to the Holy Land.  The reason for the visit is now unknown, but the abbot did return with a box of dirt from the Hill of Golgotha in Jerusalem.  The dirt was ceremoniously spread over the cemetery, and that should have been that.  However, knowledge of the special dirt spread throughout the region, and many people came from miles around to see the specially blessed cemetery.

Soon people began requesting burial in the abbey graveyard, an honor which became fashionable in the early 14th century.  However, in 1349, the Black Plague reached Bohemia, and the trickle of petitioners for burial turned into a flood.  Thousands of people descended on the place, both in hopes that the sanctity of the spot would spare them, or if not, the hope that they would be buried there.  Thousands of these hopefuls died, of course, and the monks simply could not handle the influx.  Most of the bodies were tossed into mass graves.  Estimates of those interred in this manner number anywhere from twenty to one-hundred thousand.  During the Hussite Wars, thousands more were added to the mix.

In 1400, a new church was built on the cemetery grounds, and a chapel was opened up beneath the church to serve as an ossuary to receive the bones from the excavated graves.  Mountains of bones were stacked in the ossuary and forgotten.  Centuries later, when the monks finally decided to do something with their strange cache, they discovered that someone had arranged a portion of the bones into artistic patterns.  For some unknown reason, this inspired the monks, who then hired a local woodcarver to do something with the bones – and indeed he did.  Beginning in 1870, he proceeded to cover every square inch of both the chapel and church with bone decorations, including bone furnishings.

The work would take most of the rest of his life, but the result was a local sensation.  Pilgrims filled with morbid curiosity came in from all over Central Europe and beyond.  Whether or not anyone ever complained about the sacrilege or at least tasteless use of Christian corpses was academic.  The Church neither condemned nor condoned it, which was good enough for the monks.  The Sedlec Ossuary is now easily one of the world’s strangest Christian sites, and the morbid nature of the place has only boosted its popularity.

The church and chapel are fairly standard examples of 14th century Central European church architecture.  Beyond that, this place is all about the bones.  The remains of an estimated forty thousand bodies have been used to decorate the ossuary.  To add to the indignity, many of the bones and skulls have been cut or broken in order to accommodate the church’s artistic requirements.  The results are nothing short of hideously spectacular.

The variety of designs and uses are staggering.  From simple wall decorations to large, complex artworks, there are hundreds upon hundreds of bone constructions to gawk at.  Among the highlights are: a pair of monstrances (vessels used to display the holy Eucharist) flanking the altar; an exceptionally innovative reconstruction of the coat-of-arms of the Schwarzenberg family; niches filled with carefully constructed stacks of bones; and an absolutely stunning chandelier.  Many of the leftover bones were incorporated into a quartet of massive bells which now decorate the four corners of the church.

The Sedlec Ossuary is located in the small but beautiful town of Sedlec about forty miles east of Prague.  The ossuary is open April through September from 8:00am-6:00pm; March and October from 9:00am-5:00pm; and November through February 9:00am-4:00pm (closed year-round for lunch noon-1pm).  Admission is CZK40.  Web: www.kostnice.cz (official website)

For those who are not spiritually uplifted by the Sedlec Ossuary, Kutna Hora also has some not-quite-so-spooky Christian sites as well.  The two major churches of the city include the Cathedral of Our Lady at Sedlec, and the St. Barbara Cathedral.  Also nearby is the Church of the Assumption of Our Lady in the town of Stara Boleslav.