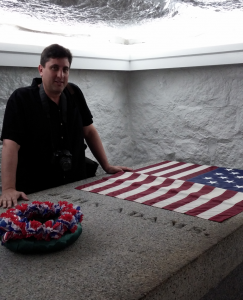 From Memorial Day at the end of May until Independence Day in early July, America goes flag crazy. Flags both old and new are flown with pride.  Temporary flags on makeshift stands pop up everywhere.  At no time is this more true than on Flag Day, a nearly forgotten holiday that falls roughly halfway between its two much more famous relatives.  Honoring the adoption of the first American flag by the Continental Congress in 1777, Flag Day tends to be off the radar.  But if you’re planning on doing some historic sightseeing that day, why not check out some of these famous American flags:

The first true American flag to feature the “stars and stripes” likely dates from the 1770s and has been attributed to famous early Philadelphia native Betsy Ross.  While this claim has been strongly disputed in recent decades, the legend of the Betsy Ross Flag will likely live on in the popular imagine as long as the republic lasts.  Whatever the truth of the matter, however, the original flag itself has since been lost to history.

However, if the Ross legend is true, than it is highly likely that the first American flag was created at what is now called the Betsy Ross House on Arch Street in the historic center of Philadelphia.  The house, now a museum, features exhibits on her life as well as the American Flag.  A replica of the original flag attributed to her is on display here.

Few people are familiar with this flag.  However, based on The Complete Pilgrim research, it appears to be the oldest surviving banner featuring the stars and stripes.  Interestingly, in this age of instant information, it is very difficult to get a straight answer on where the oldest American flag is (though this may be due to the fact that no one really knows).  The strongest claimants are the Forster Flag, which is actually a battle flag with little resemblance to the modern flag; and another flag which is only the ‘oldest that is periodically on public display’.

The Federal Grand Procession Flag was used in a parade in New York City and has been reliably dated back to 1788.  Technically a banner, it does feature the thirteen red and white stripes and blue field with thirteen white stars.  It is currently on display at the New York Historical Society in Manhattan.

There are few historic American flags as well known, or seen, than the fabled “Star Spangled Banner” flag.  So-called because it was the inspiration for Francis Scott Key’s poem that later became the national anthem, the Star Spangled Banner was the huge American flag that flew defiantly over Fort McHenry during one of the most memorable military engagements of the War of 1812.

On the night of September 13-14, 1814, a British naval squadron laid siege to Ft. McHenry.  Despite a ferocious bombardment, the fort remained in American hands.  The failure of the British fleet contributed to the American victory in the defense of Baltimore.  The fort’s flag, which was preserved in a private collection for nearly a century after the battle, is now permanently on display at the National Museum of American History.

Arguably the most famous American flag to ever be captured on film was the Iwo Jima Flag.  Immortalized by photographer Joe Rosenthal in 1945, this flag was the one hoisted by marines at the top of Mount Suribachi during the Battle of Iwo Jima (sort of).  The picture in turn inspired the famous Marine Corps War Memorial Statue which is now on display at Arlington National Cemetery.

The taking of Mount Suribachi was symbolic of the fast collapsing war effort of the Japanese in the Pacific.  A first flag was raised on the morning of February 23 right after the mountaintop’s capture.  A second flag was raised a few hours later in a staged ceremony.  It was this flag that was immortalized.  Both flags are now kept on display at the National Museum of the marine Corps.

After the Iwo Jima and Moon Landing flags, the third most famous photo ever taken of an American flag is arguably that of the 9/11 Flag.  This flag, taken from a yacht anchored near Ground Zero, was hoisted over the rubble of the World Trade Center by firefighters the afternoon after the attack.   It was the iconic moment of a day filled with fear and horror, and still imprinted in the minds of almost every living American.

Interestingly, the flag disappeared almost immediately after the raising (collectors now know the value of such artifacts).  It was several years before the flag was recovered and verified by experts as the original.  After having been displayed at several locations and on tour, the 9/11 Flag is now on display at the September 11th Memorial in Lower Manhattan.

On July 21, 1969, the Apollo 11 mission brought the first American astronauts to the moon, and with them an American Flag.  The planting of this flag was one of the most iconic moments of the mission.  Five more flags were subsequently planted.  Of the six, satellite photos indicate that five are still standing, though they are probably bleached almost to white due to the harsh conditions of the moon’s surface.