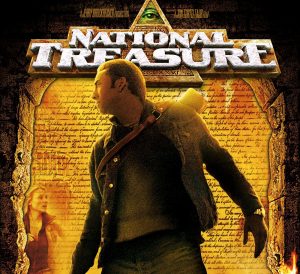 America’s 243rd birthday is fast approaching, with all of the barbecues, parades and fireworks that that entails.  But for those planning on taking in a movie or two on this Independence Day, what to watch?  Well, thankfully, Hollywood has produced nearly a century of films to stir the patriotic fervor of every American’s heart.  But which ones to watch?  As a movie lover, I can think of a hundred films dedicated to Americana that could be recommended for America’s national holiday.  Some are well known, some are obscure.  They range from serious historical dramas to lighthearted comedies.  Here are seven of The Complete Pilgrim’s favorites:

Fictional. One of the earliest major Hollywood films to delve into American politics, this fictional tale stars James Stewart as a young, idealistic politician thrown into the lion’s den of corruption that is the American Senate.  Picked as a replacement of a senator who passed away, Smith arrives in Washington full of hope that can do some good.  He is quickly disillusioned and falsely implicated in a scandal, forcing him into a desperate one-man campaign to fight against the overwhelming odds of entrenched power. Alternate: The Distinguished Gentleman (1992) – A remake of sorts starring Eddie Murphy who goes to Washington intent on being corrupt but eventually becoming a champion of the people

Historical with significant fictional elements. One of the great films of the golden age of Hollywood, this heavily romanticized biography stars James Cagney as the great American composer and showman George M. Cohan.  The movie, told almost entirely in flashback, tells the story of Cohan’s rise from a child vaudevillian actor to one of the greatest producers in the history of Broadway.  Many of Cohan’s most famous patriotic songs, including Over There, You’re a Grand Old Flag and Yankee Doodle Dandy are beautifully performed as part of the story.  This movie is possibly the quintessential Independence Day film and is usually shown every 4th of July. Alternate: The Music Man (1962) – While not strictly a patriotic film, The Music Man has become a staple of the Independence day television lineup

Fictional. A classic comedy starring Bill Murray that tells the story of two desperate losers who join the United States Army after losing everything.  The movie follows the hijinks of the two enlistees through basic training, during which time they inadvertently fall into positions of leadership.  The platoon ultimately gets the attention of big brass and are awarded a top secret assignment in Europe.  Through a series of unfortunate events, the platoon winds up in a minor border scuffle in Czechoslovakia, but everyone comes out okay in the movie’s happy if highly dubious ending. Alternate: Private Benjamin (1980) – Basically the same movie but starring Goldie Hawn

Mostly historical with fictional elements. This amazing film, with an all-star cast led by Ed Harris, tells the story of the early years of the American space program.  It covers the time period from the breaking of the sound barrier in 1947 through the final Mercury mission of 1963.  Some of the greatest heroes of aviation are depicted in this movie, including John Glenn, Alan Shepard and Chuck Yeager.  Noted for its excellent depiction of the space program as well as superior special effects, The Right Stuff was highly critically acclaimed and won several Academy awards. Alternate: Apollo 13 (1995) – Another film about the space program and the effort to rescue three astronauts from the ill-fated titular mission

Fictional. This movie starring Kevin Kline explores the possibility of what might happen if a hopelessly corrupt American president is suddenly replaced by an honest and dedicated body-double.  Ostensibly a comedy, it takes a very serious look at many of the problems America faced in the 1990s, which are surprisingly unchanged in the present day.  It also delves into the subject of the deep corruption in the American government, but offers a hope that in the end the truth will out. Alternate: The American President (1995) – Another fictional look at the American presidency in an age of corruption, with a romantic if preachy twist

Largely Fictional with historical elements. One of several historically-based ‘treasure hunt’ films that were popular in the 2000s, this movie starring Nicolas Cage is a fun romp through early American history.  Based on the premise that the Declaration of Independence contains a secret treasure map, a small band of treasure hunters race from Washington DC to Philadelphia to New York City to find a long lost trove of Templar gold before the bad guys do.  While the plot is thin, it makes for an interesting forum to depict fascinating chapters of early American history. Alternate: National Treasure 2: Book of Secrets (2007) – This less-well crafted sequel features another treasure hunt, this time with a focus on the history of the American Civil War

Mostly historical with fictional elements. A well-written drama starring Daniel Day-Lewis as Abraham Lincoln, this work is considered one of the finest American presidential biographical films ever made.  The story focuses on the last year of the American Civil War and Lincolns struggle to achieve not only a lasting peace but permanent freedom for the slaves.  It culminates with the news that Lincoln was shot while watching a play at Ford’s Theater.  The film was highly acclaimed, with Daniel Day-Lewis’ performances regarded as one of the greatest in the history of Hollywood. Alternate: Young Mr. Lincoln (1939) – Another Lincoln biography, this one focuses on his youth and early career as a lawyer

Here are some other American movies worth watching on Independence Day:

Dances with Wolves (1990) – Academy Award winning film considered to be one of the finest depictions of U.S. government encroachments on the Native American land in the post-Civil War era

Amistad (1997) – True story of the mutiny on the slave ship La Amistad and the subsequent trial in the U.S. Supreme Court regarding the fate of the mutineers

The Butler (2013) – Biography of Eugene Allen, a butler who serves under seven presidents over the course of more than thirty years at the White House