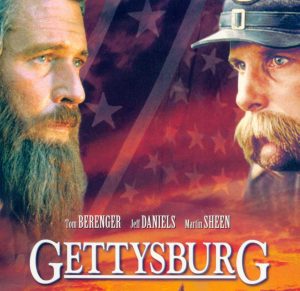 From the earliest days of Hollywood, movies about war have proved to be one of the most prolific and popular cinematic genres; and with America’s military history, there is no shortage of stories to tell. From the American Revolution to the modern day wars in the Middle East, Hollywood has covered everything in perhaps over a thousand films.  But there are a few that stand out from all the rest, both in terms of story-telling and battle scenes.  Some are old Hollywood classics, while others are recent cinematic masterpieces.  All together they tell the sweeping, epic story of the American military.  Here are seven of The Complete Pilgrim’s favorites:

Mostly historical with fictional elements. This classic film starring John Wayne as Davy Crockett is one of the definitive war movies of Hollywood’s Silver Age.  It recounts the Siege of the Alamo of 1836, one of the pivotal battles of the Texas war of independence against Mexico.  Because it was made before the modern era there is a slight cheesiness to the story and acting.  That said, it does a fairly thorough job of telling the history of the weeks leading up to and during the siege.  The final battle sequence featured a cast of thousands and holds up pretty well even six decades later.   Alternate: The Alamo (2004) – A more modern take that also depicts follow-up including the Battle of San Jacinto

Historical with significant fictional elements. This movie, with an all-star cast led by Willem Dafoe, is one of only a handful of war movies to have won the Academy Award for Best Picture.  It follows the tribulations of a new army recruit and the platoon to which he is assigned, amalgamating all of the real horrors of the Vietnam War into a fictional account that takes place over the course of about a year.  The stream of violence and atrocities depicted culminates in a night of brutal close combat, self-inflicted wounds and murder.  The final message is neither one of military victory or moral achievement, merely survival.  Alternate: Apocalypse Now (1979) – An even more nightmarish vision of the war in Vietnam based on the book Heart of Darkness

Mostly historical with fictional elements. One of the best war films of the 1980s, this spectacular movie had an all-star cast including Denzel Washington who won the Academy Award for Best Supporting Actor for his performance.  The story covers a period from 1862 through 1863 during which the Massachusetts 54th, an all-black regiment, is raised, trained and deployed for battle during the American Civil War.  Famous for being the first truly successful movie about African American troops in any war, Glory also helped to usher in the modern age of war movies.  The climactic assault on Fort Wagner at the end of the film is heart stopping.  Alternate: Buffalo Soldiers (1997) – A less well known film about African American cavalry soldiers serving on the American frontier

Entirely historical. This account with a massive cast led by Martin Sheen as Robert E. Lee is counted among the greatest war movies ever made.  Over the course of more than four and a half hours, it follows step-by-step the entire Battle of Gettysburg as it unfolded over the course of four days.  Committed to accuracy in every possible detail, the film used thousands of extras mostly made up of amateur Civil War re-enactors, many of whom brought their own uniforms and equipment.  Parts of the movie were actually shot on the original battlefield in Pennsylvania.  Interestingly, the movie never had a wide release in theaters, but has been very successful on television and on video.  Alternate: Gods and Generals (2003) – A prequel to Gettysburg, this film recounts events leading up to the clash in Pennsylvania

Historical with significant fictional elements. Directed by Steven Spielberg and starring Tom Hanks, many consider this to be the definitive World War II film.  Although the story centers around a small unit of fictional American soldiers, it follows them through a series of events that allows many elements of the Battle of Normandy to be depicted through their eyes.  The unit fights from the storming of Omaha Beach on June 6 until reaching the Merderet about a week later, where most of them are killed.  The movie has been hailed for some of the most accurate depictions of warfare in the modern age, especially when it comes to the treatment of wounds and death.  Alternate: The Longest Day (1962) – A sprawling epic film which covers almost every aspect of D-Day as seen from all side of the conflict

Mostly historical with fictional elements. This production starring Mel Gibson was among the last major war films of the 20th century.  It follows the story of the family of Benjamin Martin over the course of the American Revolution, from 1776 through 1781, with a focus on the events surrounding the decisive Battle of Cowpens.  The film was noted for its historical accuracy (outside of the fictionalized accounts of the major characters), as well as its depiction of the atrocities of war.  The climactic Battle of Cowpens sequence is among the best depictions of a battle of the American Revolution ever committed to film.  Alternate: Drums Along the Mohawk (1939) – A classic film depicting fighting in the Mohawk Valley during the Revolution

Mostly historical with fictional elements. One of the more recent entries on this list, this movie, directed by Clint Eastwood, follows the activities of several marines during the Battle of Iwo Jima.  While part of the film revolves around initial stages of the fighting, including the initial beach landings, the focus of the story is on the marines who raised the American flag on the peak of Mount Suribachi.  The event, captured in one of the war’s best known photographs, brings the men instant fame, along with the inner turmoil that comes from such a moment.  Alternate: Letters from Iwo Jima (2006) – This companion film, made simultaneously with Flags of Our Fathers, tells the exact same story but from the viewpoint of the Japanese defenders of the island

Here are some other American war movies worth seeing:

Sergeant York (1941) – Follows the World War I service of Alvin York, a conscientious objector who went on to become one of the most decorated American soldiers of all time

Patton (1970) – Biographical film of the wartime service of General George Patton, who led the Third Army in campaigns across Europe during World War II

Memphis Belle (1990) – One of the best air combat movies ever made, telling the story of the crew and last mission of the titular American bomber

Pearl Harbor (2001) – A big-budget retelling of the Battle of Pearl Harbor, with a terrible backstory but spectacular special effects