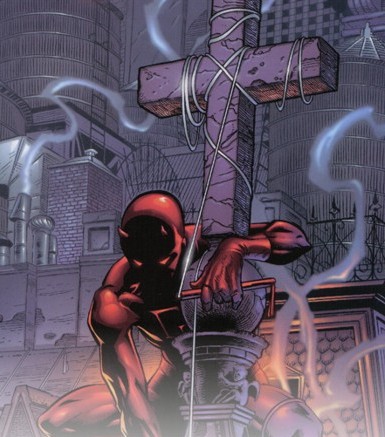 In the year 2000 (has it really been seventeen years?), Hollywood gave us the first film in the X-Men franchise. Since then, multiple film studios have given us ten films in the X-Men franchise; fifteen films in the Avengers franchise (including the Guardians of the Galaxy) with nine more on the way; five Spider Man films; and a handful of other odds and ends.  Movies based on Marvel comics have utterly dominated the box office for the better part of two decades.  Which got me to wondering: who are the most religious comic book superheroes?

It’s a question that rarely if ever has been addressed. There are some Christian Superheroes out there, such as the Faith Walker, but these are few and generally not much in the mainstream.  While many comic book superheroes have been assigned a default faith (more often than not Catholic), very few are depicted as being devout. But there are a few, some of which we have caught glimpses of in movies.  Interestingly, Marvel addresses religion much more frequently than DC comics do, which is why I made this list focus on Marvel characters.  Here is my top seven pick for most devout Marvel superheroes:

Daredevil is one of the oldest superheroes in the Marvel lineup. Created by Stan Lee and Bill Everett in 1964, this famously blind superhero is an expert martial artist and has been a member of several teams, including The Avengers.  Born into an Irish-American immigrant family in Hell’s Kitchen in New York City, Daredevil’s alter-ego, Matt Murdock, is a Roman Catholic.  The character is acknowledged by many Marvel fans as one of the most religiously devout Marvel heroes.  Film Depictions: Ben Affleck (Daredevil, 2003; Elektra 2005)

Captain America is generally considered to be among the greatest comic book superheroes of all time, Marvel or otherwise. Created in 1941 by Joe Simon and Jack Kirby, Captain America is the only major Marvel hero who predates World War II, and was in fact created to fight the Nazis in fiction.  Although Steve Rogers, his alter ego, is Christian, his denomination has never been explicitly stated (he is generally assumed to be Protestant).  In the comics Captain America has expressed his faith on many occasions, and on the big screen one of his best known lines came at Thor’s expense:  “There’s only one God ma’am, and I’m pretty sure he doesn’t dress like that.”  Film Depictions: Chris Evans (The First Avenger, 2011; The Avengers, 2012; The Winter Soldier, 2014; Age of Ultron, 2015; Civil War 2016)