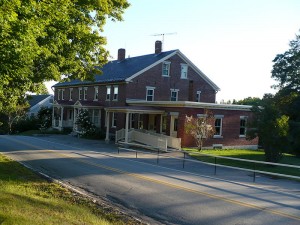 The Canterbury Shaker Village in New Hampshire is probably the best surviving Shaker community in the United States.  Founded in the late 18th century, it was one of several idealized religious communities to be established at the time.  It is undoubtedly one of the best preserved, with over two dozen of its original buildings still standing and in use.  The last permanent resident of the old Shaker village passed away in the 1990s, and the entire site is now preserved as a museum and is one of the most popular tourist attractions in central New Hampshire.

The sect known as the Shakers emerged in England in the mid-18th century.  Essentially a Protestant sect, it espoused some previously unheard of ideas, including communal living and the equality of the sexes.  It was championed by Ann Lee who immigrated to the American colonies in 1774, where she began to establish Shaker communities over the next two decades. 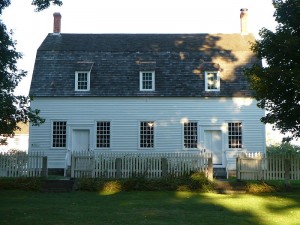 In the 1790s, Shaker villages sprang up all over New England, including at Canterbury in New Hampshire.  Several prominent families of Canterbury were among the early converts, and donations of land were used to house the initial community.  It grew quickly, and by the mid-19th century the Canterbury commune was a thriving village of over three hundred people.

The Canterbury Shaker Village reached its peak at the turn of the century, when modern communications and transportation systems began to integrate the community more closely with the outside world.  It slowly waned over the course of the 20th century, until the last surviving Shaker resident, one Ethel Hudson, passed away in 1992, exactly two hundred years after the village was founded. 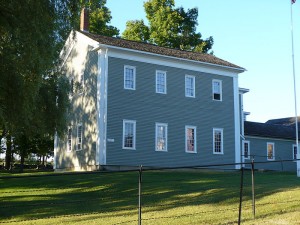 This waning was typical of all Shaker communities. There is now only one remaining in Maine, and that has only a handful of members.  About a half-dozen of these were maintained as museums and historical sites, with the Canterbury Village by far the best preserved and most popular.  Over two dozen of the community’s buildings are still in existence and can be toured.  The village is one of the most visited religious historic sites in New England.

The Canterbury Shaker Village was essentially a commune, with collective housing, working and worshipping facilities.  There are over thirty buildings on the site. Some are recreations, and some are privately owned and not open to the public.  The visitor center, which is a recreation of a 19th century stable, is found on the main road between the community trustees office and the horse barn. 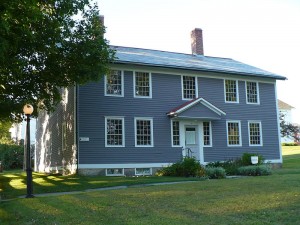 Other buildings on the site are the meeting house, schoolhouse, infirmary and several workshops, some of which are open and host crafts demonstrations.  The largest and probably most interesting building on the site is the Dwelling House, an early 19th century building which served as a communal residence.  It includes the dormitories and kitchens, as well as the community chapel.  Also nearby are additional residences at the Sisters House and Brethren House.

The Canterbury Shaker Village is located among scenic farms, forests and rolling hills approximately six miles west of the town of Canterbury and ten miles north of the capital of Concord.  The village itself is technically an open site, but the buildings are only open when the museum is open.  Hours vary widely throughout the year, but the museum is generally open on weekends year round.  The cost of admission is $17.00.  Web: www.shakers.org (official website).

There are about a half-dozen Shaker Villages in various states of preservation, most of which are located in the northeast.  These include the Enfield Shaker Museum, also in New Hampshire; the Hancock Shaker Village in nearby Massachusetts; and the New Gloucester Shaker Village Museum in Maine.