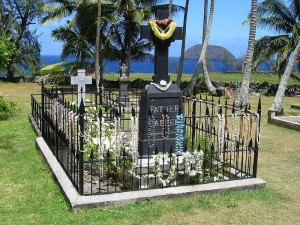 Jozef De Veuster, better known as Father Damien, may be America’s best known saint, at least outside of the United States.  A Catholic missionary to Hawaii in the 19th century, Father Damien became renowned for his work at one of the world’s most famous leper colonies.  His ministry lasted throughout much of the second half of the 19th century before he succumbed to the disease he worked so hard to treat.  A highly honored figure in Hawaii, his shrine on the island of Molokai is one of the most important and popular religious sites in the Pacific.

Jozef De Veuster was born in Belgium in 1840 into a highly pious family.  Three of his siblings took vows with the Church, and Jozef was determined at a young age to join them.  Not considered a good candidate for the priesthood, he instead sought the opportunity to serve as a missionary.  In 1863, he was chosen to replace his brother who became too ill to undertake an assigned mission to the Pacific.  In 1864 he arrived in Honolulu.

His first assignment was to the Big Island.  Around this time, the islands were becoming rampant with diseases brought by increasing numbers of western visitors.  Among these diseases was one of the most dreaded, leprosy, which was spreading through the populace.  Much of Father Damien’s ministry was spent aiding the sick, but his greatest concern was to help those suffering from leprosy.

Beginning in 1866, in a desperate effort to halt the spread of the disease, those with leprosy were relocated to a colony on Molokai and isolated.  This colony, underfunded and undersupported, soon became a nightmare for its residents.  In 1873, Father Damien and three other priests volunteered to go to Molokai.  There he built a new church, helped to get the community better organized, and worked diligently to alleviate the sufferings of those in his charge.

Father Damien is credited with saving the leper colony from total anarchy.  In 1884, he himself contracted the disease.  However, he lived on for another five years continuing his work.  He died in 1889.  The story of his life and work, promoted by the Hawaiian royal family, became a worldwide inspiration, impacting such people as Mahatma Gandhi.  He was canonized in 2009.

The Shrine of Father Damien is the most revered Christian site on the Hawaiian Islands.  Upon his death in 1889, he was buried on the spot where he first slept when he came to Molokai.  His grave became an overnight pilgrimage destination, visited by many who came to the islands.  In 1936, the remains were removed and transported to Belgium where they were reinterred.  Only part of the body was returned after his canonization.

The shrine itself may enjoy one of the most beautiful settings of any Catholic saint anywhere.  A simple grave marked by a stone cross and surrounded by a small fence, Father Damien’s original resting place is surrounded by palm trees and typically draped with homemade leis of flowers.  The only part of the saint which is buried on the site is his right hand.

The Shrine of Father Damien is located on an isolated beach on the north shore of the island of Molokai, approximately fifty miles east of Honolulu.  It is immediately next door to St. Philomena’s Church.  The grave is an open site.  There is no cost of admission.  Web: www.fatherdamien.com (official website).

Father Damien is one of the most honored figures in Hawaiian history.  A Statue of Father Damien stands outside of the Hawaii state capitol building.  The rest of his body is buried in the Church of the Sacred Hearts in Leuven, Belgium.