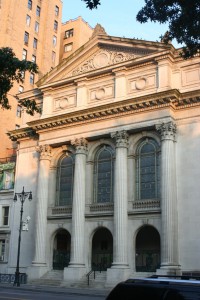 In many ways, the history of the Jews in America is synonymous with the history of the Jews in New York City.  Although not technically the first nor the most important Jewish congregation in America in the early years, the Congregation Shearith Israel was nevertheless the foundation stone of Judaism in New York City, and therefore played a pivotal role in the development of Jewish life in America.  From its humble beginnings in the 1650s to the city’s first synagogue on Mill Street in 1730 to the magnificent Spanish and Portuguese Synagogue on Central Park West, the Congregation Shearith Israel has been a driving force in the cultural and religious heritage of New York City.

In the mid-1600s, Sephardic Jews fleeing from persecution in the New World colonies of Spain and Portugal made their way northwards in the hopes of resettling in the more tolerant colonial territories of Holland and England.  The first arrivals settled in what was then the city of New Amsterdam (New York City) and nearby Newport, Rhode Island.  The refugees almost certainly arrived in New Amsterdam first, but for a few years their immigration status in the Dutch colony was officially in dispute, and the Jewish colonists were not technically recognized by the local authorities. 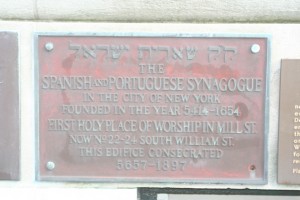 Eventually, after several years of legal wrangling, the Jews were allowed to settle in New Amsterdam permanently.  Shortly afterwards they founded the Shearith Israel, the city’s first Sephardic Jewish congregation.  From this tiny seed, New York’s Jewish community began to grow.  For the next two centuries, New York was one of two major centers of Jewish life in America.  Interestingly, by the 1700s the Jewish population of New York was actually surpassed in size by that of Charleston, South Carolina, a situation that persisted for over a century.  This was due in large part to the fact that the majority of early Jewish immigrants came from South America and the Caribbean, and the port of Charleston was simply much closer.

It took a long while for Shearith Israel to set down real estate roots in New York City.  Although the congregation had established a cemetery as early as the 1650s, the first permanent synagogue on Mill Street wasn’t built until 1730.  The congregation grew at a steady pace ever since, requiring three moves over the next three centuries.  New synagogues were established on Crosby Street and 19th Street, before Shearith Israel finally settled into its permanent home at the Spanish and Portuguese Synagogue on Central Park West in 1897. 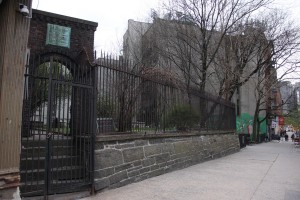 Congregation Shearith Israel was a dynamic force for the introduction of new ideas and institutions in Jewish America.  It pioneered the idea of Conservative Judaism as being distinct from Orthodox and Reform Judaism.  In 1886 Shearith Israel established the Jewish Theological Seminary of America as a conservative rival to Hebrew Union College.  Its members also helped to establish both the United Synagogue of Conservative Judaism and the Orthodox Union.  Shearith Israel has unequivocally established itself as one of New York’s great religious institutions, and its landmark Spanish & Portuguese Synagogue as one of the city’s architectural treasures.

The current Spanish and Portuguese Synagogue is actually the fifth synagogue used by the Congregation Shearith Israel.  It is named for the Latin Jewish origins of its founders.  Completed in 1897, it is a neo-Classical masterpiece well suited to a neighborhood filled with architectural marvels.  The magnificent façade with its quartet of columns and tall, peaked room looks as though it had been lifted straight out of ancient Rome. The building incorporates materials from several of the congregation’s earlier synagogues. 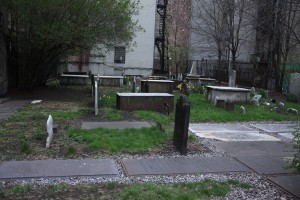 The synagogue interior is equally impressive, from its beautiful crystal chandeliers to the Tiffany windows.  Among the synagogue’s treasures are its archives, which chronicle three and a half centuries of Jewish life in New York City.  The adjoining chapel, known as the Little Synagogue, is actually a replica of the congregation’s former house of worship on Mill Street.

The Spanish and Portuguese Synagogue is located on Central Park West in Manhattan, a short walk from other architectural landmarks of the Upper West Side.  It has recently undergone a massive restoration.  Opening hours for the synagogue vary, though services are held most days (see official website for schedule).  There is no cost for admission.  Web: http://www.shearithisrael.org/ (official website) 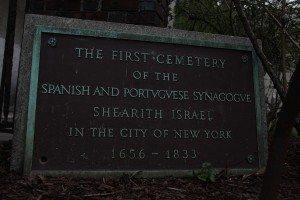 The original Shearith Israel Graveyard, located in Lower Manhattan, is the oldest extent Jewish Cemetery in America.  Dating from the 1600s, it may be the oldest site in New York, Jewish or otherwise, still in existence.