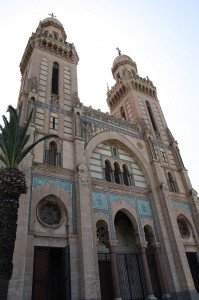 The shrines of Augustine of Hippo, one of the greatest theologians in the history of the Church, are the most revered Christian sites in North Africa.  The city of Annaba in Algeria, formerly the Roman metropolis of Hippo Regus, is home to two holy places closely associated with the saint: the Basilica of Peace, where Augustine once served as the city’s bishop; and the Basilica of St. Augustine, where a fragment of the saint’s relic can be found.  So revered is Augustine locally that even the Muslims of Annaba honor him as one of the city’s favorite sons.  Despite the importance of the churches of Annaba, relatively few modern day Christian pilgrims find their way to this fascinating site on the Algerian coast, though local tourism authorities are working hard to attract greater numbers in the future.

Augustine of Hippo was born in 354 AD in Tagaste in what is now Algeria.  His mother, Monica, was an extremely pious woman who herself was canonized by the Church.  His early life was spent in intellectual and worldly pursuits as he went about discovering himself.  At first rejecting Christianity outright, he later embraced Manicheanism, a gnostic Christian religion condemned by the general church.  He spent most of his twenties living unmarried with his mistress, with whom he had a son, and teaching rhetoric in Carthage.  Around the age of thirty he moved to Italy, where he began to reconsider his faith and his career.

Augustine spent a year in Rome teaching rhetoric before being discovered by the city prefect, who recommended him to become professor of rhetoric at the imperial capital in Milan.  There he moved away from Manicheanism and began to study skepticism and Neoplatonism.  Under the influence of his mother and his friend Ambrose, the Bishop of Milan, Augustine ultimately embraced Catholicism, and formally converted in 387.  It is thought that his years of independent intellectual pursuits, philosophical studies and acquaintance of heretical teachings prepared him for a life in the Church unlike anyone who had lived before him.  His own background gave him new ideas and fresh insights into Christianity which would characterize his subsequent writings and teachings.

In 388 Augustine returned to Africa to begin a life of service to the Church.  He began by selling all of his possessions and turning the proceeds over to the poor.  His family home was converted to use as a small monastery.  In 391 he became a priest, eventually rising to the position of Bishop of Hippo Regus in 396.  He would serve in this capacity for the next thirty-four years.  During this period he was one of the most prolific writers and thinkers of the Church.  He is known to have authored hundreds of books, letters, commentaries and sermons, many of which survive to the present day.  His three masterworks, Confessions, On the Trinity and City of God, are all cornerstones of modern Christian theology.

As Bishop of Hippo Regus, Augustine worked and preached in the city’s Basilica of Peace.  The basilica, one of the earliest to be built in North Africa, was one of the city’s few buildings to survive the onslaught of the Vandals in 430 AD.  Augustine died during the Vandal siege of the city, and was buried in a crypt beneath the Basilica of Peace.  His body was later moved for safety to Sardinia, and then later to Pavia in Italy.  In the 19th century, the ancient city of Hippo Regius was recovered by European Christians.  A new basilica was constructed in the city in honor of Augustine, and part of his relic returned there for internment.  The Basilica of St. Augustine in Annaba has been the chief destination for Catholic pilgrims in North Africa ever since, though few have visited in recent years.

Both of the churches associated with Augustine of Hippo are located in the city of Annaba.  The ruins of the Basilica of Peace, destroyed many centuries ago, are now part of the vast archaeological site of ancient and medieval Hippo Regius.  While little is left of Augustine’s ancient church, it is easily identified by the foundations of the walls and the bases of the rows of columns.  The place where his crypt was once located is identifiable, though nothing is there now.

The Basilica of St. Augustine is a relatively recent addition to Annaba.  It was built in the late 19th century during the French colonial occupation of Algeria.  Fittingly, it was constructed on a hill overlooking the ruins of Hippo Regius and the old Basilica of Peace.  It is built in the style common to cathedrals of the colonial period, and is reminiscent of the architecture found in the Spanish and Portuguese churches in the New World.  The centerpiece and sacred highlight of the Basilica is a statue of Augustine, inside of which is contained part of his relic, which was sent as a gift from the Church of St. Peter in Pavia, Italy.

The Basilica of St. Augustine in Annaba only houses a small portion of the theologian’s relic.  The rest is located in the Basilica of St. Peter in the Golden Sky in Pavia, Italy.  The Tomb of Monica his mother can be found at the Church of Sant’Agostino in Rome, Italy.