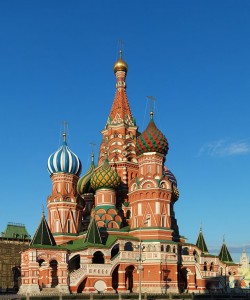 The Cathedral of St. Basil the Blessed is one of the great churches of Eastern Orthodoxy and the defining architectural symbol of the city of Moscow.  By some measures it has been hailed as one of the most spectacularly beautiful churches in Christendom and is certainly among the most recognizable.  It is often thought to be part of the Kremlin, Moscow’s great fortress, though it actually stands outside of the Kremlin’s walls.  Home to the Tomb of St. Basil, for which it is named, the cathedral has a history as colorful as its brightly decorated onion domes.  Although religiously not nearly as important as the Monastery of Trinity-St. Sergius, it receives far more visitors, especially in the form of western tourists.  St. Basil’s Cathedral is part of the Red Square UNESCO World Heritage Site.

St. Basil’s Cathedral can trace its origins to two historical events: the death of the Russian holy man known as Basil the Blessed, and the Russian conquest of the Khanate of the Kazars.  Beginning in the early 13th century, Moscow had spent the better part of three hundred years under the constant threat of the Tatars, who had occupied and/or sacked the city on a regular basis throughout this period.  Despite this Moscow remained largely independent from, if tributary to, the Tatars, and the city became a rallying point from which the Mongol yoke would eventually be thrown off of Russia.

Though Moscow became free in 1480, it would be another century before Ivan IV, also known as Ivan the Terrible, decisively defeated the Kazan Tartars and assumed the title of Tsar of all Russia.  The conquest of Kazan in 1552 coincided with the death of Basil the Blessed, a popular Russian holy man.  Basil, also known as The Fool, had become famous for his displays of piety and his charity towards the poor.  According to legend he publicly reprimanded Ivan the Terrible over his Christian devotions and got away with it, an act which apparently earned him the Tsar’s respect.  The legend goes on to say that Ivan personally acted as a pallbearer at Basil’s funeral.

In honor of Basil, who was all but assured of sainthood, and in tribute of his tremendous victory, Ivan commissioned the construction of a new cathedral, the most magnificent that had yet been built in Russia.  Under the direction of the brilliant architect Postnik Yakovlev, the work on the cathedral was completed in a mere six years.  According to a very famous but most likely false legend, Ivan was so taken with the beauty of the cathedral that he deliberately blinded Yakovlev so that the architect would never again create anything so beautiful.  However, since he is credited with the construction of many other edifices in Moscow and Kazan, Yakovlev almost certainly died with his sight intact.

The subsequent history of St. Basil’s Cathedral is one of amazing survival.  Barely a decade after its completion, the city of Moscow was destroyed by the last major Tatar invasion of the city.  Only the area around the Kremlin was spared.  The cathedral survived more than half a dozen other invasions and uprisings through the 19th century, including the burning of Moscow before the arrival of Napolean.  It even survived the Russian Revolution and the reign of Stalin, neither of which were particularly kind to Moscow’s landmark churches.  Today St. Basil’s Cathedral is once again the pride of the Russian Orthodox Church and one of the most popular tourist destinations in Russia.

St. Basil’s Cathedral is a tented church along the lines of those that were popular in Russia in the 16th and 17th centuries.  The exterior of St. Basil’s is absolutely unique in Christendom, even by tented church standards.  It appears almost more like a fairy tale palace than a major Orthodox house of worship.  Its pink and white walls are crowned with a series of breathtaking onion domes, each as individually and colorfully decorated as a Faberge Easter egg.  The great central tent steeple that dominates the cathedral is crowned by a smaller golden dome and topped with a cross.

The interior of the cathedral is no less spectacular than the exterior.  The church consists of nine interconnected chapels, each one designed to commemorate one of Ivan the Terrible’s victorious battles.  Each of these chapels is dedicated to the saint on whose day a particular battle was won.  St. Basil’s Cathedral is practically a wall-to-wall art gallery, featuring hundreds of paintings and pieces of art which cover the entire interior surface, including the domes.  The religious highlight of the cathedral is the Tomb of St. Basil the Blessed, whose chapel was added on to the cathedral a few decades later.

St. Basil’s Cathedral dominates the great plaza known as Red Square, right in the heart of Moscow.  It is a stone’s throw from the Kremlin, the Lenin Mausoleum and the GUM department store, and is very accessible both on foot and by Moscow’s extensive public transportation system.  The cathedral is open daily from 11:00am-7:00pm.  Admission is R100.  Web: www.saintbasil.ru (official website)

Until the arrival of communism, Moscow boasted one of the world’s largest collections of churches.  While many did not survive the 20th century, government officials at least had the foresight to preserve the most important and beautiful sites.  The city’s focal point is the great fortress of the Kremlin, which includes within its walls the Annunciation Cathedral (the private church of Russian royalty), the Archangel Cathedral (where many early Tsars and aristocrats are buried), and the Church of the Deposition of the Robe.  The Cathedral of Christ the Savior and the Kazan Cathedral are both post-Stalin reproductions.